Last week’s news about a move by Washington & Jefferson men’s water polo team from the staid Collegiate Water Polo Association (CWPA) to the mighty Mountain Pacific Sports Federation (MPSF) struck like a thunderbolt. How can a DIII program at a small, highly-selective private college in Pennsylvania stay afloat against reigning national champions Cal, Stanford, UCLA and USC—among the country’s most competitive athletic programs?

It won’t be the first time.

In 2015, with the conference reeling from the defection of five member schools to a newly created men’s group in the Golden Coast Conference, former MPSF executive director Al Beaird hatched a bold plan. Instead of targeting top-notch DI programs, Beaird looked to overlooked programs to preserve their conference’s automatic NCAA berth. In 2016 Penn State Behrend, a DIII men’s team located in Erie, PA—2.500 miles from the California coast—joined the Big Four.

At the time, I questioned how this would work, and I dare say I was right. Over the past few years this hybrid has done little to help Austin and Penn State—it might be argued that the PSB Lions, who have lost 29 of their last 30 matches, have not benefited at all.

[While Its Women Compete for Championships, MPSF Loads Up on Men’s Water Polo]

Last Friday I got on the phone with Nikola Malezanov, W&J men’s and women’s coach. How did his women’s team fare in last weekend’s CWPA Division III Championship? What’s his take on the upcoming polo boom in Texas, where next fall as many as 200 high schools will play for a state championship? And how does he justify the Presidents’ conference relocation—where they’ll always be in the MPSF’s second division?

– Was this weekend’s CWPA Division III Championship the one you needed to get one of two spots in the DIII National Championship in California?

Yes, this is the tournament where we had to take one of the top two.

– Do you feel your women’s team had progressed to that level?

We were working towards that. There was an obvious upwards catch at this championship where the West and East regions of the CWPA come together. The West showed up and dominated the East. They were just a little bit too tough for us to handle. 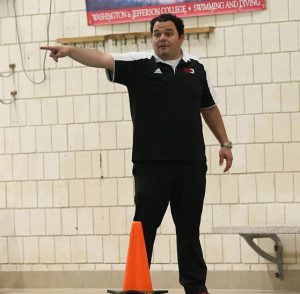 One of our season goals was a spot at the nationals. We understood that Austin College was a level above the rest conference. We were hoping we could compete with everyone else. We just need a little more experience in handling challenging games. We finished in sixth place. We have a young team [with] eight freshmen and only two seniors. Hopefully, this will pay dividends in the future.

– As a DIII school, the learning curve is different than for DI programs which expect their athletes to come in with more experience and skills.

One exercise or approach does not fit everybody. We have to be creative to provide an environment where everyone tries to improve within their own levels—and that’s not easy to do. Especially with the limited amount of training we have as a DIII program.

Building a culture and building a team helps. If we can have our more experienced players guide everyone else, that’s half the job. Everyone has to buy into the process.

– You mention that Austin’s the team to beat in the CWPA. Can he tap into what’s the big unknown in the state of Texas: the thousands of high school athletes who will compete for a sanctioned state championship for the first time this fall?

I don’t think that is the only factor. Mark is a great coach and an excellent recruiter. He built a very strong team, and it will be a challenge to get close to them.

I believe that the development in Texas is going to help Mark [Lawrence, Austin College head coach], But I think that Texas has a long way to go. They’re definitely on the path to becoming a dominant area. I don’t think it will come as quickly as most people predict.

There’s no doubt that quality will come out of quantity. In deference to the huge increase of teams participating, I think the coaching level has to improve as well. Texas has some great coaches— better than in most areas—but they don’t have 200 or 300 coaches that can cover the number of programs that will be added there.

I believe a lot of those programs that are added will struggle to find proper guidance in terms of high-level water polo. As far as players’ experience, playing the sport, and development, I think they’ll be just fine and on the growth path.

I believe it’s going to take a little bit longer than most people think. I hope I am wrong.

– Let’s switch gears and talk about the big topic: next season the Presidents will join the MPSF—California-based water polo conference that contains the nation’s best DI programs.

It’s a question that solves our scheduling goal to play a mostly DIII schedule. The situation we were in prior to this move is that we were in the CWPA Mid-Atlantic Western Division. We were surrounded by local teams, but they are all Division II. There was not a single DIII team that we get to play in that conference. 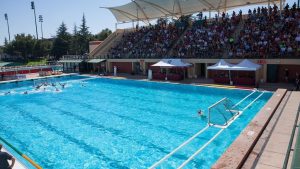 All the DIII games we played were invites or scheduled non-conference games.

This move puts four DIII teams under the same umbrella. We will have our DIII conference schedule where we play each other twice throughout the season. At the [MPSF] conference championship we’re all going to cross at least once with one of the DI programs each and then we’ll crown an MPSF DI and a DIII champion.

If another conference would have provided that, we would have gone [there]. There’s no question we wanted to have an exclusive DIII conference, just like on the women’s side. But that was not possible on the East Coast on the men’s side. This was our way to at least have four of us under the same umbrella. Being able to accomplish that and share a conference with the great USC, Stanford, UCLA, and Cal is a win-win for us.

– I don’t believe any other NCAA sport has the same overlap between DI, DII and DIII programs… and it is ironic that your program has to go not only to California but to the most competitive conference in the country.

At Conference Championship, it’s safe to assume that the DI schools will be the top four seeds and the DIII teams are the bottom four seeds. We’ll start with the quarterfinals; assuming that the Dis will beat the DIII then, there will be DI 1-4 semifinals and the DIIIs fifth place semifinals.

We will not play regular conference games with the DI prior to the championships.

– Which is what Austin and Penn State Behrend negotiated when they joined the MPSF in 2016—a maneuver for the conference to preserve their automatic NCAA qualifier. When I spoke to Joe Tristan about this move, he said joining the conference would raise their program’s profile.

[Penn State-Behrend’s Tristan Talks About Lifeline to the MPSF]

Does this membership preclude W&J from looking to connect with schools like Johns Hopkins and MIT to form a high-level DIII conference in the East?

I’m not sure of a quick payoff. We all know that conference realignments happen relatively often. We are now committed to MPSF and hope for a good experience [there]. I can’t speak on behalf of the conference about whether or not they’re looking to add more programs. As of now, [we] four are the solid ground to be part of [MPSF]; the other DIII programs on the East Coast have their homes they are happy with.

Us coaches—including all the East Coast DIII teams—have agreed in the past on a schedule that we’ll try and play each other as much as possible. We’ll still have [CWPA] DIII Easterns and go from there.

This move is in the best interest of our school. I made sure that our Mid-Atlantic conference peers understood the reasons for this. I believe we separated on good terms and will try and play our local opponents—even though they are DII—a couple of times a year in invite tournaments.

– Was there any discussion of Hopkins and MIT joining the MPSF fold? They’re the main rivals to represent the East in the DIII nationals—and six is the magic number when it comes to NCAA conference alignments.

I don’t want to speak on behalf of those schools. It seems to me they’re happy where they are.

– What sort of financial responsibility does membership in the MPSF incur—including a trip to California every November for their championship.

I am not sure I could share the details of our arrangements. I can say that the impact of this move on our budget was not significant. We already travel to California every year to Pomona and the Gary Troyer tournament. If we have to switch to going in November instead of October, we’ll adjust to that.

We’ll go within our budget. We just hope we can possibly fit two California trips every season.

Like other DIII teams, we have players from California on our roster. When we go and play there, it’s important [for our players’] families to watch them play, support them and host dinners.

It’s important for us to have that and, as we know, the majority of water polo players who want to continue their careers in college are in California. For us to have some presence by participating in games there is important.

– When I spoke with Coach Tristan, he said it was important for recruiting to be out in California, but that has not paid off for his men’s or women’s programs. How does this move help augment your recruiting—given that you’re a national team coach for the Cadets?

I honestly don’t think this is going to be a game-changer in recruiting. It is definitely a new thing, and I have to learn how to present that to recruits. It’s a different environment so I hope it gives us a little bit more exposure. In the end, the academics and location of the school, me as a coach, and the team vibe—all drive recruits to commit. Being part of MPSF might get us more looks but I don’t think it will be a game-changer for recruiting. 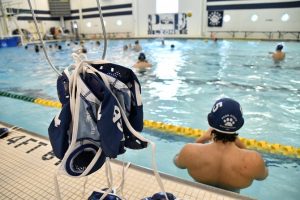 DIII sports, in general, are important to those athletes who have academics as a priority. I doubt we’ll have commits come to our school just because we are MPSF. A combination of other factors will have to play in as well.

I hope it will help; I just have to learn how to play it.

– How does your new conference alignment impact what is perhaps the most attractive goal for programs like yours, which is the DIII national championship shepherded by USAWP in 2019?

It doesn’t impact the eligibility. As it currently stands, we have the Division III Easterns that will involve the MPSF DIII schools and the other three East Coast DIII programs—where two teams from the East will advance to the Final Four. Nothing has changed there.

The [MPSF] conference tournament extends our season by a week or two. In case we make the nationals [it] will give us an extra two weeks of training and games closer to those nationals than it has in the past.