While Its Women Compete for Championships, MPSF Loads Up on Men’s Water Polo

In a statement last week, MPSF Executive Director Foti Mellis announced that the MPSF men’s bracket will be expanded by two: Augustana, a year-old DIII program in Illinois, and Washington & Jefferson, another DIII school located in polo-rich Northwestern Pennsylvania.

“I am excited to welcome Augustana College and Washington & Jefferson to the MPSF as the newest members of our conference,” Mellis said. “The continued growth of the conference means the creation of new competitive experiences for our coaches and student-athletes. Adding two new members allows the MPSF to expand its conference championship tournament resulting in the opportunity to crown DI and DIII champions.

“We look forward to stellar contributions from the Vikings and the Presidents as they join the top water polo conference in the country,” he added. 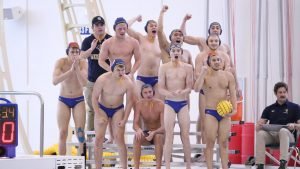 Stellar contributions is—for now—hyperbole on Mellis’ part. Last year W&J was 9-12—and three of those wins came against Penn State Behrend, which lost all 21 matches in 2021. Neither Augustana nor W&J was ranked in the Collegiate Water Polo Association’s (CWPA) varsity polls—unlike the MPSF’s primary men’s water polo members. In 2021 Cal was the nation’s #1 team—and NCAA champs—while USC was #2 as well as a runner up in the national championship match. UCLA and Stanford, the last two of the MPSF’s “Big Four,” followed at #3 and #4.

Despite the daunting prospect of being in a conference with the country’s best, Augustana’s Ryan Pryor, who over the past two years has built a men’s and women’s DIII program from scratch in Rock Island, Illinois, was ecstatic.

“We’re excited to be joining the premier water polo conference in the country,” said Pryor, whose women have enjoyed great success in their first season. “The move will help us maintain a strong Division III regular season schedule while also getting to compete against the top Division I teams in the country. This new league affiliation will allow us to continue to enhance our competitive position nationally.

[Augustana’s Ryan Pryor: Making the Move to the Midwest for Water Polo]

“We look forward to competing for MPSF Division III championships for years to come,” he added.

As a takeaway, this is noteworthy. The MPSF now totals eight teams—in addition to the Big Four, the aforementioned Penn State Lions as well as Austin College in Sherman, Texas, both DIII programs—are members. At the MPSF Championships the conference’s bottom four will battle to be the MPSF’s top DIII team.

This will not preclude any of these four programs from competing for the DIII national championship, where the top two teams from the East and the West clash for top honors.

Last season the Augustana men played without a conference affiliation—though given geographic proximity it appeared likely the Vikings would join the CWPA’s Mid-Atlantic West conference. One of whose members was the Presidents of W&J, now on the move for greener competitive pastures.

“This is a great day for W&J men’s water polo,” Nikola Malezanov, head coach for the President’s men’s and women’s program, said in a statement. “We are happy we found a home to share with our Division-III opponents and outstanding Division-I programs. PSB, Augustana, Austin and W&J share the same conference in women’s play, and we look forward to continuing our rivalries on the men’s side as well, under the MPSF’s umbrella. Needless to say, it will be an honor to play against the premier Division-I programs in the country as well.”

A big change in fortunes for the W&J Presidents? Photo Courtesy: W&J Athletics

Penn St. Behrend—one of W&J’s local PA rivals—and Austin were enticed to the MPSF in 2016. This was a reaction to the defection of five programs who joined with a reconstituted San Jose State program to form a men’s bracket in the Golden Coast Conference (GCC).

[Penn State-Behrend’s Tristan Talks About Lifeline to the MPSF]

In an interview from 2017, PSB Head Coach Joe Tristan said that the exposure of playing with the country’s best teams would bring helpful attention and recruiting opportunities. This has not played out as hoped; besides being winless in 2021 the Lions have lost 29 of their last 30 matches.

Austin has fared better in its four-year MPSF affiliation, including an 8-9 record last season, though four of the Kangaroos wins came against the Lions, including two at the MPSF men’s championship last November in Stanford’s Avery Aquatic Center.

In a separate interview, Malezanov clarified why a change now made sense for the Presidents.

“This move puts four DIII teams under the same umbrella,” he said last week in a telephone conversation. “We will have our DIII conference schedule where we play each other twice throughout the season. At the [MPSF] conference championship we’re all going to cross at least once with the DI programs and then we’ll crown an MPSF DIII champion.

It’s ironic that four of NCAA polo’s least successful programs—all from the middle of the country—need to connect up in California with the nation’s mightiest conference to find optimal chances to succeed.