In a surprising though not unexpected decision handed down last Friday, Jovan Vavic, the winningest water polo coach in NCAA history, was convicted by U.S. District Judge Indira Talwani of accepting bribes in conjunction with the massive college admissions fraud case commonly known as “Varsity Blues.”

Sentencing for Vavic, now 60 years old, will likely be delayed as he is expected to appeal his conviction.

USC men’s and women’s coach for 25 years and whose teams captured an NCAA-record 16 titles—ten men’s and six women’s—Vavic was abruptly fired in March 2019 due to accusations of complicity in William “Rick” Singer’s scheme to falsify the athletic accomplishments of applicants to elite American universities.

Among those schools was Southern California. Once considered a destination for affluent but academically indifferent applicants, in recent years USC has become one of the most nation’s most desirable academic institutions. It was a prime target of Singer’s efforts to circumvent admissions requirements by getting his clients’ children in through the “side door” by creating exaggerated or fake athletic pedigrees—and using bribes that sometimes totaled in the millions to entice university coaches and administrators to support his efforts.

A maverick often at odds with the American water polo community—a result of his much-debated recruiting practices and laser-focus on success—Vavic will now be sentenced to jail time, a tremendous comedown for a coach who in 2015 was tabbed as Pac-12 Men’s Water Polo Coach of the Century.

In reporting the story, Matthew Ormseth of the Los Angeles Times, pointed to demining evidence against the Montenegrin native. Former USC soccer coach, Ali Khosroshahin, who himself pleaded guilty for his role in the scandal, testified that when he met with Vavic in his office, his Trojan colleague offered pointed advice on lying about prospective applicants. “Fuck ‘em. Just do it. And tell them that they’re the best players you’ve seen.” 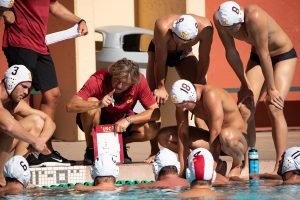 By hiring Stephen G. Larson—a highly regarded lawyer who served as a U.S. district judge and also as an assistant U.S. attorney in Los Angeles—and selling his multi-million-dollar home in tony Rancho Palos Verdes, Vavic signaled he was ready for the fight of his life.

Unlike in many NCAA finals appearances—a total of 25 for the men and women’s programs, including a remarkable 14 straight NCAA men’s title matches—the legendary coach lost this round. Decisively.

As the last of the Varsity Blues cases to go to trial—in all 56 parents as well as Singer, the operation’s mastermind, were indicted by U.S. federal prosecutors—it possible that Vavic’s punishment will be the case’s harshest. The longest previous convictions was to John B. Wilson, given a 15-month prison term for paying more than $1.2 million so that his son and twin daughters, sporting embellished athletic credentials, were admitted to USC, Stanford and Harvard.

Ironically, Wilson’s son was admitted to Southern Cal to play polo for the Trojans but quit the team after his first semester.

Ghoulishly, anonymous posters at Water Polo Planet have posted a poll regarding how many years of prison Vavic will serve. It should be noted that many of the participants of the WWP message board are parents of athletes whose children were beaten by Vavic-coached teams in NCAA competition—which makes their glee at their antagonist’s downfall all the more repulsive.

It’s the sport itself that suffers at the plight of one it’s most notable practitioners. Vavic may have been a controversial champion, but so have a number of NCAA winners—not the least of whom is the Wizard of Westwood himself. John Wooden, with ten NCAA men’s basketball titles while coaching UCLA, is considered a gold-standard for American collegiate success. Sports columnists have noted that Wooden was supported in his efforts by Los Angeles businessman Sam Gilbert, who sought to steer top players, including Lew Alcindor—now known as Kareem Abdul Jabbar—to Bruins’ basketball.

There’s little doubt that justice was served in Talwani’s Boston’ courtroom—but it’s also clear that the toppling of a towering figure in U.S. polo diminishes the sport for all.