A Rarity for This American Abroad: LEN Champions League Water Polo in Barcelona

It was like something out of a dream—albeit one where water polo is the star.

A packed house in a stunning aquatic facility. Players including Marco Bijac and Filip Filipovic facing Daniel López, and Felipe Perrone. Fancy lighting effects and an announcer’s booming out each goal. Television cameras streaming the content throughout the ether on Eurovision.

It’s LEN Champions League play, it happens every week throughout Europe, and it provided an unexpected delight during a brief trip to Spain.

This was professional water polo—something barely imagined in the U.S.—a contest between Club Natació Atlètic-Barceloneta and Olympiacos at CNAB’s Plaça del Mar facility on the Balearic Sea. And even though the final score of 9-5 went in favor of the host Zodiacs, in my opinion everyone won on a brilliant night on the Barcelona coast. 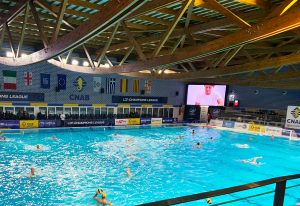 Having watched American collegiate water polo almost exclusively, the idea of live professional play is entirely foreign to me. I’ve covered national team competition in Europe and South America, but there’s nothing like sitting in the stands for Champions’ League play. Professionals playing does NOT happen state-side—and hasn’t been seen since FINA’s World League held women’s competition in La Jolla, CA in 2010 and a men’s tournament in Long Beach, CA in 2004.

That’s a long time ago. There was a plan for FINA to hold Men’s & Women’s Intercontinental Cup tournament in Indianapolis in April of 2020 but it was scuttled by the COVID-19 pandemic. Currently, there’s no plan for FINA competition—which includes national team players who are also professionals—in America any time soon.

For this American, it’s thrilling to see such high caliber polo played—and raises the question of what it will take for the U.S. to jump on this bandwagon.

First, to the action. Seeing many familiar faces was a bit jarring; having been told of the match a few hours before, I was not prepared for what was to come. Filipovic is the greatest player of this generation with two Olympic gold medals, two bronzes and two world championships playing for Serbia as well as three Champions’ League titles with Pro Recco. To watch the now 34-year-old attacker in the water is a huge thrill comparable to seeing LeBron James play for the Lakers. 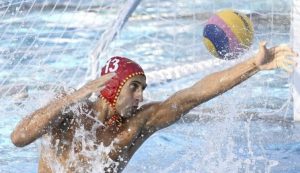 Unai Aguirre—man of the match in Barcelona and future of Spanish water polo. Photo: Atlètic-Barceloneta

Throw in Bijac, a silver medalist with Croatia at the Rio Games, and also a Champions’ League cup winner last year with Pro Recco, and members of Greece’s silver medal entry at the 2020 Tokyo Games—including Olympic captain Ioannis Fountoulis, Konstantinos Genidounias, still the all-time leading scorer at USC, and Thodoris Vlachos, the Greek national team head coach since 2014—and it was clear that Olympiacos is brimming with talent.

But the host Zodiacs were more than equal to the task, even with Lopez, Spanish national team goalie, sitting in favor of 19-year-old phenom Unai Aguirre. They were led in the water by Peronne, a Brazilian who played for Spain in the 2008 and 2012 Olympics then switched to his birth country for the Rio Games.

Head coach for CNAB was none other than Elvis Fatovic, former Croatian national team player and assistant coach who has recently returned to the continent after two Olympics with the Australian men. From “Down Under” Fatovic brought Luke Pavillard, a young lefty who stared at Pacific and just missed the Sharks’ roster for the Tokyo Games.

CNAB got on the board in the first minute and a half, when Alvaro Granados beat Bijac in front. When Marc Larumbe scored on a skip a minute later, the home team had an early two-goal advantage and were never headed. Olympiacos got a power play score from Genidounias with a minute remaining but stayiong within two scores in the second period was as close as the visitors got. 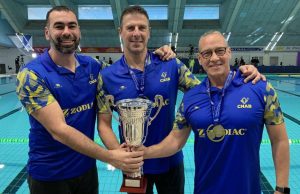 A Zodiac two-goal lead at halftime doubled in the third as Pavillard scored early and Peronne late, so when the teams traded goals in the fourth period the result was a 9-5 victory for the home side. Larumbe had two scores for CNAB; the wondrous Filipovic notched two for Olympiacos, including an eye-opening blast that he casually flicked side armed past his defender that fooled the otherwise brilliant Aguirre.

Afterwards, CNAB players posed for photos with their fans, while Fatovic—whose Spanish has yet to get up to local’s rapid conversational pace—moved into a lounge to mingle with supporters and club officials.

The home team’s accessibility was both charming and impressive—and is also a feature of our collegiate polo scene. But not for U.S. pros; the Spaniard’s familiarity emphasized how ingrained the sport is in this polo-mad city. It’s something that might give American fans pause as they wonder how to best expand their beloved sport in one of the world’s largest entertainment markets.