A trip this weekend to California—for matches Friday and Saturday against four opponents—will provide LIU’s women’s water polo team critical feedback in its quest for the 2022 Metro Atlantic Athletic Conference (MAAC) title and a trip to the program’s first-ever NCAA tournament.

If their recent effort against Top-25 opponents #19 Princeton and #20 Harvard is any indication, the Sharks, ranked #22 in this week’s Collegiate Water Polo Association poll, possess ample talent and desire. As LIU Head Coach Gabby Juarez sees it, the wins will come… in time.

“This is a good learning moment for us, early in the season,” she said. “We still have time to grow and adjust”

Juarez, entering her fourth year with the program she launched, lauded her team’s effort while preaching patience after tough losses to the Tigers and the Crimson at the Princeton Invitational.

“It’s a really good for us to know that when we’re down, we can pull out a fourth quarter tie.” Juarez said after her team rallied late from a three-goal deficit at Princeton earlier this month. “We play with a lot of heart. which is amazing to see as we prepare for [conference] games against Wagner [and] Marist.”

#14 Wagner is currently the East’s top-ranked team in the latest CWPA Top-25 poll while #25 Marist is defending MAAC champions—making the Seahawks and the Red Foxes LIU’s biggest obstacles to a MAAC title.

Despite a miraculous last second goal that propelled them to overtime on the first day of the Princeton Invitational, the Sharks dropped one-goal decisions against the host Tigers and fellow Ivy Leaguer Harvard. They lost 17-16 in overtime to Princeton. Against the Crimson, LIU fell behind 5-2 and never caught up, losing 9-8.

A 14-9 win over Mount St. Mary’s on the Invite’s final day put the Sharks at 5-4 overall. With two weeks off Juarez and her players prepared for what might be a season-defining trip to California for the Tina Finali Invitational, hosted by Cal Lutheran. LIU opens Friday against Cal Baptist, then will play Cal State Monterey Bay that afternoon. The sharks conclude their trip Saturday with matches against DIII Austin College and #23 CSUN.

All four matches are winnable for an LIU squad that has thus far proven resilient. The Sharks opened their season at Michigan with an upset of then-10th ranked Indiana. They have also lost to #1 UCLA and #4 Stanford.

Miraculous shot is not enough


The match against Princeton—which saw LIU’s Jeannet Garcia nail an incredible half-tank shot right before the final buzzer—highlighted the Sharks’ strengths and weaknesses. They battled a young Tiger squad that features freshmen Jovana Sekulic and Grace Houlahan along with sophomores Kaila Carroll and Kayla Yelensky.

Garcia, who collected three goals against Princeton, was almost speechless following an impressive rally that fell just short after the visitors scored twice in the final 46 seconds. 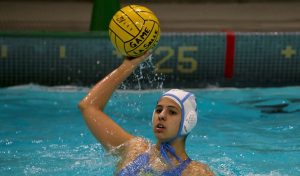 “I cried after,” Garcia said about her long-range score. “I couldn’t believe I had made it.”

Then, analyzing her team’s performance, the third-year player from Hialeah High School opined that: “There’s so many things we still need to work on.”

With Garcia, Paola Dominguez, Kate Hinrichs—one of the last cuts from the South African 2020 Olympic squad—Jessica Dean, last year’s leading scorer, and Elena Camarena, like Dominguez a preseason pick for MAAC player of the year, Juarez has more than an enough offense to contend with any team not in the country’s top ten.

But, as Camarena acknowledged after she and her teammates surrendered 11 goals to the Tigers in the second half: “We have to work a lot on defense because when a team scores on you 17 goals, it’s really hard to win.”

Against Princeton there were defensive breakdowns that allowed the Tigers to swarm goalie Julia Zebak on breakaways. Luckily, there’s time to adjust; LIU enjoyed a two week break before their California trip. After they return home there’s a weekend in Cambridge for the Harvard Invitational before the Sharks’ first MAAC match of 2022—also their first-ever against cross-borough rival St. Francis Brooklyn. Despite being a mere 10 city blocks apart, the two programs have never met due to the coronavirus pandemic which impacted play the last two seasons.

After St. Francis on the 19th, LIU travels to Poughkeepsie the next day to face Marist, defending MAAC champs. In one prior meeting (2020), the Red Foxes scored a decisive 16-8 win.

Camarena—who notched five scores against Princeton, giving her 19, second on the team to Dominguez—said: “Every team wants to win every game, but I think we’re getting better every game and that’s what we need to do for conference.”

In perhaps the understatement of this young season, Dominguez, who has paced the Sharks this year with 26 goals, said: “We’re not going to give up easy.” 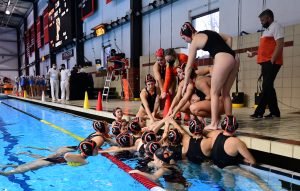 Acknowledging there’s a chip on her team’s collective shoulder, a result of missing out on the 2021 MAAC Championships despite sweeping to a regular season title, Dominguez explained that her team comes into 2022 “stronger than ever.”

“[O]ur juniors are going into their third year and they haven’t even had a full season yet because of COVID, we couldn’t finish our season,” she said.

They will need to be at their best to topple a Wagner program that has lost one MAAC match in its last six years of conference play—by forfeit after MAAC leadership decided the Seahawks had played a non-sanctioned conference match against Marist. The Sharks and Seahawks have yet to meet due to COVID restrictions. Wagner sat out the entire 2021 season.

The Sharks and Seahawks meet on March 27 in Staten Island and again on April 15 in Brooklyn.

Hialeah in the House

At the core of a deep LIU roster is a trio of players that excelled for Hialeah High School. Dominguez, Garcia and Alejandra Aranguren were mainstays of a Thoroughbreds squad that captured the 2018 Florida girls’ state water polo title—the first time a public high school had ever captured top girls’ polo honors in the Florida High School Athletic Association (FHSAA) competition.

Alex Donis – who coached that Hialeah team for more than a decade before seeking other polo opportunities—said recently that Aranguren, Dominguez and Garcia will “always be my girls!”

[On The Record With Alex Donis, Coach for Hialeah Storm and Hialeah High School Water Polo]

“Jeannet’s come into her true form on the offensive side, not having to defer anymore to other people,” he said, then continuing his scouting report, said: “To me Paola’s one of the best shooters in the country. 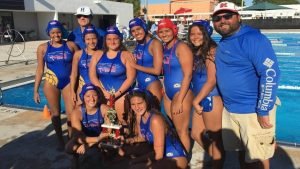 About Aranguren, who has been pushed to the second team thanks to great recruiting the past two seasons, Donis said: “Alejandra always knew she wasn’t going to play center for four quarters. She did a good job coming off the bench and accepting [that role].”

The former Thoroughbreds’ coach issued a warning—obviously biased—regarding what the rest of the MAAC should prepare for this season: “Everybody is in for a big surprise come the end of the season.”

Camarena, who may be her team’s most important player, added that: “In conference we want to be the best version of our team.”

Her coach pointed out just what that will take.

“[We’ll] adjust to the little tweaks we have to make… make those tweaks and we have the potential to win a MAAC championships.” Juarez said.