In the movie “Being John Malkovich,” the titular character’s mind is inhabited by a rag-tag bunch of friends and lovers to hilarious effect. One takeaway is that Malkovich, playing a satirical version of himself, is unknowable because his mind and actions are always being directed by others.

This cannot be said of John Vargas, the head men’s coach at Stanford the past two decades, who this week announced his retirement from one of the most prominent jobs in American water polo. But for someone who has been opportunistic regarding career opportunities, the sudden conclusion of his time on The Farm is stunning.

Speculation immediately focused on who would replace Vargas, a two-time NCAA winning coach—and third as a player at UC-Irvine—who was the U.S. men’s national team head coach for the 2000 Olympic Games in Sydney. He also represented America as an athlete at the 1992 Barcelona Games.

But it’s as a Cardinal that Vargas, who turned 60 last June, made perhaps his biggest impact. He succeeded Dante Dettamanti, who during a quarter century in Palo Alto won a then-record eight NCAA titles, including a championship in 2001, his last year at Stanford, with Tony Azevedo leading the Cardinal to an 8-5 win over UCLA. 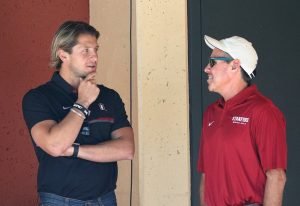 Tony Azevedo and John Vargas in an undated photograph.

Azevedo—the only four-time winner of the Cutino Award, given to the country’s top collegiate player—would play three more year at Stanford, helping the newly installed Vargas to a title in 2002. It would be 17 years before the Cardinal and Vargas won another. In 2019 a team headlined by Ben Hallock dominated Pacific 13-8 to give Stanford an 11th men’s polo crown and the school’s 18th combined men’s and women’s titles.

Vargas’ time in Palo Alto saw a significant shift in NCAA polo, ones which tilted the collegiate game away from the Cardinal men. Vargas, recruiting almost exclusively among American athletes from California, could not counter the influx of foreign-born players that USC’s Jovan Vavic, among others, employed to win national championships. As a result, the Trojan men captured nine NCAA titles from 2003 to 2018, including an NCAA-record six straight. In four of those NCAA finals, USC topped Stanford.

UCLA captured five titles in that time, the last one in 2020 made possible by Nicolas Saveljic, a native of Montenegro and the 2020 Cutino winner. Perhaps the most damaging transformation came at Cal, Stanford’s bitter rival from the Bay Area. The Golden Bears won four titles during Vargas’ time as Cardinal coach, including last year’s final. In building that success, Cal coach Kirk Everist has developed talent pipelines to Greece and Spain.

Despite being the country’s top destination for American athletes, it’s not entirely Vargas’ fault that Stanford has fallen behind in the race for top NCAA men’s polo talent. Perhaps the university’s exceptional academic standards hamper international recruiting. 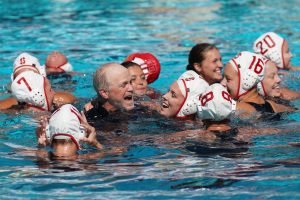 There are two points that contradict this interpretation, however. First is that Vargas’ colleague, Cardinal women’s head coach John Tanner, has not had any problems building NCAA water polo winners. In 24 years on The Farm, Tanner has delivered seven national championships. The current Cardinal team, ranked at the top of the CWPA polls, is a favorite for yet another NCAA title.

The other push-back against the idea that only Americans can gain admission at our nation’s top universities is Harvard’s and Princeton’s recent polo success. On Harvard’s current roster is Mot Stothart, a sophomore from Barcelona who played high school polo at Harvard-Westlake. Also, Andrej Basica, who grew up and played polo in Serbia, was a significant contributor for the Crimson in this, his first year in Cambridge. The Crimson have qualified for NCAAs in three of their past five seasons of competition, including a 29-win campaign in 2019.

[A Big Splash In An Unfamiliar Pool]

Not only has this quartet succeed at Princeton polo—Harry Moross, an attacker from England, and Matej Sekulic, Serbian-born, but U.S. educated are on the squad—proved decisive in the Tigers quest for success, Litvak has said that his foreign-born athletes are as motivated as any American to excel in the classroom. He affirmed that foreign-born athletes value the academic opportunities an Ivy League institution offers, and specifically chose Princeton because there’s life after water polo.

Which brings us back to Vargas, a water polo lifer who will now have a lot of free time on his hands. He’s submitted his final exams to his former employer; Stanford’s recruiting class is complete, and—perhaps coincidentally—contains Jack Merrill, one of the first East Coast athletes to gain admission to Cardinal Polo during Vargas’ tenure. Merrill is also a member of the Canadian junior national team and has spent the last few months training with a Hungarian club.

It’s possible that the quintessential American—representing his country as both player and coach—waited until the end of his tenure to change his recruiting ways, then decided it wasn’t worth it. Much like the main character in “Being John Malkovich,” we’ll likely never know what Vargas truly thinks.

CORRECTION: Tony Azevedo played at Stanford from 2001 – 2004, winning NCAA titles in his freshman and sophomore years.