Prognostications are easy. Look at some facts, pick a side and explain why. That’s how I felt so confident that Stanford and USC were head (and shoulders!) above the rest of the polo pack early in this women’s water polo season.

Boy, was I wrong—and the Cal women delivered that message emphatically last weekend. A fantastic match between the Cardinal and the Golden Bears came down to a hustle play by Cal freshman Jessie Rose, who pushed the ball past Stanford goalie Maya Avital in sudden death, giving the Bears a dramatic early season win over their biggest rival. Cal then followed up their biggest win (so far) of 2022 by beating MPSF rival Arizona State 11-6, their second win this season (both non-conference) against the Sun Devils, who last season kept Simmons’ team out of NCAAs.

It’s now officially a THREE team race for a national championship—and more will be revealed as the season unfolds. It should be observed that over the past decade Stanford and USC have traded the NCAA title; the last time either one of them did not finish the season on top was 2009, the last of UCLA’s five-straight titles.

Oh, and Cal has NEVER won a national championship in women’s polo (their men have captured 15 including the 2021 crown last December); perhaps this is the year of the Bear!

Following is a breakdown of this week’s Collegiate Water Polo Association varsity women’s poll. There are two major tournaments this weekend; the Triton Invitational, hosted in La Jolla, California by UC-San Diego, and the Princeton Invitational in New Jersey.

1) USC (4-0); The match that doesn’t show up in their record is the Trojans’ 13-7 over UCLA in the annual scrimmage between the two crosstown rivals. After beating #8 Fresno State on Friday and #11 San Jose State Saturday morning, USC jumped out to a 5-2 advantage over host UCLA before the Bruins evened things up at five-all. A second half burst proved decisive for SC; this weekend Head Coach Marko Pintaric’s team travels down the coast to La Jolla for the Triton Invitational; first up on Saturday is #16 UC Santa Barbara.

2) Cal-Berkeley (11-0); Coralie Simmons has led the Cal women in Berkeley for six seasons, one of which was lost to COVID. In those previous seasons, there were big wins—but at no point did it seem that the Golden Bears had enough firepower to knock off either USC or Stanford for an NCAA title. Last weekend proved they do now; Cal’s 10-9 win looks to upset the women’s polo pecking order that has existed the last decade. Off to their best start during the Simmons era behind the spectacular play of goalie Isabel Williams, the Golden Bears rest this week before their first MPSF match of the season against USC in Los Angeles.

3) UCLA (11-0); Like Cal, the Bruins have also gotten off to a fast start. Unlike the Golden Bears—who have beaten Top-25 teams in every one of their victories—UCLA has padded its schedule with wins over unranked teams Salem and Ottawa. Tomorrow in La Jolla is another gimme; Santa Clara as part of the Triton Invitational. The competition will get exponentially more difficult on Sunday, with the undefeated Golden Bears looming. 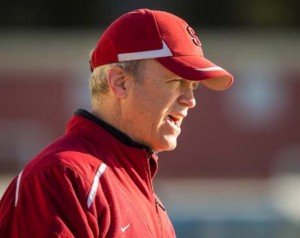 4) Stanford (7-1); The polo juggernaut that is the Cardinal was temporarily derailed last Saturday, when Makenzie Fischer and company were surprised by a Cal team hell-bent on an upset. A loss here and there is unlikely to ruffle the Cardinal feathers; Head Coach John Tanner knows how to get the best out of his team, and he has three weeks to figure that out before the Barbara Kalbus Invitational at UC-Irvine. Not only is Tanner sure to use it wisely, he’ll fully integrate both Fischers—Aria, like Makenzie is a two-time Olympian—back into the program after two years away training with the USNT.

5) Michigan (5-3); After an off week, the Wolverines get back in the water at the Triton Invite. They’ll face Pomona-Pitzer and—baring a monumental upset—will get the winner of the Loyola Marymount / UC-Davis match. Also participating in this are #1 USC and #3 UCLA, among many others. It’s not imperative for Head Coach Marcelo Leonardi’s team to get victories against such lofty opposition, but Michigan will also participate in the Kalbus Invite two weeks later, where the competition will be even steeper.

6) Hawai’i (3-1); Even though COVID is retreating throughout the country, that doesn’t mean it hasn’t had its impact in polo. Hawai’i lost games early in the season to the pandemic; now they’re playing catch-up with their NCAA peers. That starts this weekend in La Jolla, where they open with CSUN on Saturday, the first of four matches over the weekend.

8) Fresno State (4-7); Following tough—but competitive—losses to #1 USC and #3 UCLA, the Bulldogs got to beat up on #11 San Jose State, which they did 15-9. Freshman Fanni Muzsnay (29 goals, 12 exclusions drawn, 11 steals) has been a dynamic offensive player for FSU. But check out Emily Nicholson’s stats: in addition to 16 goals the redshirt senior has 43 exclusions drawn; that four a game. Head Coach Emily Benson has taught her well; now the Bulldogs rest for a week until they host their own invite starting February 19.

9) Arizona State (4-6); After a split last weekend at Stanford—wins over #10 UC-Davis and #18 San Diego State and losses to Stanford and Cal—the Sun Devils return to their comfortable desert abode for matches Salem and Cal State East Bay. These will be easy victories but won’t wipe away that ASU’s path this year to NCAAs may be through UCLA and not Cal.

10) UC-Davis (5-3); The Aggies will join the smart polo crowd in La Jolla; what’s key to consider is which top teams they’ll face at UC-San Diego. They open with Loyola Marymount; a win gets them into a match against Michigan, a loss puts them in the losers’ bracket against Pomona-Pitzer. They’re likely to run into some of their Big West foes this weekend as CSUN, Hawai’i, Long Beach State, UC-Santa Barbara and the host Tritons will all be in the water. 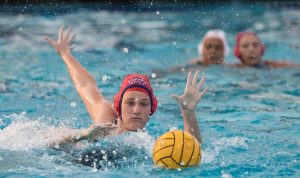 The Bulldog’s Emily Nicholson has enjoyed a great start to her senior season in Fresno. Photo Courtesy: Fresno State Athletics

11) San Jose State (6-6); NOT making the trip south are the Spartans. They have non-conference foe Cal State Monterey Bay on Saturday and will prep for the Fresno State Invitational next weekend. Making waves for Head Coach Beth Harberts have been senior Olga Descalzi (25 goals, 11 assists) and graduate student Riley Agerbeek (23 goals, 8 assists).

12) UC-San Diego (4-2); La Jolla is the place to be for polo this weekend—or any other, as it’s reputed to be one of the most beautiful places in America. What’s cannot be disputed is that 15 teams—including 12 ranked in this week’s CWPA poll—will travel to Canyonview Aquatic Center for the 2022 Triton Invitational. UCSD opens against rival San Diego State Saturday morning.

13) Long Beach State (3-3); The 49ers will open their slate of Triton Invite matches against the #1 Trojans, a tough assignment. In 38 previous meetings, LBS has never beaten USC. Next match—against #16 UC-Santa Barbara—will be more to Head Coach Shana Welch’s liking.

14) Wagner (10-2); With four wins at Brown last weekend, the Seahawks maintain their position as the East’s top team. But uneasy lies the head that wears the crown; the host Bears took it to their guests. Only three-goal spurt in the third quarter kept Head Coach Ciaran Wolohan’s team from what would have been an awful loss. Wagner will stay number one in the East because their next match is two weeks away at Marist.

15) Pacific (1-4); You have to wonder if the departure of the Kyra Christmas, the Tigers’ phenomenal left who won back-to-back GCC player of the year awards, has had a dampening effect on Pacific’s season. After a lop-sided win last weekend over Cal State East Bay, Head Coach James Graham’s squad will not compete until the Fresno State Invite next weekend. Unlike Santa Claus (if you believe in these things), Christmas is not coming back; after making the Canadian roster for the Tokyo Olympics, she’s on to bigger polo things.

16) UC-Santa Barbara (7-2); The Gauchos are riding a three-game winning streak on their way to La Jolla, where they will open tomorrow against USC. Unlike Long Beach State, UC-Santa Barbara has beaten the Trojans—14 times in 39 meetings. The last win came on 2004; the good news is that Head Coach Serela Kay’s squad gets GCC rival LBS Saturday afternoon in what should be a very competitive match-up. 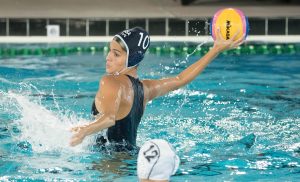 LIU’s Paola Dominguez has been a star pertormer for the Sharks. Photo Courtesy: USAWP

17) Long Island University (4-2); The Sharks traveled to Brown last weekend and came away with two wins, but a bit of luster from their big win over Indiana may have been lost. They opened an early 6-0 lead against the host Bears but by the final quarter that advantage was whittled down to a single goal. Luckily, Paola Dominguez continued her early-season success, delivering a late goal—one of her ten scores over the weekend—to keep the home team at bay. A 14-12 win over St. Francis, PA was a laugher until late, when the Red Flash narrowed a four-goal lead to two. Later today Head Coach Gabby Juarez’s side takes the NJ Turnpike to Princeton for a contest with the #21 Tigers.

18) Indiana (5-3); Head Coach Taylor Dodson’s squad stays put in Bloomington this week before back-to-back weekends of action in California; the Fresno State Invite next Saturday and Sunday then the Kalbus Invite in Irvine a week later.

19) San Diego State (0-2); Like Hawai’i, the Aztecs have had scant competition in the season’s opening weeks. Head Coach Carin Crawford’s side will jump into the deep end of competition with the Triton Invite; first match at 9:50am PST is rival UC-San Diego; when these teams met in La Jolla a year ago it was a sudden-death affair—with the Tritons coming out on top.

20) Loyola Marymount (2-2); The Lions will also look to make up for lost time due to COVID; they and the Aztecs were supposed to have opened the season in Hawai’i–until the coronavirus caused a postponement. Now they will face #10 UC-Davis in La Jolla, with Pomona-Pitzer looming as a likely second opponent.

21) Princeton (4-2); The Tigers host their own tournament this weekend, with a total of 11 teams descending upon DeNunzio pool for three days of action. A notable contest takes place today, as #17 LIU will test their ranking against the home team. Princeton will play a pair of St. Francis squads (Brooklyn and Loretto) and VMI—but not Ivy and CWPA rival Harvard. 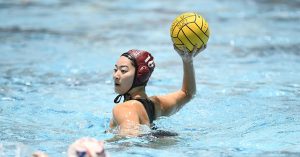 22) Harvard (5-1); The Crimson are off to a fast start, though their only match against a top 20 opponent—Wagner—was an 11-6 defeat where the Seahawks manhandled the Harvard offense. Among the four opponents Head Coach Ted Minnis’ squad will face in the Princeton Invite are the Sharks of LIU, a great test for a young (11 freshmen and sophomores) squad. One first year stands out; Erin Kim netted a hat-trick against Wagner after doing the same against Villanova the week before.

23) Marist (2-4); The Red Foxes picked up a couple of wins last weekend at the Bruno Classic, but struggled in putting away the pesky Red Flash of St. Francis, PA. They are back in California for more top-flight competition, opening against #7 UC-Irvine in the Triton Invite.

24) Bucknell (2-1); A weekend off for the Bison leads into the Princeton Invite and four matches, starting tonight against Princeton. Head Coach John McBride has a chance to get off to a fast start in the CWPA, with matches against conference rivals SFU and host Princeton.

25) Brown (5-5); The Bears had a hectic last weekend, hosting 10 teams / 19 games. The hosts were in six of them and were very competitive, winning four. Their two losses were both by two goals: to #14 Wagner and #17 LIU. This weekend is off for Head Coach Felix Mercado’s team; next weekend it’s off to Santa Clara for four matches.