In a move that immediately impacts the fortunes of collegiate water polo in our country’s largest city, Long Island University (LIU) announced earlier today that Bret Lathrope—who has played for and worked at some of the country’s best collegiate programs—agreed to be the school’s inaugural men’s water polo coach.

A standout for UCLA, where from 2009–2012 he competed on three NCAA qualifiers, Lathrope is well-traveled in polo circles on both coasts as well as in Europe. After graduating, in 2014 he served as an assistant to Head Coach Daniel Leyson at UC-Davis. In 2015, he traveled to Barcelona, Spain for a stint playing professionally for Agrupacio Esportiva Santa Eulalia. He returned stateside in 2016 to be an assistant to John McBride at Bucknell, then in 2017 landed at Massachusetts Institute of Technology as an assistant to Dave Andriole. 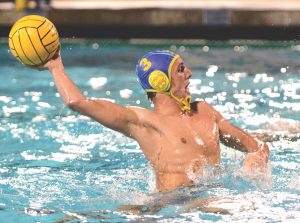 When Andriole unexpectedly quit, Lathrope found himself at age 27 as head coach of a men’s DIII polo program at arguably the most academically accomplished university in America. The 2018 MIT season was a revelation; despite a roster including 12 undergraduates in a group of 17, Lathrope led the Engineers to a respectable 10-13 record, including three wins against Northeast Water Polo Conference foe Iona, one in the NWPC Championships.

Despite this success, Lathrope jumped again, joining Head Coach Adam Wright as an assistant on the Bruins’ men’s coaching staff. UCLA did not qualify for NCAAs in 2019—the first time this happened since 2013. Following a year in Westwood, in 2021 he landed in Long Beach State on Gavin Arroyo’s men’s team staff. At this latest stop, the 49ers enjoyed a 20-6 record and qualified for NCAAs by virtue of a win in the Golden Coast Conference (GCC) championships.

In taking on a new program in New York, Lathrope faces an uphill climb entirely different from challenging burgeoning rocket scientists to be successful in one of the toughest intercollegiate sports. Men’s polo in New York City is not nearly at the level that he experienced as a high school star in Miramonte High School in Northern California or as a player for UCLA.

With the arrival of the Shark men, there are now five programs in the region; Fordham in the Bronx; Iona College in New Rochelle; St. Francis Brooklyn—ten blocks from LIU’s downtown Brooklyn campus—and Wagner College on Staten Island.

Of the four established programs, only Fordham and St. Francis have ever advanced to NCAAs. Fordham features a deep-deep pool, but the other programs in the region compete in shallow-deep facilities of dubious quality, ranging from a four-foot-deep shallow end at Iona to five and a half feet at St. Francis. LIU’s pool, built in 2005, ranges from nine to four feet deep; it’s shallowest end is a challenge for male polo athletes that range in height from 6-2 to 6-6. But it has not been an obstacle so far for LIU’s women’s program, launched in 2019. Sharks Head Coach Gabrielle Juarez has enjoyed success at home, posting 3-0 record last year while a winning the 2021 Metro Atlantic Athletic Conference (MAAC) regular season title in only the program’s second year.

Pool concerns and regularly facing the East’s best program’s are issues Lathrope’s team will need to overcome. No decision has yet been made for where the Sharks will compete, either in the Northeast Water Polo Conference (NWPC), which includes MIT and St. Francis as well as Ivy League members Brown, Harvard, Princeton and DIII Connecticut College, or the Mid-Atlantic Water Polo Conference. The MAWPC includes Bucknell, Fordham, George Washington, Johns Hopkins, Mount St. Mary’s, Navy and Wagner. 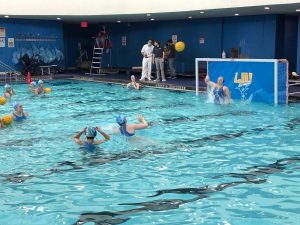 Neither the MAWPC or NWPC—both offering an automatic NCAA berth—offers a clear path to a national championship. The past six years Harvard and Princeton have alternately captured the NWPC title, while Fordham, after never qualifying in 70 years of intercollegiate play, won the MAWPC title last season and a first-ever NCAA berth. Prior to the Rams’ win, Bucknell and George Washington took turns representing the conference in the postseason.

[Fan in the Stands: A Bronx Water Polo Tale]

Despite not being a location for talent—Clyde Huibregtse, who Lathrope coached at MIT, is one of a few New Yorkers to have recently played collegiate polo in the Northeast—the new LIU coach arrives at an auspicious time for NYC polo. Greenwich Aquatics in Connecticut, the top age group program on this coast and one of the country’s best, has begun producing DI-ready athletes, some of whom Lathrope would love to welcome to Brooklyn.

[On The Record with Ulmis Iordache, Greenwich Water Polo Coach]

There is also a glut of high school talent currently throughout the country seeking to match with schools, the result of the COVID-19 pandemic which provided collegiate men and women in all NCAA sports an extra year of eligibility due to play being suspended for much of 2020. Lathrope, with connections in both the East and West—as well as a potential pipeline to European talent—should be able to quickly assemble a team. He’ll need to; first ball drop for LIU men’s polo takes place in September, less than eight months from now.