A new women’s water polo season is set to begin this morning with a ball drop between host UC Santa Barbara and Ottawa University, the kick-off of a slate of 42 matches this weekend at three separate tournaments. The 2022 UCSB Winter Invite will featuring 12 schools in Santa Barbara, the ASU Cross Conference Challenge will showcase five ranked programs competing under the desert sun at Arizona State, while Long Beach State will bring in four other teams for a one-day invite.

As much as it is hoped that the 2022 season will be a return to normalcy, there are signs that the latest collegiate polo season may be dogged by the same problem that disrupted the past two NCAA women’s seasons: COVID-19.

Matches have already been cancelled this season due to coronavirus concerns. Last weekend, Hawai’i, ranked #6 in the CWPA preseason poll, was forced to forgo a slate of six matches between the host Rainbow Wahine, #15 San Diego State and #17 Loyola Marymount. #5 Cal also called off a mid-week match scheduled against Cal State East Bay. 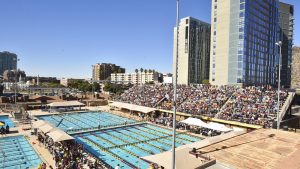 The Beach Invitational announced yesterday that it was moving competition back to Sunday and that California State University at Northrop (CSUN) will not be joining the host 49ers, who will welcome Biola, La Verne, Pomona-Pitzer and Whittier for a slate of matches that begin with #12 LBS facing Pomona-Pitzer.

The Long Beach State announcement makes no mention of COVID-19 concerns, but the virus remains a threat, even for a sport that for the next few weeks will be contested outdoors in chlorinated pools that have proven to prevent transmission of any variant of the coronavirus.

[Hope For a Water Polo Revival Springs Forth from Idaho]

The 2022 UCSB Winter Invite will include #3 UCLA and a number of the nation’s top teams with temperatures expected to average a balmy 66º and sunny over the next three days—ostensibly a polo fan’s ideal opening event. However, no public tickets will be available for any of the matches at UCSB’s two pools.

At the ASU Invite, fans will be allowed into the Mona Plummer Aquatics Center, provided they follow CDC guidelines. ASU has asked that attendees enter the facility masked.

– #21 Cal Baptist vs. #19 Princeton (Friday, 1 p.m. PST). The Tigers took off last season due to COVID; it will be interesting to see what HC Derek Ellingson’s squad looks like as the Ivy League does not allow red shirting.

– UCSB vs. #23 Wagner (Saturday, 11:45 a.m. PST, streamed live here). The Seahawks are another program that has not competed in almost two years, Once the scourge of the East, it will be telling how Wagner fares against the host Gauchos. 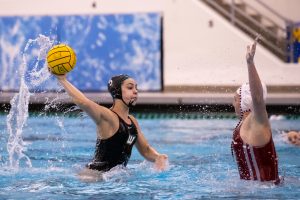 – #11 Indiana vs. Iona (3:45 p.m. EST). The Hoosiers have been given a lofty preseason ranking. Iona is not necessarily a tough opponent for a Big10 program that competes in the MPSF, but the Gaels do return Jordan Van Reeken, their leading player who skipped last year due to COVID concerns.

– #3 UCLA vs. #10 UCSD (2:45 p.m. PST). The mighty Bruins will have already beaten Cal Baptist and Ottawa when they face a Top Ten opponent. A great measuring stick for Triton HC Brad Kreutzkamp.

– #5 Cal vs. #8 Michigan (Friday, 10 a.m. MST). Two top programs which have traded wins over the past three seasons, with the Golden Bears winning two of the last three.

– #4 ASU vs. #y UCI (Friday, 1:30 p.m. MST, streamed live here). MPSF rivals Cal and ASU will not face each other here, so this is the highest-ranked match-up of the weekend.

– Cal vs. #10 Fresno State (Saturday, 3:45 p.m. MST). The Bulldogs have come on strong since last weekend and would like nothing better than a win over a major program like Cal. Two former UCLA greats—FSU HC Natalie Benson and Golden Bears leader Coralie Simmons—lead their squads into the pool.

– #12 LBS vs. Pomona-Pitzer (Sunday, 9 a.m. PST). The 49ers are the region’s local power; the Sage Hens, a perpetual top DIII program, would like nothing better than to upset their hosts.