Fan in the Stands: A Bronx Water Polo Tale

BRONX, NY. Located in the heart of NYC’s most northern borough, the Bronx’s Fordham University, now almost 200 years old, is one of the country’s oldest Catholic institutions of higher learning.

When it comes to intercollegiate athletics, though, it’s been just a decade or so shy of a century since Fordham was nationally relevant. The legendary Green Bay Packer coach Vincent Lombardi was a member of Fordham football’s “Seven Blocks of Granite” offensive line in the 1930s. And―fun fact―the oft-relocated Los Angeles Rams NFL franchise, first based in Cleveland, was named for Fordham’s footballers. In our day, it has been women’s basketball that has garnered media attention, with a trip to the NCAA tournament in 2019.

But, although the men’s water polo program has featured a pair of influential Judges in its history—Francis Judge, as a Ram and with the New York Athletic Club (NYAC), was one of the city’s notable players in the middle of the last century while his son Chris was a standout in the ‘70s—the Fordham men have never previously qualified for an NCAA tournament.

In 1973 Ned Kelly—like the Judges a member of Fordham’s Hall of Fame—led his team into the Eastern College Athletic Conference (ECAC) Championships. The Rams lost to Yale 4-3 and, after Kelly had graduated, again the following year. It would take almost half a century for Fordham to make it back to a championship final, which they achieved last month.

This season promises to be different. On a balmy mid-November evening, I’m in the stands of Fordham’s Col. Francis B. Messmore Aquatic Center following what I believe is a compelling story of the 2021 men’s varsity water polo season. 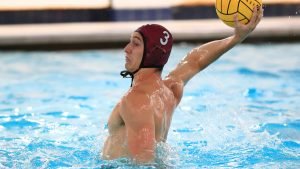 Also watching is Jake Miller-Tolt, Fordham’s all-time leading scorer (351 goals) who graduated last spring. He concluded his collegiate career by being named the 2020 Lombardi Award as Fordham’s top male athlete―but Miller-Tolt was never surrounded by the talent Rams possess now. On this night, he is part of a gaggle of raucous Fordham fans as well as a sprinkling of St. Francis Brooklyn supporters watching as the two teams

That there can be excitement at Fordham for water polo is due largely to the recruiting prowess of Brian Bacharach, the Rams’ head coach. After a five-year stint as an assistant coach and a season as co-head coach with Bill Harris, Bacharach, a Northern Californian who came East for a financial services job, has been the headman at Fordham polo for more than a year.

Until relinquishing head coaching duties to Bacharach in 2020, Harris, an affable former St. Francis Brooklyn and NYAC polo player who, along with his brother Charles, is a member of the USA Water Polo Hall of Fame, had pulled Fordham to respectability over the last decade

“Bacharach and Harris have done an amazing job getting these guys in shape,” Miller-Tolt enthused about the two. “They’re amazing coaches who instilled a great program. These young guys they have are excellent players.”

Relaxing on the pool deck after a match that had no bearing on his team’s NCAA prospects, Bacharach contemplated the mixture of experience and youth that has powered Ram polo to its best season in program history.

“We’ve got these super-experienced seniors and a whole group of newcomers in our rotation,” he said. “It’s a dichotomy in terms of our experience level. . . .The senior group has been very important to our success up to this point. When things have veered, those guys have been the ones to help right our ship—whether it’s talking or making a big play or whatever.” 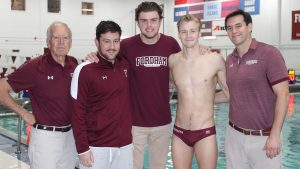 Miller-Tolt, who during his four years (2016-19) saw his team improve every year—but never as much as this season—was not regretful about being on the sidelines with his former teammates on the verge of an NCAA berth. Said Miller-Tolt, “I had some success while here, but none of my success would be possible without them. What they’ve done with this program in a short amount of time is incredible.”

Among the many new faces brought in by Bacharach is Jacopo Parrella. A freshman from Naples, Italy, Parrella represented Italy in a FINA Junior Worlds final on September 5, got on a plane and came to New York City the next day. He was the leading scorer (57 goals, 67 assists, 124 points) this season as the Rams achieved the most wins in program history.

“When Coach Brian called me last year and explained the plan, I knew that it was very good,” Parrella said after the match. “This is just our first year, but we have three more [to develop].

Recounting that coming to America was jarring, Parrella said, “[T]he first weekend I was very scared—the first change is the referees. I have to learn about American water polo, but I like it. I like to play at Fordham; I’m very competitive so it doesn’t matter if I play in Europe or America or other countries. I always play my best.”

In the stands, Michael McElwain holds up a poster touting Parrella. It seems curious because that kind of enthusiasm is so unfamiliar. McElwain, a freshman from Central New Jersey, knows little about his classmate and even less about water polo.

“I really don’t know. I know he won a couple of medals but I’m not really sure in what,” McElwain said when talking about Parrella’s polo experience. He was asked to compare his own experience with the Italian’s task of fitting into a city 4,500 miles away from home.

“Being only an hour and a half away from Fordham, I can’t imagine the adjustment he had to make. That’s why I want to support them in all ways I can.”

Despite limited knowledge of the sport, McElwain understands how a newcomer like Parrella might make Ram polo noteworthy.

“It helps the school community,” he said. “We’re not a huge sports school, but water polo can help build a good reputation for Fordham. [Parrella] bringing his skills here will definitely help the Rams.”

Ending the tyranny of the Terriers

Over the years, the Terriers of St. Francis have tormented the Rams, winning 14 straight until Fordham stopped the streak in 2017—the start of four-straight Fordham victories. With four NCAA appearances this century, including three in a span of four years (2010-13), when it comes to polo success, the Brooklynites lord it over their Bronx cousins. 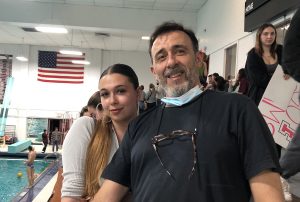 But the previous weekend, Fordham had won their first-ever Mid-Atlantic Water Polo Conference title. Now the two long-time New York City rivals (although St. Francis plays in the Northeastern Water Polo Conference) have at each other in a match whose only meaning was bragging rights among the group of four schools, including Wagner and Iona, that play polo locally.

Marko Gencic, St. Francis class of 2013, is in the stands. As a freshman, he played for the Terriers in 2009, when Fordham last won a regular season title. He remembers that time mostly because St. Francis was on probation and the Rams won the Northern Division title—precursor of the NWCP—by default.

“I don’t remember the scoring sheets, but it wasn’t as close as these recent matches,” Gencic said at halftime, with SFC leading by two goals. “They’re much better! Congrats to Brian, who’s brought a strong team and added a couple of guys from Europe—two, three from Italy and then two from Greece.”

Among the small contingent of St. Francis fans are Lucia Jodra Munoz and her father Jose Maria Munoz who traveled from Barcelona to see Josep Jodra Munoz, a St. Francis freshman. It was Lucia and Jose Maria’s first time in New York City, only possible because of the easing of COVID-19 restrictions earlier that week.

Lucia was ecstatic to see her brother compete in America.

“This is a big opportunity for us because we are on the other side of the world watching my brother, and I’m very proud of him. For me it’s amazing, the best thing ever!”

Her enthusiasm was rewarded. Josep didn’t score, but his defense helped his team to a decisive 13-7 win.

Also appraising the situation from above, though less enthusiastically, was Alex Katsev, whose freshman son Mark plays for Fordham. Saying his son has had a great experience in the Bronx, the Brooklyn native declared that Mark suiting up for the visiting Terriers was never a consideration. 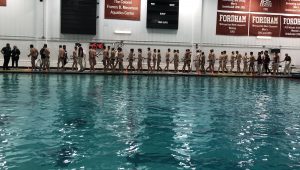 Handshake between Fordham and St. Francis after the match. Photo Courtesy: M. Randazzo

“[Fordham] was his top choice. He was lucky enough to get an invitation to play here,” the senior Katsev said, then lauded all Bacharach has accomplished this year. “The coach has done a great job recruiting, he’s brought in some unbelievable freshmen. Great players, great coaching, they’re a lot of fun to watch.”

Although the home team lost that night, the future for Fordham polo remains bright. Later that month, the Rams would beat Navy 9-6 to win the MAWPC Championship and qualify for their first-ever NCAA tournament.

“These guys are all young. They’re going to get to know each other, and they’ll create a program,” Miller-Tolt said. “The rest of the East has got to be worried about [the Rams]—they’re all freshmen and they’re already amazing talents.”