Editor’s Note: The end is near for the 2021 water polo season. TWp is looking back on the five biggest story lines of the year. Today we focus on the various best of year selections by the ACWPC, FINA, Swimming World, The Olympic Club and TotalWaterPolo (you know, the other one). Tomorrow we’ll consider if/how the sport is growing and what the new year will offer by way of new polo opportunities.

At year’s end, there were a bevy of awards showered on professional, national team and collegiate coaches and athletes. Following is a scorecard of who got what, when where.

On December 17th in Dubai, FINA (Fédération Internationale de Natation) announced its annual award winners for all aquatic sports. Following are the winners for water polo: 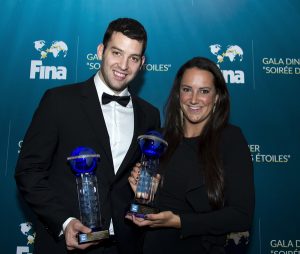 The European TotalWaterPolo (no affiliation with TWp) polled 50+ expert coaches, team captains and media reps and took in 7,600 public votes to pick their top two players:

They also picked whole teams based upon their results; there’s a problem here (IMO) and it was underscored by Coach Savic’s selection of five Serbs for his “team” of best players. Yes, the Serbs are the best team but picking only your own players undermines any legitimacy the selection process might present. It’s not the fault of the European publication’s people but it does raise the question: Is this a serious endeavor or a popularity contest?

Writers did address this by asking Savic why he didn’t pick any of his players in previous polls and now he selected all five. The response: “They all grew up.”

On this front, attention must be paid to Coach Krikorian’s picks. He did NOT select a single one of his own players—and let’s be clear, in a line-up that boasts Musselman, Steffens, Ashleigh Johnson, Rachel Fattal (in my opinion one of the most underrated players in the sport) plus Aria and Makenzie Fischer, Krikorian could easily have filled up his dance card with his own athletes.

After a one-year hiatus due to COVID-19, Swimming World named their male and female players of the year. 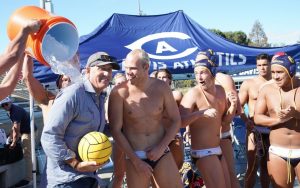 Back in the USA, collegiate performers were cited by several organizations. Most noteworthy was the Association of Collegiate Water Polo Coaches (ACWPC) selections, including coach of the year, player of the year and All-Americans in the DI, DII and DIII levels. No surprise here; Cal, which earlier this month captured an NCAA record 15th men’s water polo title, claimed the biggest ACWPC awards.

As always, the ACWPC posted an extensive list of All-Americans for the DI, DII and DIII men. Here are the links courtesy of the Collegiate Water Polo Association:

The Cutino Awards, presented to the top male and female American collegian were awarded in June by The Olympic Club. Maud Megens of USC was selected as the top female for her performance in the 2021 campaign. She was the eighth Trojan woman thus honored. The male winner, based upon an abbreviated 2020 campaign played in January, February and March was Nicolas Saveljic of UCLA. He is the third Bruin man to be so honored.