Editor’s Note: The end is near! 2021 is almost in the books, so TWp is looking back on the five biggest story lines of the year. Today we focus on the spectator-less 2020 Tokyo Games in and how an aging Serbian men’s team and a dominant U.S. women’s team overcame early obstacles to both repeat as Olympic champs—the Serbs capturing a second consecutive Gold and the Americans copping a record-tying third. Tomorrow we’ll look at all the “best of” awards lavished at year’s end.

That the 2020 Tokyo Olympics came off without nary a COVID outbreak is a medical miracle. Say whatever you like about the suitability of staging the world’s largest (and often most popular) sporting event in a country hostile to its very presence, the Tokyo Games will likely be remembered as a logistical marvel. 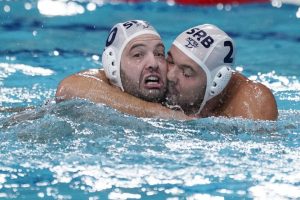 That doesn’t mean that the competition was consistent with standards set by Olympics past. When it came to water polo, the question was: How much did the COVID-19 pandemic impacted the performance of top teams?

Not that it mattered; I’d say all polo fans were happy to see Olympic competition, no matter what.

Croatia—which as the 2012 defending Olympic champs had advanced to the finals of the 2016 Rio Games, only to be topped by arch-rival Serbia—certainly appeared to be affected by Tokyo’s one-year coronavirus delay. Not only was training interrupted during 2020, the Croatians also had to prep for the qualifying tournament in February of 2021. They had unfortunately whiffed at previous opportunities to clinch and Olympic berth. As a result, Ivica Tucak’s squad placed a surprising fifth, his country’s worst finish since 2008. After the Games, FIVE Croatian national team players—Andro Buslje, Xavier Garcia, Maro Jokovic, Luka Loncar and Paulo Obradovic—retired. Predictably, there were calls for Tucak, arguably the most successful national team coach in Croatian history, to follow his former players into retirement.

Italy, a gold-medal favorite coming into Tokyo, had an even worse time. Italian head coach Sandro Campagna’s squad was one of the first to qualify for 2020 by winning the 2019 FINA World Championships in Gwangju, South Korea; only Serbia, as defending Olympic champions, were quicker to make the Tokyo cut.

With a rested—in theory—roster, Campagna’s team was challenged early, with draws against Hungary and Greece in Group A play then drawing Serbia in the quarters. A 10-6 loss sent Italy spiraling into a match against the U.S., which they shockingly lost 7-6. Only a win over Montenegro in the 7-8 match saved the Italians from ending their Olympics on a sour note.

[What the Hell Happened to Italy?!]

Montenegro was also miserable in Tokyo, finishing a program-worst eighth after finishing fourth in their three previous Olympic appearances. But it was the Spanish men’s coach, David Martin Lozano, who apologized to his nation’s fans after a fourth-place finish.

Today we fell and tomorrow we will get up to move on, this is life in elite sport. We have worked hard to win a medal but it could not be. Now it is time to reflect with constructive self-criticism to continue growing. Thank you all for the encouragement @SpainWP

To most observers Spain—runners up to Italy at the 2019 FINA Worlds and to Hungary at the 2020 European Championships—appeared, like the Italians to be a lock for a medal. Having 41-year-old goalie in Daniel Lopez-Pinedo wait an extra year probably was not favorable for Spanish hopes. 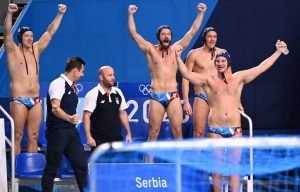 Which is not to detract from the amazing performance of the Serbians—the oldest polo squad at these Games. Having lost stars Slobodan Nikic and Zivko Gocic from the 2016 team and shed their aura of invincibility after an epic semifinal loss to a Sandro Sukno-led Croatian team in the 2017 FINA World Championships, Serbian head coach Dejan Savic sought to conserve energy for Tokyo.

A squad absent some of his top players—such as Filip Filipovic, Branislav Mitrovic and Andrija Prlainovic—finished fifth in 2019 in South Korea. The top Serbians finished fifth at the European Championships in 2020 suggesting that the reigning Olympic champions might be ripe for an upset.

Then came their opening match in Tokyo, a scintillating 13-12 loss to Spain in Group A play. Another loss during group play, to Croatia, seemed to doom Savic’s squad in the quarterfinals, where they would face Italy. But the Serbian coach and his players proved why they are one of the best in Olympic polo history, beating Italy by four, Spain by one in a rematch and Greece by three in the final to capture a second-straight Olympic gold, and positioning Savic and Serbia for a third straight gold three years from now in the 2024 Games.

Who will bet against them?

For the U.S. men, a sixth-place finish—a leap of four spots from 2016—was celebrated as great outcome (which it was, following Rio, the program’s 2nd worst finish.) Leadership at USA Water Polo were encouraged to stay the course, giving USNT head coach Dejan Udovicic a third crack at a medal. It’s challenging to read the tea leaves for an event three years from now—I’ve already opined on this decision—but it’s likely that four members of the current squad, specifically Luca Cupido, Johnny Hooper, Alex Obert and Jesse Smith (who has announced he’s done) will not be part of the next U.S. Olympic effort.

[Is Continuity Best? Krikorian, Udovicic Re-up for Paris in 2024]

Surprise and joy for the American women

If the Serbian march to a second-straight gold was riddled with gut-check challenges, the U.S. women’s path to a record third Olympic title was also fraught—but equally satisfying. Coming into Tokyo, the Americans were overwhelming favorites. In the four years following their finals win over Italy in Rio, Adam Krikorian’s squad lost only three times— all to Australia—against 91 wins. And Never in any major tournament. So, when Hungary shocked the U.S. with a 10-9 win in Group B play—outscoring the Americans 4-1 in the fourth quarter, the first time in Krikorian’s decade of coaching the USNT that his squad had squandered a two-goal lead in the final period.

As we all know, captain Maggie Steffens and her experienced teammates—eight players returned from Rio, with Steffens and Melissa Seidmann returning for a third Games—rallied after their first loss in Olympic play since dropping the 2008 Beijing final to The Netherlands. With a group win over Russia by 13, a quarterfinal win over Canada by 11, a four-goal win in a semifinal rematch with the Russians and an overwhelming 14-5 victory against Spain for Gold.

With that win, the American’s tied the Hungarian men’s teams from earlier in decade who won gold in 2000, 2004 and 2008 and became one of the few teams in Olympic history to enjoy so much success in consecutive Games. Both Steffens and Seidmann joined a select group of three-gold medalists in a team sport—which includes American basketball players Sue Bird and Diana Taurasi (five golds); Teresa Edwards, Tamika Catchings and Sylvia Fowles (four). Both may return in three years for another crack at Olympic glory at the Paris Games (Steffens is already training with CN Sabadell in Barcelona). 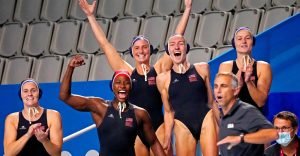 Krikorian has been rehired for another run, and—unlike the U.S. men—American female polo players are lining up for another run. It will again be challenging for one of best Olympic coaches ever to finalize his roster.

All of which is to say: it was a compelling Olympics in 2021, and I can’t wait for another.