USC is Up, Cal is Down, St. Francis on the Rise

After the elation of an unbeaten West Coast trip against ranked opponents, Princeton—which had jumped into a tie for #9 in the country—struggled at home against Harvard in their first NWPC action of 2021, dropping a 10-8 decision to the Crimson.

1) USC (11-0); The Trojans ascended to sole possession of #1 after a scintillating 12-11 win over Cal a week ago in the MPSF Invite finals. They’ll stay there this week due to a decisive win over #6 Pacific—who two years ago beat the Trojans in consecutive matches for the first time in program history. No Vavics sighted on Saturday at Uytengsu Aquatics Center; patriarch Jovan is deep into the Varsity Blues trial in Boston.

2) Cal-Berkeley (14-2); The Golden Bears might have been the nation’s top team this week if not for USC goalie Nic Porter’s exceptional play at MPSFs. They won’t be #1 this week—and will likely drop to # 3 given a stumble against Pepperdine. The Waves got up by 11-6 in the second quarter before a furious Cal rally tied it at 13 late in the third. But Pepperdine was not to be denied at home, taking a much needed 16-14 win in Malibu.

3) UCLA (13-1); After their first loss of the season to Cal a week ago, the Bruins did what they do best: play stifling defense. A San Jose State team riding a three-match win streak comes to Westwood? No problem for Head Coach Adam Wright’s squad. They romped to a 18-8 win. Navy was vanquished for the second time this season, this time by a score of 13-5. In 14 matches, UCLA has given up double-digits in goals three times—once to Cal and twice to UC Santa Barbara

4) Stanford (13-2); After two losses at the MPSF Invite, it appeared as if Head Coach John Vargas’ team was ripe for an upset—especially with a match on the road this weekend against #5 UC-Santa Barbara. Factor in the return of Sawyer Rhodes, the Gauchos’ high-flying lefty in a return against his former teammates, and what you got was a 10-9 Cardinal victory—thanks to Tyler Abramson (three goals, one assist) who replaced Rhodes at the five spot. Rhodes did come through with two goals in a losing effort.

5) UC-Santa Barbara (14-4); Another close loss for Head Coach Wolf Wigo’s squad must be frustrating. The Gauchos have lost by two goals (twice) to UCLA and by one and two to Stanford. Truth be told, the most important games are to come, starting next weekend against Long Beach State, as UCSB looks to break a streak of three decades of futility in qualifying for NCAAs.

6) Pacific (5-7); As has been clear throughout the early part of this season, it’s NOT 2019. The Big Four are a combined 51-5, with almost all of those losses coming from each other. This point was driven home on Saturday to James Graham’s side; mighty USC sprinted out to a 6-2, first quarter lead and the Tigers never caught up, dropping a seven-goal decision.

7) Long Beach State (13-4); The yawning gap between the nation’s top ten and the rest of the thirty-odd NCAA men’s varsity programs is underscored by the 49ers’ win over WWPA member Fresno Pacific. A 36-5 result was by far the biggest ever goal total and difference in LBSU history; the previous high for goals scored was 24 against Occidental two decades ago. It was part of a three-victory weekend for Head Coach Gavin Arroyo’s squad, one that included wins over Redlands 18-2 and Fordham 12-6.

8) UC-Davis (8-5); If the Aggies’ primary goal is to qualify this year for NCAAs—and it should be!—then a sudden death win a week ago Friday over WWPA rival UC San Diego is a great indicator. If Head Coach Daniel Leyson’s hope is that his team can break into the top five; that’s still in the future—but perhaps not so distant. A thrilling contest against UC-Santa Barbara, albeit a 12-11 loss, suggests UC-Davis is narrowing the game with the nation’s top teams. A week-long break allows Leyson’s team to rest up for conference play, which begins this Thursday against Cal Baptist.

These Falcons might be grounded but their water polo team is flying high. Photo Courtesy: Air Force Athletics

9) (T) Princeton University (14-3; 2-1 NWPC); There’s the Sesame Street game: “One of these things is not like the other” and it applies to the Tigers of Princeton. Head Coach Dustin Litvak’s squad has shown it’s not just the best team in the East; it could grow into one of the best in the country. So, being ranked along with the Spartans and the Tritons is both an honor and a warning: don’t sleep on Princeton. The Tigers do have a weakness; they can’t seem to get past Harvard, who beat them on Saturday for a fourth straight time and eighth in the last nine matches. Princeton bounced back with wins over NWPC rivals Iona and MIT, but that loss to the Crimson will sting until the two teams face off again next month.

9) (T) San Jose State (8-10); So far this season Head Coach Bruce Watson’s team has specialized in contests of the nail biting variety—especially when it comes to ranked teams. Not so against UCLA on Saturday; Watson also has to be disappointed that the Spartans could not put down the Lions of Loyola Marymount, dropping an 11-10 decision after leading by three entering the fourth period. One bright spot: a 7-4 win over Navy.

9) (T) UC-San Diego (9-6; 2-1 WWPA); Friday’s match against #20 Air Force in Colorado Springs—a 15-13 win for the Falcons—demonstrated two things: Air Force is for real, and the WWPA is no longer a two-team race. It’s a long season and the Tritons will rise (again) but they won’t face the Falcons again until the WWPA tournament (if at all).

12) Pepperdine (10-7); Given all that’s happened already for the Waves this season, to have predicted a won over Cal last Saturday would have taken the Amazing Kreskin; as it is, Pepperdine almost blew a five goal advantage before hanging on for its biggest win of the season. Beating the Golden Bears was part of a winning weekend which saw Head Coach Terry Schroeder’s team score wins over Pomona-Pitzer and Claremont-Mudd-Scripps.

13) UC-Irvine (7-6); A win over Westcliff, an NAIA school, brought the Anteaters to their total wins from 2019. A loss to Cal—by 17-7—brought Head Coach Marc Hunt’s squad closer to .500 with a match against top-ranked USC next Sunday.

14) Santa Clara (9-5); Wins against three non-California teams—McKendree, Navy and Wagner—at the Gary Troyer Memorial Tournament padded the Broncos record; the only blemish this weekend was a 15-12 loss to Pomona-Pitzer.

15) Harvard (11-2; 2-1 NWPC); It was a bittersweet weekend for the Crimson, who traveled down the coast to start NWPC play. A wire-to-wire 10-8 win over host Princeton was overshadowed by a tough 12-10 loss to St. Francis. Harvard was able to pull out a 18-14 victory at Iona for a winning road trip. But the team’s first loss in NWPC regular season play in three years will change conference dynamics—especially after the Tigers and the Crimson have traded titles the past four seasons.

16) Fordham (14-4, 3-0 MAWPC); Head Coach Brian Bacharach must be feeling good about his squad, especially after a 3-1 California trip which included wins against Cal Lutheran, Westcliff and Whittier. The only slip up: a respectable loss to #7 Long Beach State. The Rams—powered by goalie Bailey O’Mara, strikers Jacopo Parrella and Hans Zdolsek and center Dimitris Koukias—will be back in the Bronx for a conference match Friday against Mount St. Mary’s and a chance to further extend their MAWPC lead.

17) Pomona-Pitzer (11-7; 4-0 SCIAC); The Gary Troyer Tournament was a winning one for the Sagehens. They beat Johns Hopkins, Santa Clara and Wagner, with an expected loss to Pepperdine being the only blemish on their weekend. Taking down a ranked opponent—the #14 Broncos—makes it the third time PP has done that this season. They’ve beaten Loyola Marymount twice as well. 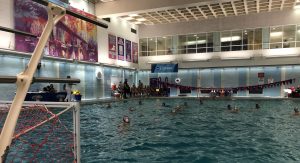 Polo is back at St. Francis, as the Terriers upset Harvard 12-10. Photo Courtesy: M. Randazzo

18) Cal Baptist (9-8; 1-0 WWPA); Nothing like a seven-match win streak to change the tune for a team that has played well all season. With victories over Augustana, Biola, Chapman, Concordia, George Washington, Ottawa and Redlands, Head Coach Kevin Rosa’s team is on a roll at the right time—especially with WWPA rival UC-Davis up this Thursday.

19) Loyola Marymount (4-9); A huge comeback win over San Jose State—where they scored seven of the game’s final eight goals—may have turned the Lions’ season around after a rough start to their season. And just in time; up next Saturday: LMU’s first WWPA match against high-flying Air Force.

20) Air Force (12-2; 2-0 WWPA); The Falcons are in the Top 20 for the first time this season, and will be climbing the rankings this week, thanks to a stunning 15-13 win over UC San Diego. Head Coach Ryan Brown’s rebuild is working perfectly, transforming his team from an also-ran in WWPA play to a contender for an NCAA berth. Sam Fuller (34 goals) and Grant Snyder (48 goals) have done the heavy lifting for the Falcons, who have gotten strong goalie play from A.J. Kuypers (9:48 GAA).


Biola (1-12; 0-4 WWPA) has had a rough start to its inaugural season. The team’s losses have been mostly of the lopsided variety and things haven’t gotten easier; over the weekend the Eagles lost 13-11 to Ottawa and 11-7 to Concordia. It’s on to WWPA play the next three weekends, starting with a home match against Air Force next Saturday.

M.I.T. (3-6; 1-2 NWPC) The Engineers opened NWPC play this weekend in Brooklyn Heights against St. Francis and it was not pretty. An eight goal deficit after the first quarter ballooned to 20 by the end of the third, with M.I.T. ultimately losing 25-7. A trip up the Hutchinson River Parkway to play Iona in New Rochelle went better; the Engineers held on for 13-12 win to even their conference record. Sunday it was back down the coast for a contest against Princeton which resulted in a 15-5 loss. The problem for Head Coach Austin Ringheim is not recruiting top-flight polo players; it’s getting them through the country’s most difficult admissions process.

Navy (6-10; 1-1 MAWPC) has struggled this season, which is surprising because it appeared that Head Coach Luis Nicolao had attracted enough talent to contend for a conference title. Isaac Salinas, now a senior, has done his part, scoring 36 goals. But he’s had little offensive help; the Mids’ second leading scorer is Hayden Kahn with 15 goals; no other player on the squad has registered double-digits. A 1-4 West Coast swing does not look pretty but does not count towards the MAWPC standings. The Mids have a week to regroup before they face conference foes Bucknell and Johns Hopkins on October 16.

[Bucknell vs. St. Francis, Brooklyn: Have You Ever Seen a Scoresheet Like This?]

St. Francis, Brooklyn (9-3; 2-0 NWPC); For anyone concerned about a hangover effect from the bizarre Bucknell vs. SFC match two weeks ago, forget about it. On Saturday the Terriers played their first home game in two years and it was a scoring orgy as they thrashed MIT 25-7. Later in the day Harvard—winners of seven straight in a rivalry that has become one sided of late—came in off a big win at Princeton. With ex-players cheering them on, the Crimson might have expected to have their way as in their past two trips to Brooklyn Heights. Not this time; a dynamic performance from the entire squad—highlighted by deft scoring from Dominick Hevesi and Baptiste Oliveri—produced a gritty 12-10 win for the home team, thrilling the loud contingent of SFC fans. It puts the Terriers at the top of the NWPC standings and guarantees them a Top-20 ranking this week.