2021 MPSF Invite Report: This WILL be a Great Season for Men’s Water Polo

Results are in from this year’s edition of the Mountain Pacific Sports Federation (MPSF) Invitational—the annual early-season get together of the country’s best men’s collegiate water polo teams—and all indications are this will be a fantastic season for the sport. Which, given how the last 18 months have played out, is great news.

At Cal’s Spieker Aquatics Complex yesterday, USC rode a hat trick from Ashworth Molthen and 14 saves by Nic Porter to a 12-11 win over host Cal. The match wasn’t decided until the final minute, when a stout Trojan defensive effort, backstopped by Porter, held off a determined Golden Bear comeback that cut a three-goal margin to one.

The win puts USC at 10-0, while Cal drops to 13-1. Four teams entered Friday’s competition undefeated, but three—Cal, Stanford and UCLA—suffered their first losses of the season over the weekend. On Saturday, Cal tipped #1 UCLA 10-9 in one semifinal while USC knocked Stanford from the unbeaten ranks, dealing the Cardinal, two-time defending MPSF Invite champs, a 15-13 defeat.

In the third place match, UCLA (11-1) rebounded from its first loss of the season to deal Stanford (12-2) a second straight setback by a 10-6 score. It’s the first time John Vargas’ team suffered consecutive losses since the 2017 MPSF Invitational at USC’s Uytengsu Aquatics Center.

Not just the big boys making a splash

But it wasn’t just the nation’s top team that enjoyed a memorable tournament at Spieker. San Jose State—which in 17 matches this season has played nine against teams ranked in the Collegiate Water Polo Association’s Top-20—scored a significant victory over Golden Coast Rival UC San Diego. A 14-13 win on Sunday gave the Spartans a three match winning streak to close out this year’s MPSF, the program’s best-ever performance at this tournament. In the process, Head Coach Bruce Watson’s squad (7-8) beat two GCC rivals in non-conference action; besides the Tritons, the Spartans also beat Pepperdine by 10-9 on Saturday.

[CWPA Top 20 Week Three: The MPSF Invitational is at Cal; Who Can Stop Stanford?]

Pomona-Pitzer was another big winner this weekend in Berkeley. Blow-out losses to host Cal and San Jose State were balanced by a competitive showing in a 13-8 loss to Pepperdine and an impressive 17-16 win over Loyola Maryland. Head Coach Alex Rodriguez’s squad (7-6) got a goal from Jack Mallery with 27 seconds left to down the Lions in a back and forth affair—one in which neither side led by more than two goals. 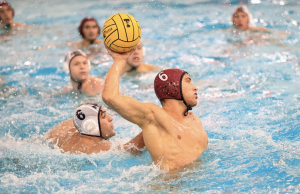 Jacopo Parrella has been a sensation for Fordham. Photo Courtesy: Fordham Athletics

Signs of life outside the West

Princeton fell behind by four goals in the first period on Saturday against visiting Navy before roaring back to take an 11-8 decision at DeNunzio Pool. The Tigers’ weekend only got better as they beat Wagner in the nightcap to take their eighth straight. This streak has been powered by super frosh Roko Pozaric (33 goals) and goalie Billy Motherway (16 saves against Navy; wins over Loyola Marymount, Pepperdine, UC-Irvine and Navy). Next up for Head Coach Dustin Litvak’s squad (12-2) is a home contest against Harvard (9-1), also riding an 8-match win streak after a decisive 14-5 home win against Air Force. Saturday’s match at DeNunzio will open NWPC play for both teams; the Crimson are the reigning NWPC champs; the Tigers took the title in 2018.

The East’s other rising squad is Fordham, which took down another conference opponent on Saturday. A 17-10 win over Mid-Atlantic Water Polo Conference foe Navy puts the Rams at 3-0 in the MAWPC, with wins over Bucknell and Wagner. Head Coach Brian Bacharach’s squad (9-3; 3-0 MAWPC) has been powered by goalie Bailey O’Mara, strikers Jacopo Parrella and Hans Zdolsek and center Dimitris Koukias. Fordham travels this weekend to California for six matches including #6 Long Beach State and Southern California Intercollegiate Athletic Conference (SCIAC) members Cal Lutheran and Whittier.

Where in the world is Marko?

The prospects for a memorable national championship are great, with Eastern squads demonstrating they belong in the mix with many in the West. To expect a monumental upset in NCAAs—in 51 years of championship play no team from the East has ever advanced to an NCAA final—is unrealistic, but certainly more possible this year given the impact of COVID-19 on the sport. A year lost to the pandemic may allow for a leveling of play, one that gives teams like Fordham, Harvard and Princeton a shot at post-season glory. 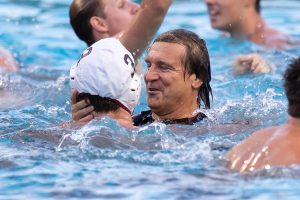 The season may be memorable for those who don’t participate; specifically Marko Vavic and his younger brother Stefan. To lose an Olympian—and one of the best American men in the sport—is a substantial loss for Marko Pintaric’s program. It’s one that clearly will have an impact; absent the one of the Trojan’s top scorers, a team which on paper looks unbeatable will be pushed by its MPSF rivals, as Cal demonstrated yesterday. That, and denying Stefan—who in two years at USC has yet to see any NCAA competition—a chance to play seems patently unfair, no matter his father’s circumstances.

Which suggest that even in a season where the prospects are so bright, there’s patches of gloom in the margins.