A ball drop at 9 a.m. in Harvard’s Blodgett Pool this past Saturday signaled collegiate water polo’s return to the Northeast following interruptions due to COVID-19. For Fordham men’s water polo, which during this period has seen a (mostly) revamped roster and a shifting of leadership, it was worth all the wait. After hammering MIT 16-5 in the morning, the Rams stunned the host Crimson 10-8 in a compelling contest—and one of the signature matches of polo’s reopening across the country.

For Brian Bacharach, the long-time Fordham assistant who this season has been elevated to the top of Ram polo’s coaching chart, the win over Harvard, the East’s top squad the past few years, could not have been a better opening for his first day as sole head coach.

The Northern California born Bacharach—no relation to Burt, though his grandfather Mel was a senior executive at Levi Strauss & Co. as well as major donor to UC Berkeley—followed the family path to Cal, where he captained the 2006 national champions and tallied twice in a 7-6 NCAA final victory over USC.

Finding himself in New York City—like many former water polo collegians—seeking fame and fortune in the city’s real estate market, the consummate West Coast player met Bill Harris, the epitome of East Coast polo. Harris, a standout for St. Francis College as well as the New York Athletic Club, assumed leadership in 2004 of Fordham’s then-flagging polo program. Once the playground of the legendary Judge family, including Francis, a New York City polo pioneer, and his son Chris, one of the region’s most recognizable polo ambassadors, the Rams were on the verge of extinction when Harris stepped in.

[On The Record with Bill Harris, Head Coach for Fordham Men’s Water Polo]

One of the wisest things Harris ever did was to welcome Bacharach, a polo lifer like himself, to Fordham’s Colonel Francis B. Messmore Aquatics Center. Since 2012, the two have collaborated over a Rams’ rebuild, a year-by-year affair that has—seemingly—culminated with the win over Harvard, the program’s first in a decade (12 matches). 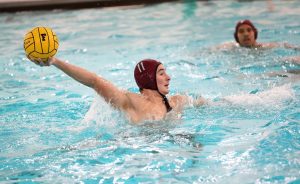 Sebastian Zapatero (2 goals) was one of many contributors to Fordham’s big win over Harvard. Photo Courtesy: Fordham Athletics

Total Waterpolo caught up with the Rams’ head man earlier this week, when Bacharach responded to questions about the unusual power-sharing structure he and Harris maintain, how he ultimately ascended to the top spot on the Fordham polo bench and what to expect from his team after a significant layoff due to COVID-19.

– You’re now leading the Fordham men’s program after almost a decade working with Bill Harris. How will you and Coach Harris continue the improvement that Rams’ polo has enjoyed the past few seasons?

I was actually the Co-Head Coach in 2019 with Coach Harris. When Coach Harris, Dave Roach, the Athletic Director at Fordham at the time, and I spoke about the transition in 2018, it was decided we would share the role in 2019 and I would take over in 2020, which would have been the case had we had a season.

The reality is that the way we structure practices, our schedule, and our different roles as coaches has changed very little since we began this transition many years ago. The only major change that has taken place since 2019 is that I am now responsible for recruiting.

Other than that, most things within the program have continued as usual.

This biggest hurdle for 2021 has been the team needing to get used to embracing change. For example, the Junior World Championships are being held in Prague from late August through Labor Day weekend.

Normally, the championships are held in the middle of the summer, but this changed due to COVID-19. We have Jacopo Parrella, an incoming freshman competing at the championships [for Italy]. He will miss our entire pre-season and first tournament.

We anticipate that Jacopo will help us in our rotation, but no one on the team has ever even met him in person. This is just one example of a change we have to work through once he arrives. I could give about 15 other examples.

After 2020 and all the start and stops we went through, our guys seem to be used to embracing the unknown. Only time will tell whether it has made us stronger as a result.

In the pool, we always have the same goal. We want to win a Mid Atlantic conference championship and win the Eastern NCAA play in game. In addition to that, we want to have a 100% graduation rate with as many of our athletes achieving academic All-American status as possible. However, there are many successful teams that fall short of winning certain games in November. I consider our season in 2019 a success, even though we fell short of our ultimate goal.

Coach Harris and I want to develop young men that become successful members of society after leaving our team. If we are producing that through our program year in and year out, we believe the other aspects such as dollars and fundraising will follow.


Bailey O’Mara was a 1st team all MAWPC selection both in 2018 and 2019 as well as an All American. We hope to have him playing at a high level in the cage again now as a COVID-19 Junior.

Dimitris Koukias was an All-American selection in 2019 at the center position and now returns as a COVID-19 Junior as well.

Hans Zdolsek was a 3-time 1st team All-American in DIII at Whittier College. He is a graduate student at Fordham and we have high hopes for him in his final college season.

Finally, we have a talented group of newcomers and returning players that we expect will contribute immediately. It is unclear who will have an outsized impact at this point, but we are excited to get going to see how things play themselves out.