The condensed universe that is American water polo—and compact it is, with so many coaches, college programs and athletes present and past connected through a shared love for the sport—is just like family. Every memory treasured. Every win celebrated. Every loss lamented.

And like any family, at the passing of one of their own, expressions of grief can be cathartic, a way to make sense of the senseless. In this case the polo universe is grieving the untimely passing of Curtis Robinette, head men’s and women’s coach at Mercyhurst University in Erie, Pennsylvania. Commenters from all over the country have remarked on Robinette’s losing battle to cancer, one many assumed he had won two years ago

Because his calm demeanor became synonymous with Mercyhurst polo, Robinette was thought to be the Lakers only head coach. In fact, the graduate from Slippery Rock College—where he played for the one and only Richard “Doc” Hunkler—picked up the men’s program after a one-season stint by Tim Kuzma in 2001 resulted in a 2-20 record. 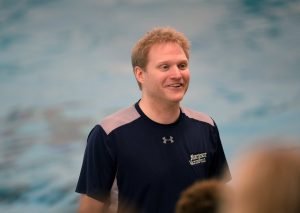 Robinette arrived in 2002 and stayed—through a two seasons stretch of 48 losses and one win. After picking up Mercyhurst’s women’s program in 2003. Through a breakthrough year in 2012 when his Laker men advanced all the way to within one goal of playing for an NCAA tournament berth. Through two decades in Erie, more than 400 combined men’s and women’s wins (209-217 with the men’s team and 204-237-1 with the women). And through a marriage and three children, all of whom he doted on above and beyond an ever-growing extended family of players, coaches and parents.

By the numbers, Robinette and his Laker teams were as good as any in the polo-rich area of Erie, Pennsylvania, home to no less than three collegiate programs. For this, his 20th season, the Lakers coach looked forward to a relatively healthy and drama-free men’s campaign after the disruption and heartache of the past 18 months.

Following are remembrances from those who knew and loved Coach Robinette, a leader of athletes, a father, a son, a husband, a brother. And, a shining example for a sport that values character above all other attributes. Sadly, he leaves behind a wife Molly, two sons, Owen and Finn, and a daughter, Poppy.

As put by Ed Haas, long-time Director of Communications for the Collegiate Water Polo Association (CWPA), “The sport is honestly worse for his loss.”

A celebration of life service for Curtis Robinette will be held at a later date. Arrangements are through Burton Quinn Scott Cremation and Funeral Services in Erie, PA.

To the best game coach I ever met:

I would first like to publicly thank Coach Robinette for the opportunity to live out my college dreams and for giving me a chance to make some lifelong friends. We first met in 2013 when I reached out to him via email expressing interest in his program. I can still remember our first skype call where he described the campus, the team, and what it was like to live in Erie to my parents and me, who knew nothing about the collegiate process or that Erie even existed.

Over my four years, I witnessed Coach Robinette’s resolve when it came to making the most out of any scenario. I have never met a more level-headed/ calculated coach in all my years of international water polo. No matter what the score, he always had a play ready for us to run, which most of the time led to a scoring opportunity. I can still see him rubbing the back of our referees and officials, small talking with them to try and gain whatever favor he could. No matter how bad a season started, he always had a solution and something positive to say. Unlike most coaches, he frequently advocated for the boys to keep in light spirits and to focus on the next game. 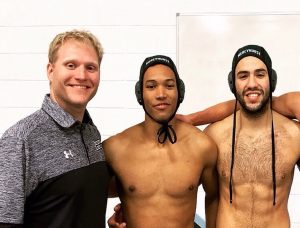 In addition to a prosperous collegiate career, Coach Robinette was responsible for me receiving an assistant coaching job at a rival university. His recommendation is what convinced the head coach to hire me. Over the next year a half I had the pleasure of getting to know Coach Robinette not only as a player but also as a coaching colleague, competing against each other for many weekends out of the year. He was an exemplary man who put his wife and kids above all else.

My heart goes out to the Robinette family and the Mercyhurst water polo community. The world lost a great coach and even better person.

I would not be where I am today if it wasn’t for Curtis—I found my passion for coaching on the Mercyhurst pool deck and will be forever grateful for the opportunity Curtis gave me! He loved nothing more than his family and always made them a priority despite the time demands of being a coach- a great lesson to learn. His smile, infamous fist pump and love for life will be missed, but his legacy lives on.

One way or another I’ve seen pretty much Curtis’ whole career. My father coached against him, so I got to see that on the bench doing stats when he started at Mercyhurst.

We spoke when I was looking for college about me attending Mercyhurst but I ended up at Gannon. Once I graduated I took over the Salem program so I coached against him, too.

I’ve seen him across the pool his whole career.

I’ve always looked to Curtis as a benchmark, someone whose success to strive for. We were both coaching at DII schools and in the same region, so there’s a lot of similarities. 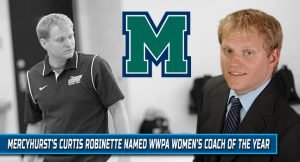 Robinette was 2016 Western Water Polo Association Coach of the Year

There was a lot of competitiveness between our two programs—not so much at first, but as my career progressed our games were back-and-forth competitive… I don’t know how many overtime games.

[In 2012] he set the trend that DIIs could actually compete at the DI level—and nobody’s done it since.

When things were really tense—and it seemed we were always in tight games—Curtis always found a way to lighten the mood. He’d make a comment—I don’t wear shoes on the pool deck so he’d make a comment: “Rob, put some shoes on! You’re creeping me out.”

I’m a father so I understand. I couldn’t imagine not being there to see my kids grow up. You’re a life coach for them. All his players past and present that he was in contact with, I feel for them but I feel even more for his family and his kids.

Curtis was a great competitor and a great coach. We always had a great friendship. We both played for Coach Hunkler at Slippery Rock and had the same love for the sport. He did some great things for Mercyhurst and the water polo community. He will be missed by many. My condolences to his family.

Having the chance to compete against Curtis for seven years, I was struck by he’s genuineness both as a coach and a person. He always made time to talk after any games we played, even against other teams, to provide advice or just let me vent.

A truly caring person who seemed to support everyone at the pool. After having the opportunity to get to know him a bit through coaching and camps it was apparent how much he loved the sport and how he wanted to see growth and success for anyone involved.

Curtis was one of my favorites in the coaching ranks – if we are allowed to have favorites.

He was the most upbeat coach about everything – maybe he won, maybe he didn’t. But he kept it all in perspective. His athletes graduated, they got jobs, they had fun, they won and at the end of the day he went home to his family. The sport is honestly worse for his loss.