Prior to the 2016 Olympics in Rio, in what became a notable moment for a sport not particularly known for being notable, U.S. men’s water polo coach Dejan Udovicic made a bold prediction to ESPN: “I am guaranteeing it,” Udovicic said. “Gold medal in 2020.”

He was half right.

For the third straight Olympics, the U.S. women’s team captured a title, this time with a dominating 14-5 win over Spain. The U.S. men did not fare nearly so well, losing the fifth place match to Croatia by a score of 14-11. This put the American men ahead of their dismal Rio finish, where they placed 10th behind host Brazil—in the Olympics for the first time since 1984—and slightly better than Japan, like Brazil an Olympic participant after a 32-year absence.

Because his team did improve from 2016—advancing to the quarterfinals—and appears to have a roster stocked with promising young players, Udovicic may not have to personally answer for his wild miscalculation. At best his team marginally improved at the sport’s most important competition, and by some measures may have regressed, especially as the team’s coach the past 8 years will almost certainly move on to another job.

This is not what was expected when Udovicic—formerly the Serbian national team coach and winner of Olympic bronzes back-to-back in 2008 and 2012—took responsibility for an aging American roster in May, 2013.

The cultural differences between the two countries is obvious and becomes more so when talking about water polo. One could argue that the American women—who have dominated the sport the past decade—are as dedicated and talented as any in the world. But there’s no questioning the drive—and corresponding success—of the Serbian men’s team, which collected a second-straight Olympic gold last week at the Tokyo Tatsumi International Swimming Center.

Or, the continuity. The Serb team that beat Greece 13-10 in Tokyo returned ten players from the squad that won 11-7 over Croatia in 2016.

Udovicic, acknowledged as the architect of this generation of successful Serbians, did not have anywhere near the same continuity in America. On the U.S. men’s roster for the 2013 FINA World League Super Final, only two players—Alex Bowen and Alex Obert—were on this year’s Olympic squad. 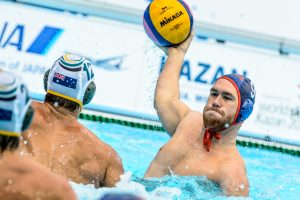 For a coach coming on to the American scene in 2013, a major rebuild was essential, And rebuild Udovicic did. On his 2020 Tokyo roster there was only one player from the London Games: Jesse Smith, who at 38 just competed in his fifth Olympics, tying him with Tony Azevedo for most by an American polo player.

Udovicic likely assumed that he could pluck the best players from a deep pool of American high schoolers and collegians in polo-rich California. This turned out to be wrong—but it’s not surprising given the reverence he and his countrymen have for the sport.

In a transitional year that their coach believed would lay the foundation for a medal run in four years, the American squad in Rio was a mix of old and new, Key to the 2016 roster were a bevy of first-time Olympians: McQuin Baron, Brett Bonanni, Bowen, Thomas Dunstan, Luca Cupido, Ben Hallock, Obert and Alex Roelse. Despite the dismal result—the Americans’ worst at an Olympics since an 11th place finish in 1948—it was possible to believe that better days were ahead for a squad that as recently as 2008 had advance to a gold medal match, a 14-10 loss to Hungary.

Bonanni was the first to leave. Citing a desire to start his career with his father’s real estate development company, the Stanford grad who topped Azevedo’s all-time goal-scoring mark with the Cardinal never played another match for the national team after 2016.

[On The Record with Bret Bonanni: The Olympian Who Got Away]

In an interview with Steve Carrera for his “Off the Deck” podcast, Chris Segesman, Bonanni’s coach at Mater Dei High School and a former USNT member, suggested that his prized pupil simply didn’t want to play for Udovicic.

Dunston, a controversial choice in 2016 as the squad’s only lefty, stayed with the program through summer of 2017. When he didn’t return for his junior year at USC, the 6-4 attacker—the first player from the East Coast to crack the men’s Olympic roster since Wolf Wigo in 2004—disappeared from polo.

The most impactful personnel loses came after a tournament in Berlin the following year. The 2018 FINA Water Polo World Cup saw the Americans place sixth of eight teams—a showing that included a shellacking by Serbia in group play, where Dusan Mandic scorched Baron for five scores.

The goalie who Udovicic had touted as being one of the world’s best young talents simply could not handle top European sharpshooters. By year’s end, he too was gone, as was his good friend Roelse. A one-time Bruin who at 6-8 was the biggest American on any roster, Roelse joined his former USC opponent in opting out of the national team. The absence of a high quality defender with the size and skill to compete against top European sets was significant for a coach devoted to the Yugoslavian style of play, with its focus on a dominant center.

McQuin Baron with the U.S. National Team in 2018. Photo: FINA

The loss of Baron, who never won a title with the Trojan despite four trips to the NCAA final, turned out to be less important than Roelse’s departure. Forced to keep an aging Jesse Smith on his roster—perhaps for promotional reasons—the team lacked a shut-down center defender. Their losses at the 2020 Olympics—by a goal to Italy, three to Hungary, nine to Greece, four to Spain and three to Croatia—were not necessarily due to Smith’s decreased ability. The Americans had neither the experience nor depth to compete with top European squads—the very thing that it was assumed that Udovicic was capable of preparing his team for. But, with Smith’s imminent retirement from the national team, there’s no clear replacement. One might wonder if it makes sense to give Roelse a call for the 2024 Games in Paris.

Collectively, the U.S. men’s departures changed the outcome for Udovicic. Continuously shedding talented and experienced players is a formula for Olympic failure—and one that women’s coach Adam Krikorian, with eight returning Olympians for Tokyo, has deftly avoided.

[Wanna Know Why US Women’s Water Polo is So Good? Look at Stephania Haralabidis]

Whatever criticisms might be hurled at the soon to be former U.S. coach—barring an unexpected change of heart by the USA Water Polo board—Udovicic brought a structured approach to developing players, something lacking for a program that by 2012 had become over-reliant on aging players. So much so that there’s speculation that a generation of talented American youngsters was skipped over by USNT Head Coach Terry Schroeder in futile pursuit of a medal at the London Games.

Perhaps only time will tell

Udovicic’s true legacy will likely be determined by the next U.S. coach. Will Hannes Daube, arguably the best young talent America has produced since Azevedo, stick with the national team and find his way to Europe for more seasoning? Will Hallock, with as much potential for success in the pivot as any American since Ryan Bailey, continue his promising career? Will Drew Holland, who emerged this summer as the top American goalie, come back for another Olympics in three years? What about Alex Wolf, who lost his starting job to Holland last month?

There’s the development of Johnny Hooper, Max Irving, Marko Vavic and Dylan Woodhead—all first time Olympians like Daube, Holland and Wolf—and the promise of Cupido, as yet unfulfilled. Udovicic, with his strong connections in Europe, over the past year was able to connect 12 of his 2020 Olympians with professional teams in Europe. This effort—essential to any young polo player’s long-term success—will also impact this most recent cycle played out for the U.S..

For the loquacious and personable Serbian, who I believe truly loved American culture but simply didn’t understand the particular blend of affluence and entitlement that defines the sport in the U.S., particularly on the West Coast, it’s hard to blame him for unbounded optimism.

Or for initially being tone-deaf to his roster’s limitations. That Ben Stevenson, the quintessential “grinder,” made the Olympic roster despite only three previous appearances for the national team, suggests that Udovicic finally found what he was looking for: a lunch-pail, do-anything athlete committed to what it takes to succeed.

That it took eight years for him to uncover the perfect American can be criticized; that Udovicic believed in his own ability and the outsized potential of polo players in this country should not.

Whomever comes in next should be grateful for what Udovicic accomplished—and look to the example of Stevenson as they continue what is now a multi-cycle rebuild.