Wanna Know Why US Women’s Water Polo is So Good? Look at Stephania Haralabidis

When the Olympic women’s water polo tournament opens later today at the Tokyo Tatsumi International Swimming Center, all eyes will be on Team USA and their quest for glory In the modern era, only the dominant Hungarian men’s squads earlier this century—coached by Dénes Kemény and captained by the great Tibor Benedek—have captured three consecutive gold medals.

The Americans, coached by Adam Krikorian and captained by the spectacular Maggie Steffens, hope to equal this feat. With gold medal wins in 2012 and 2016, a victory in the final at the Tokyo Tatsumi International Swimming Center would represent one of the greatest achievements in U.S. Olympic history. And, with eight returners from the 2016 Rio gold-medal squad, Krikorian’s squad is well equipped to defend their title and achieve Olympic immortality.

Those Hungarian teams from 2000, 2004, 2008 had a sense of shared purpose—instilled by their coach—which made them unbeatable when it counted most. However, there was also a calculated ruthlessness that Kemény utilized; if a player got too old or content to rest on past accomplishments, they would be sacked.

Krikorian is every bit as calculating a coach as his Hungarian counterpart, with a critical distinction; he doesn’t have to threaten his core group of athletes—which besides Steffens includes goalie Ashleigh Johnson, attackers Rachel Fattal, Mackenzie Fischer, Maddie Musselman, set Aria Fischer and all-purpose defender Melissa Seidemann. To push his players to be at their best he can pick from an extraordinarily deep talent pool in the U.S.

And, if that doesn’t work, the Americans can cull from anywhere else in the world because, who doesn’t want to win a gold medal?

Such is the case of Stephania Haralabidis, a Greek-American who decided to roll the dice and play for the USA.

In a recent conversation with Total Waterpolo’s James Smith, the left-handed striker—who in 2016 won a Cutino Award as the best collegiate women’s player while leading USC to a national championship—spoke about the decision to forsake her native country for a shot of Olympic glory with the Americans.

“In 2017 I contacted Adam and asked if I could train with the [American] team,” Haralabidis said. “He said there were no guarantees—even though I had a spot on the Greek national team. I was a starter and wasn’t worried about my position.”

Wanting to play for world’s top team was one thing; fitting in was another.

“I came into a brand-new team, absolutely no idea of what position I would have, I didn’t have any friends—I came in as the foreigner even though I’m part American,” she said. “It was a hard process but I don’t regret it. I’m proud to be an American.” 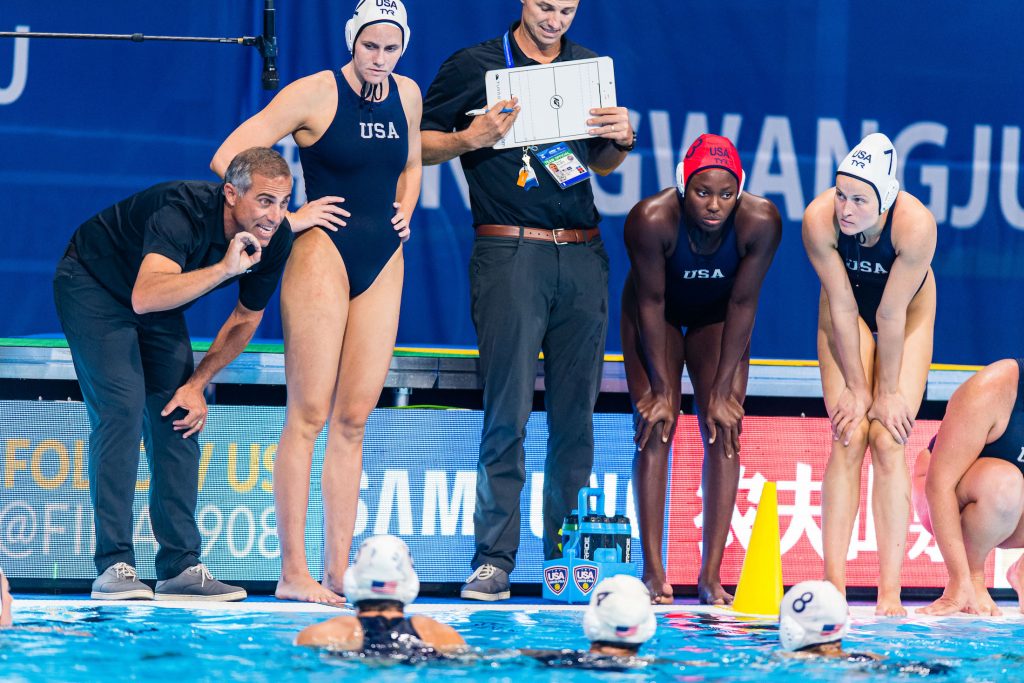 As one of the world’s top young players, Haralabidis would likely be the best lefty on any of the other squads in the Olympic draw. As one of the American squad’s newcomers, she joins other first-timers, including 21-year-old Paige Hauschild, with the physical tools to dominate at any level, Alys Williams and Jamie Neushul—two of the final cuts from the 2016 squad who found their way into the roster five years later. Backing up Johnson is Amanda Longan a new Olympian who may not see much action in these games but is a long-term prospect for the U.S.

But it’s Haralabidis who is perhaps the most intriguing addition to Krikorian’s roster. Since the return to play following the COVID-19 suspension, she has been dynamite on offense, registering multiple goals in a number of matches. She also hit on 60% of her shots—good for 13 goals—at the recent FINA World League Super Final tournament in Athens, which the Americans won (of course). It was their seventh-straight Super Final championship and the squad’s 13th consecutive major title.

Even with this success, Haralabidis was not a lock for the 2020 Olympics until USA Water Polo announced the Olympic roster last month.

In Krikorian’s system you don’t get in the water unless you play defense; the Greek striker is also a superb defender and will be tasked with shutting down her opponent’s top scoring threats. If she does, Haralabidis will  continue to play. If not, well… on a roster as strong as the USA’s, the biggest challenge in these Games may be for everyone to get enough minutes.

Haralabidis has no problem with that, or the pressure of facing everyone’s best game.

“Every single team out there is going to play their best when they face us.” Haralabidis said. “We always have to be at our best which is a lot of pressure… but Adam prepares us every single day for this.”

If by some miracle the U.S. doesn’t win this year, their Greek-American striker has many options to continue playing. Anywhere in Europe would be a landing place for the talented Haralabidis, and there’s no question that one of the top teams in the Greek professional leagues would love to have her back [ed. Haralabidis will join her sister, Ioanna, and USA teammate Ashleigh Johnson playing for Ethnikos next season] . This year she competed with NC Vouliagmeni, beautifully situated on Greece’s Saronic Gulf.

For the moment, however, she’s enjoying her Olympic moment.

“Thank gosh the Olympics are going to happen, my dream is gonna come true!” she told Smith. “Let’s play! Let’s prove our worth.”