Reputed to be the toughest sport around, when combined with the rigors of Navy SEAL training, what might the toughest water polo summer camp be called?

How about: Navy SEAL Water Polo Camp—starting today at the U.S. Naval Academy. 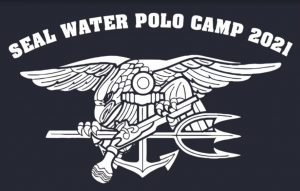 The brainchild of Luis Nicolao, USNA class of 1992 and head coach for the Academy’s men’s water polo team 50 high school athletes will experience four days of intense training directed by Coach Nicolao, his staff and as many as eight active Navy SEALs.

Nicolao, who also coached men’s and women’s polo for two decades at Princeton, acknowledged that the SEALs’ popularity made a camp of this sort inevitable.

“The SEAL community has done a good job of promoting and marketing itself,” he said in a recent phone conversation, adding that social media and movies had created a great deal of interest in all things SEAL. “We took that to the next level. From 8 in the morning until noon I’m putting kids through a mini SEAL training and give them exposure to what the community’s about. In the afternoon and evening we’re going to play water polo.”

Training as a SEAL—it stands for Sea, Air, and Land—is a highly selective, years-long process that only the very few qualify for. Typically, candidates spend more than a year in formal training before being receiving the designation of Naval Special Warfare (SEAL) Officer—and only a fraction of those who enter emerge with the coveted trident pin signifying membership in one of the world’s elite combat forces. 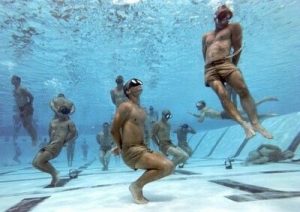 That process begins when select USNA juniors participate in a “two-day screener” where 150 trainees get their “asses kicked for 48 hours” by active duty SEALs. Only 60 make it to the next level—a two-week camp before graduation that winnows candidates down to a final 30.

These fortunate few are ticketed for 24 weeks of Basic Underwater Demolition/SEAL (BUD/S) training and a 26 week SEAL Qualification training before being assigned to one of 13 different platoons for deployment.

SEALS and polo do go together

The new camp’s tag line says it all: “NO REFUNDS GIVEN FOR A LACK OF MOTIVATION.” It’s a Navy thing; only the toughest endure, with no quarter given to slackers.

Given the rigorous training required to succeed at polo, aspiring to be a SEAL makes sense. SEALs are renowned for their skill in high-risk, high reward missions, including killing Osama Bin Laden during a daring raid into Pakistan in 2011.

Which makes for a natural fit with the Academy’s polo program.

“Water polo. attracts, gifted, athletic people,” Nicolao said. “That’s a big reason why we’ve been successful and why we have the sport. We have a history of Navy SEALs in our program; we have two trying to [qualify] now and four juniors and a couple of freshmen all in that pipeline.”

The Navy is attuned to the return from promoting their most marketable troops. Camps connected to the SEALs—including SEAL Elite and SEAL Ultra camps offered in the past by Navy Wrestling, provide excellent opportunities to extend recognition of the USNA and boost recruiting.

If you’re able to make it through the Academy and SEALS you’re set for life. Nicolao said of David Silverman, a SEAL who reached the rank of Lieutenant Commander before retiring in 2011, that “he’s dominating out in the real world.”

In a recent interview about Larry Rogers, his high school polo coach at Bellarmine Prep in San Jose, California, Silverman—part of a consulting group headed by Stanley McChrystal, a retired four-star general—spoke about the overlaps between polo and SEAL training. 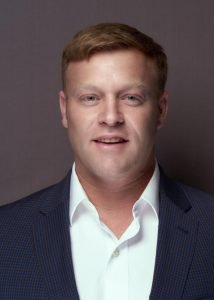 “As a member of a SEAL Team, or any high-performing team, there are a couple of things you must consistently do well,” Silverman said. “First, you must master the fundamentals. When you get into high stress situations, you don’t want to be thinking about basic tasks. You need to make the things that are routine, routine. Commit the fundamentals to muscle memory, so they happen without thought.”

Describing this as similar to training for water polo under Rogers and Mike Schofield, former Navy polo coach, Silverman emphasized the importance of lightning quick decisions—both in combat and in the pool.

[Bellarmine’s Larry Rogers: “He asked a lot but gave much more”]

“[Y]ou drilled endless hours on shoot, move and communicate, so when you got to a target, where chaos is king, you were able to assess, reorient and make decisions faster than the enemy. Those milliseconds were the difference between life and death…”

Nicolao appreciated this perspective—he also trained under Rogers at Bellarmine—but emphasized that his camp is not about life and death. Rather, it’s meant to inspire a new generation of athletes to pursue polo and consider what it takes to be a SEAL.

“We’re not gonna make any kid day two quit—It’s all about fun, it’s all about experience, it’s something different,” he said. “The SEAL guys want these kids to go home and say: ‘I want to be a Navy SEAL!’”

And, if some of them decide that Navy water polo is the best avenue for these essential military combatants, that’s just fine with Nicolao.