Bellarmine’s Larry Rogers: “He asked a lot but gave much more”

It’s said that a man’s worth is measured not by his bank account but by his friendships. In the case of Larry Rogers, longtime swimming and water polo coach at Bellarmine College Preparatory, who unexpectedly passed away in April, the worth was large indeed. Rogers’ legacy embraces hundreds of swimmers and polo players he coached at the Jesuit all-male prep school in San Jose, California, as well as at Monta Vista High School in Sunnyvale.

Of the legions of former athletes who played for him during a 36-year (1981–2017) career at Bellarmine stunned by his sudden death at 74, a core of those who knew him best attested to the qualities that made Coach Rogers such a feared—and beloved—presence on the Bells’ pool deck.

“After my father, he was the most impactful man in my life,” said David Silverman, a 1994 Bellarmine graduate who went on to the U.S. Naval Academy and served as a Navy SEAL for a decade. ”Probably more than anyone, he made me who I am today.”

Will Quist, who swam and played for Rogers from 1995 – 1999, agreed that his former coach demanded—and got—the best out of his players, many of whom consider themselves his sons.

“I know it’s cliche to say ‘sports prepares you for life’ but I believe that was sacred to Larry,” Quist wrote in an email. “He was trying to teach us all how to consistently get the best out of what we had, no matter what we did in life [or] where we went. And he never expected more from you than you could produce.” 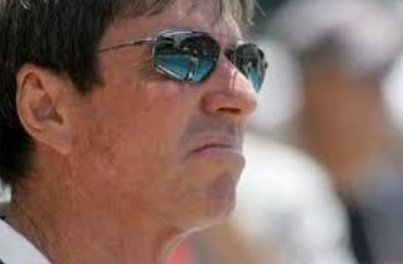 Larry Rogers in an undated photograph

According to Greg Schaffer, coached by Rogers from 1985–89, news of his former coach’s passing evoked great sadness—”sadness for his wife and kids. Sadness for the Bellarmine community, and in particular that he and alumni would not be able to place him in the Bellarmine Hall of Fame while he was still with us.”

“Larry will not be there to add to stories, we will not hear his voice and laugh cut through the room,” Schaffer added. “I know that day would have been among the most special in his life … and ours.”

Bellarmine being a Jesuit institution, an often-heard sentiment is “For and with others.” The phrase, which lies at the heart of the Jesuit spiritual and educational traditions, was first articulated by the head of the Jesuit order, Father Pedro Arrupe, at a high school address in 1973,  as “Men for others.” It has expanded in succeeding years to be cited as “Men and women for others and with others.”

Despite—or perhaps because of—his methods, Larry Rogers came to vividly exemplify this Jesuit way of preparing young men for a higher purpose. He was zealously committed to excellence—and emphasized that commitment in the saltiest of language.

“Another way of saying ‘With and for others,’” said the Rev. Edward Reese, who in 1981 hired Rogers for Bellarmine, “is that God can be found in all things. [W]e would translate that to: If you’re going to do something, do it well.”

And “do it well” is what Rogers’ swim and water polo teams did. His teams achieved unparalleled success: fifty-nine CCS (Central Coast Section) titles over four decades of coaching, including 34 in swimming—and 31 straight from 1985–2015—as well as 25 water polo titles. Two of those polo championships came during his time at Monte Vista; the majority of Rogers’ success was leading the Bells of Bellarmine.

But his legacy is not only about winning—records are forgotten as another coach or program enjoys outsized success, and the moment shifts. Coach Rogers’ lasting accomplishment is the impact he had on the young players who came through his swim and polo programs—and how his influence at a critical point in their lives made them the men they are today.

“Old school, tough love, that was Larry,” said Jerry Mix, who in 1974 was the first All-American in water polo at Monta Vista, the school where Rogers notched his first-ever CCS championship. “The truth is, he never changed. The sport changed; in the late 70s, the sport was brutal. It was a different game. Larry taught kids to be tough. That was it.” 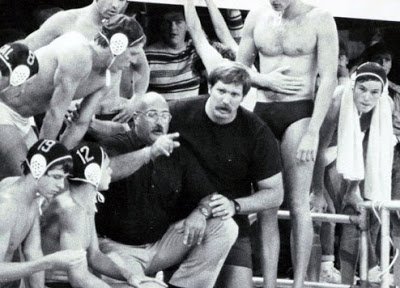 Rogers was known for admiring Bobby Knight, the Indiana University taskmaster who won three NCAA men’s basketball championships, including the last unbeaten team to win a title (1976). But Rogers was closer in substance to Pete Cutino, the legendary Cal water polo coach. Father Reese, who in the late ‘70s took recreational swims in the Bears’ aquatics facility, got to see the notoriously tough Cutino at work.

“I used to swim in one end of the pool and watch [Cutino’s] practices,” Reese said. “[Coach Rogers had] the same approach. It’s no different than what they used to tell us as young teachers: Don’t smile ‘till Christmas.”

“It took a while; there were kids with tears in their eyes at first, but they found out he cared for them,” Reese said of Rogers’ Bellarmine athletes. “He was very demanding. But there wasn’t anything he asked of them that as a coach he wouldn’t do himself. And, it was proven; they just loved him.”

Luis Nicolao, now the head men’s water polo coach for the U.S. Naval Academy, is among the large contingent of former Bellarmine players mourning Rogers’ passing. According to Nicolao, Rogers’ approach was not only a “sign of the times” but represented the iron discipline the Jesuits are known for.

Said Nicolao, “Nineteen eighty-four was a different world. My teachers were tough priests and held you accountable. One of my favorite teachers of all-time … would call you a buffoon. Today, if anyone called a kid a buffoon in class, you would get fired. So Larry could get away with stuff. It made us stronger—it just did. It gave us thicker skin.”

Silverman, the Annapolis graduate and Navy SEAL, attributed his later success to lessons learned in the Bellarmine pool.

“Larry believed that if you created enough mental and physical pressure, and stress on someone—to the point of almost breaking—then they would come out a much tougher, more capable individual able to deal with any competition or life challenge,” Silverman explained. “He set a very high standard in practice and held everybody—regardless of talent—to that standard. This made us incredibly resilient and tough as a team.” 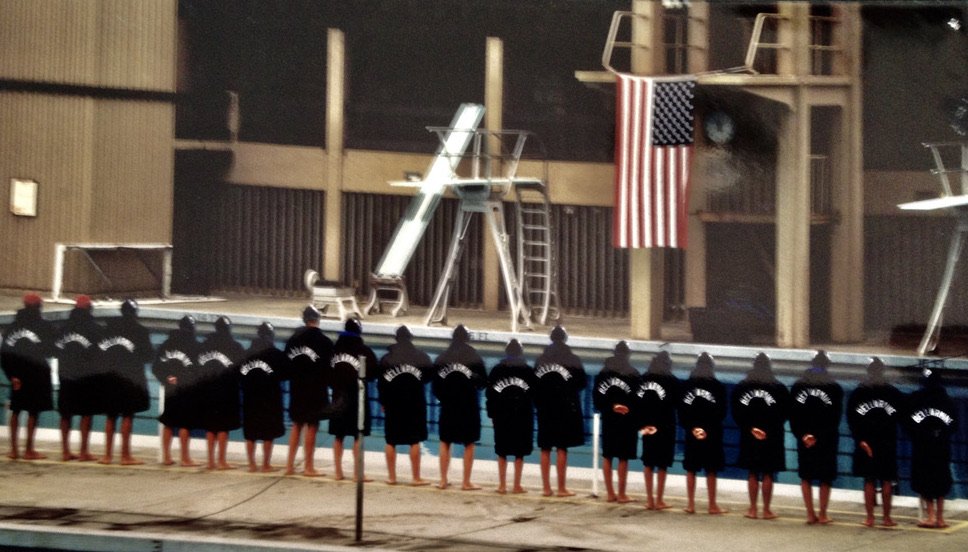 Obi Greenman, a member of the 1983 CCS champions—Rogers’ first at Bellarmine—said that the morning still belongs to Rogers.

“Thirty-five years later, early mornings still remind me of Larry,” he said. “ [N]o one other than my parents was ever in my camp as much as Larry was. “As I said in the days after Larry’s death to the brotherhood that is all of his former athletes, Larry asked a lot, but gave much more.”

“He had high expectations and nothing else,” said Greg Davies, who played at Bellarmine from 1989–93. “There were no excuses; it was, show up, be on time, give your best. Even if you weren’t the strongest or the fastest kid, if he saw potential, he would ride you.”

Not just about polo, these were lessons for life

Quist, whose father Bob also grew close to Rogers, explained that his coach was nothing if not direct.

“Larry was hard on us. He demanded a lot, and not only didn’t he mince words, he would choose words that were meant to get to you,” he said. “I think people use the term ‘tough love’ because that is what it was. While you were in it, it felt mostly like ‘tough,’ but most seniors began to understand the love behind it, and for the rest of your life that’s what you felt.”

Lawrence Snapp has gone on to be a chief decision-maker in Silicon Valley information technology. He recalled how Rogers viewed the Bellarmine experience. “Larry said often that we attended a ‘college preparatory’ school and so that was his job…to prepare us for college,” Snapp wrote in an email. “The truth is he was preparing us for life. This stuff seemed to matter much more than any score or victory.”

Rogers was focused on success, but he knew when to drop the iron rod.

“[He] was never soft—he was the opposite of that,” said Snapp. “But he was committed to each athlete realizing their potential.”

Snapp continued: “Larry was also the mellowest bad joker in the hallway during school that you ever met. He was so mellow and relaxed during class time. Seeing him so human outside the pool helped me rationalize and digest some of the tough love in the pool.”

Snapp was not expecting to go to a top West Coast polo program, but Rogers lobbied USC coach John Williams to take the young man, who as a Bellarmine senior in 1989 was part of both a CCS polo title-winner and a national swim champion. He was at USC when Jovan Vavic joined as a Trojan assistant in 1991. Snapp says that life with Rogers prepared him well for the rigorous Montenegrin. 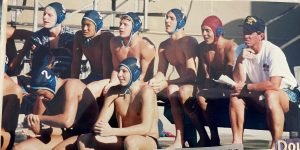 “It was awesome because I didn’t fear for a second,” Snapp said. “There were guys on our team that were 6-8 and I was barely 6-feet. I was able to compete, I was probably able to work harder than anyone else on my team.”

Davies got perhaps an even bigger life boost from his coach. He was considering the West Coast for college, but Rogers called Ed Reed of Brown University in Providence, RI and told him to take the San Jose native. The result was a stellar career as a Bear that concluded with a captaincy in Davies’ final year.

That call provided Davies, who, like all of the players I spoke with, said their lives were profoundly influenced by their former coach, with the opportunity to get a spot at one of the most prestigious universities in the country.

That and, of course, hard work.

“There was this cultural expectation, and it wasn’t just from Larry, but from the older players when you were coming,” Davies said. “You give your everything. You support your teammates, and you constantly improve.”

Yes, it was a different era

A critical question came up time and again in discussing Rogers’ passing: how would he fare in a time when his methods and manner might likely be considered “inappropriate” and “old school” has implications to be frowned upon? 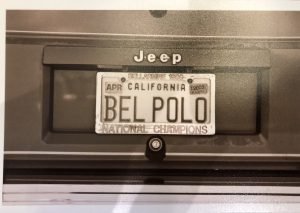 Said Nicolao: “I loved the man. You play for Larry, you play for Mike Schofield, they were tough people. But tomorrow, if I broke down in New Mexico, those are the two guys I’d call first.”

Silverman, who credits Rogers with preparing him for virtually every possible circumstance, was reflective.

“He was very tough and incredibly direct,” he said. “[He] was like a father-figure that you could never really make happy. He created this level of intensity and competitiveness that motivated and drove the team. And bonded us together; he was our common enemy and we had to find a way to make it through the next couple of hours. You were doing that twice a day every day for four years.”

Father Reese, the man who hired him for Bellarmine four decades ago, believes that Rogers would remain relevant in any era.

“If Larry were here today and exactly like he was 40 years ago, they’d get used to him,” said the experienced Jesuit. “These kids are smart. The old, tough guy [pose]—they’d see he had a heart bigger than the outdoors.”