In the new normal that is American collegiate water polo due to COVID-19, competition has been inconsistent at best and often faces insurmountable obstacles—ones that leave most everyone dissatisfied.

Except for the Explorers of La Salle, who will play George Washington at 11:30 a.m. today in the 2021 Mid-Atlantic Water Polo Conference (MAWPC) men’s championship being held at Bucknell’s Kinney Auditorium.

The winner of the La Salle vs. George Washington match will face the host Bison, the defending champions, at 3:30 p.m. for the MAWPC title.

For anyone who might not have caught the news from last year, this is the final run for a program that in the past two seasons has become competitive. Tom Hyham—brought in from Huntington Beach to take over after a dismal 11-53 record under Paul Macht, coach for the program’s first three years—has lifted his players’ competitive spirits and fortunes. Sadly, he will lose the opportunity to finish a rebuilding job begun in 2019; ideally, he will remain in Philadelphia to continue coaching La Salle’s women.

Pre-COVID, the MAWPC included Bucknell, George Washington, Fordham, La Salle, Navy and Wagner, which did not compete this season. For 2021, the conference added Iona from the rival Northeastern Water Polo Conference; the NWPC’s five other teams—Brown, Harvard, MIT, Princeton and St. Francis Brooklyn—decided to suspend play in 2020-21.

Through guile, luck and determination, eight teams, including MACWP West teams Gannon and McKendree, were set to travel to the Naval Academy this weekend for the 2021 championships. But, in a season marked by unimaginable challenges, a smooth conclusion was simply too much to expect.

A coronavirus spike—the first concentrated outbreak on campus since September—forced the Midshipmen to end their season and withdraw their offer to host. Then, Fordham shut down its season due to COVID-19. The Collegiate Water Polo Association (CWPA) looked in vain for another venue, ending up with Bucknell, with a wrinkle. The school’s leadership would allow only two visiting teams to compete besides the host Bison (3-1), tied with Navy for ninth in the latest CWPA men’s poll.

George Washington (1-3)—unranked with 42 votes—was selected. It came down to La Salle (2-4) and McKendree (7-0) for the third and final spot. Both had received 28 votes in the latest CWPA poll; the Bearcats had also won the MAWPC West title by virtue of a convincing 21-8 win over Gannon in the title match.

So, why didn’t McKendree go and La Salle stay home? Strength of schedule was the primary determinant, as the Explorers had faced two CWPA-ranked opponents, Bucknell and Navy. The Bearcats had faced none; their toughest opponent was Gannon (7-2), who the Bearcats beat twice by a cumulative score of 34-19.

According to Ed Haas, CWPA Director of Communications, replacing Navy as host put a number of variables in play. The most important: where to play? In scouring the Northeast for venues, the CWPA contacted 49 potential hosts; only one—Bucknell—agreed by last Tuesday night to take the tournament.

As Haas explained, Tuesday was crucial because the CWPA needed enough time to arrange a successful tournament, one that would produce a winner by 6pm today. That is when the NCAA requires a MAWPC representative as the conference’s automatic qualifier for the men’s national championship—to be contested March 19-21 at USC’s Uytengsu Aquatics Center.

The question is: could Daniel Sharadin, CWPA Commissioner, have done something different so that the three excluded teams—Gannon, Iona and McKendree—could have played for an NCAA berth? According to a statement released by the conference, Commissioner Sharadin did all that he could to produce a fair resolution.

Once the news about the Naval Academy was released and knowing these original options were now unavailable, we immediately began searching for another site. In a 24-hour period we reviewed and reached out to 49 different pools in an effort to secure a venue. The criteria were simple. It had to offer all-deep water and be within driving distance for the majority of the league members, since several institutions were not permitted to fly. The search ended last night at 7 PM, when the final site stated they would not rent to an outside group.

The reasons were clear. Facilities and schools were already booked with a swim meet or other programming, or they were unwilling to rent to an outside group due to COVID restrictions.
Sharadin Statement, March 4

Everyone wants to play

The team with the most reasonable grievance is McKendree. Not only did the DII program from Lebanon, Illinois finish undefeated in an abbreviated season, it won the MAWPC West tournament decisively. Bearcat Head Coach Colleen Lischwe was understandably dismayed that–in a season as unusual as this—her team did everything right and still did not get a chance to play for what would be the program’s first-ever NCAA tournament berth. It could be argued that— in their fifth year of existence—this tournament represented the Bearcats best crack at playing for a national title. 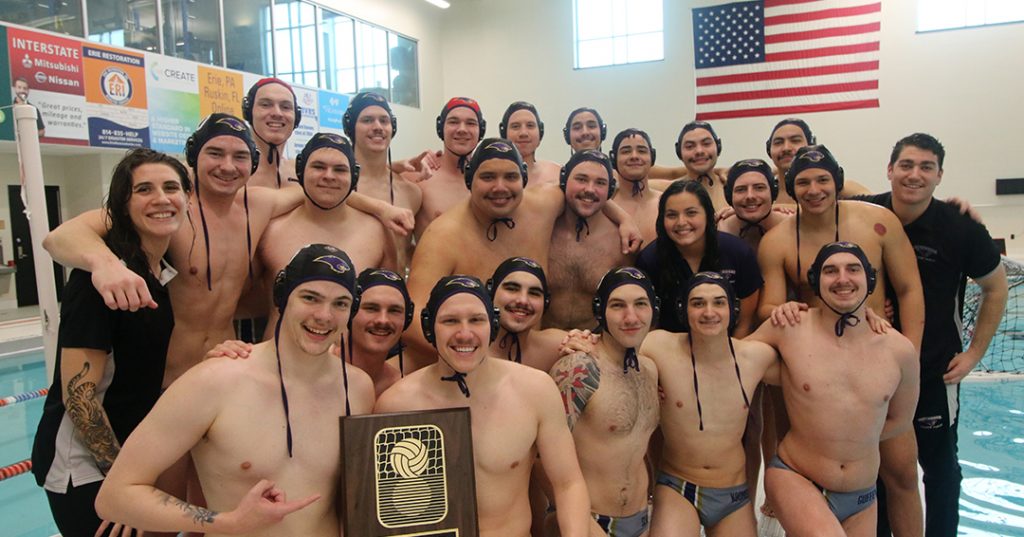 “The CWPA cannot control COVID but they can control their preparedness during a global pandemic and they failed in that regard,” Lischwe said in an email. “Further, the CWPA governance council has provided no justification for their selection despite my reaching out for an explanation and in the end, these shortcomings have ended the season for so many student-athletes. Student-athletes who were not given a fair shot to compete this weekend have suffered an unjust end to their season as a result.”

Lischwe stressed that all three of the jilted teams deserved a shot, though her primary focus is obviously her athletes’ disappointment.

There have been comments on social media that Sharadin and the CWPA overstepped their responsibility in what appears to be a Sophie’s choice. Persuasive arguments can be made for either La Salle or McKendree. But Haas was clear that timing was the crucial distinction—that and the question of travel. When asked why McKendree, with a deep-deep facility, wasn’t considered as a possible venue, he pointed out how challenging it would be to get five teams from the Northeast to a location in the Midwest due to COVID-19 travel restrictions. In the case of the Iona team, the possibility of travel by bus was discussed; if true, the ride would have taken 15 hours each way.

The most serious charge is that the CWPA did not have a contingency plan ready when the Naval Academy became unavailable. This is a reasonable concern, though given the fact that Navy had remained in session for the majority of the pandemic, Sharadin and his staff might have assumed that playing in Lejeune Hall was a safe bet. Clearly, they were wrong.

Which is to say: everyone but the three teams who did qualify will be unhappy. And, there’s no question that this is yet another example of the toll that the novel coronavirus has exacted, though it pales in comparison to the 525,000 Americans who have lost their lives to the disease.

There is a silver lining in this, assuming one wants to seek it. That La Salle’s athletes have one final chance to compete before their program is shut down makes for a compelling narrative. Win or lose, the Explorers found their way to competition this season and get what we all hope for, which is a moment in the spotlight.

And, given all that we as a country and as a polo community have lost, isn’t that something worth celebrating?