It’s a convenient conceit to wax poetic about life tragically cut short, but in the midst of a global pandemic whose death toll is approaching two million—and almost 320,000 in this country—it feels trivial to speak to the significance of one life in contrast to oh so many lost.

But that may in fact be the whole point; each individual life matters—and any loss is simply one too many.

In the case of Tom Burek, the Monmouth College Director of Aquatics as well as Head Swimming and Diving Coach who passed away on December 12 due to COVID-19, the loss is amplified because the 62-year-old lost a six-week battle with the virus, and was thereby deprived of enjoying his first grandchild, born a month ago. 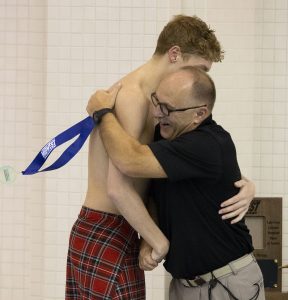 Married for 34 years to Gayle (Hovind), he leaves behind that grandson, aptly named “Burek,” who is part of a deep personal roster that—along with his wife—includes two daughters, a pair of sisters and a brother. Also mourning are the hundreds of male and female athletes he mentored over nine years coaching at Monmouth, young men and women who greatly benefited from the attention and approbation of the one-time state trooper.

A compact, meticulously prepared person, Burek was known for his booming voice—developed as an instructor for the Illinois State Police, from whom he retired in 2012 with the rank of master sergeant after a quarter century of service. There was also his tactile devotion; according to Peter Ollis, who served five years as the Scots’ head men’s and women’s water polo coach, his colleague had an unparalleled passion for competition—no matter how distinguished.

“At his core Coach Burek was a teacher, a fantastic coach [and a] great recruiter who developed multiple conference champions,” Ollis said on Sunday in a phone call. “We’ve had kids who won conference championships and [others] who dropped 10 seconds in their 500 [yard] times to finish dead last in conference–he was as loud and excited for either kid.”

If being “real” is the mark of the man, Ollis said his friend and mentor was all that and more.

“There was a pure bond—you can’t fake that; all the kids could feel it—and that’s the relationship he had with his athletes.”

He marveled at how his boss—who, because of cost constraints was also his assistant—was prepared for any circumstance. According to the now former Fighting Scots’ polo coach, Burek carried a briefcase with him wherever he went—contained with magical solutions for whatever might ail his athletes—both in the pool and out. 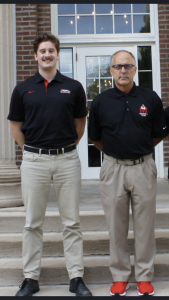 “His level of organization is something I’ve never seen in my life,” Ollis said. “He was known for two things: his yellow Crocs and his briefcase. There was no situation that you could come up with where he didn’t have a previously printed up, laminated piece of paper that had every solution. His level of dedication and organization was unbelievable.”

Ollis then quoted Coach Burek’s belief: “I expect the athletes to treat us with a certain level of respect, and I better be prepared to treat them with the same respect by being organized.”

Dan Nolan, retiring this month as the Fighting Scots’ Sports Information Director after three decades of involvement with Monmouth athletes—including two decades working in the school’s athletic department—worked with Burek the past decade.

“Coach Burek is that rare individual who brought so much to the table, he literally cannot be replaced,” Nolan said in an email. “His impact reached thousands of kids, even non-swimmers, over the course of his lifetime as respected member of the Illinois State Police and now as Monmouth’s dearly missed swim coach.”

Like Ollis, Nolan’s recollection is of a coach and person who cared deeply about his athletes—many of whom are now reciprocating.

“Records, conference titles and national qualifiers can be counted, but the value of his caring, nurturing personality can only be quantified by the number of tributes he’s received via social media and elsewhere—from those he’s coached, coached against and simply interacted with as part of his outgoing and upbeat personality.”

Count his opponents among those who couldn’t resist the integrity and even-handed enthusiasm Burek oozed.

“He genuinely had an appreciation for the sport and for every swimmer, even from other team,” Christopher Sykes, Illinois College swim coach, said in a remembrance on the Monmouth Athletics website. “He would go out of his way to shake hands and congratulate an athlete on an amazing race. This example is demonstrated within his own team. His athletes always demonstrated genuine sportsmanship and portrayed a strong sense of camaraderie.

“I will miss talking with him on deck at meets and after each season,” Sykes added. 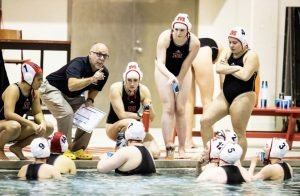 As will many; there remains a collective disbelief that someone with so much vitality is now gone. “He was an in-shape, healthy guy,” said Ollis. “Not the fastest runner but he’d put in 8 – 10 miles around campus pretty consistently.

“That’s what compounds the shock.”

The retiring Sports Information Director saw sly humor in his weekly interactions with the now-deceased coach.

“As a retired information officer for the Illinois State Police, he was a tough guy to get a good quote out of during our weekly meeting for the Scots Scoop newsletter,” Nolan wrote. “I’d say something like, “Well, Preston had a good meet, set a new record in the backstroke (…and leave it open-ended for Coach to comment).”

“Coach usually answered with a simple ‘Correct.’”—leaving Nolan to wonder whether that curt answer was “intentionally messing” with him.

Ollis affirmed that Burek represented all that it meant to be a Fighting Scot.

“You are the pillar of your program,” Ollis said, quoting Monmouth Athletic Director Roger Haynes. He added: “I don’t believe anyone’s represented that better than Coach Burek.”