With yet another unarmed African American man shot by a police officer—as Jacob Blake was earlier this week—our country is again in the throes of social and racial upheaval. On Wednesday a number of professional athletes, many of them Black, responded by boycotting their competition.

This represents a remarkable moment in U.S. history that many across the nation have responded to. 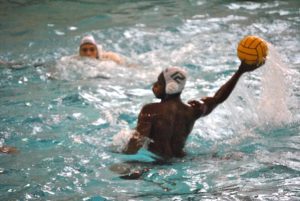 SIU’s Arnold in the Field

One is Kristopher Arnold. A one-time football player from Markham, Illinois who made the switch to water polo upon entering West Virginia’s Salem University as a freshman, Arnold understands how important it is to take a stand. A person of color who has faced discrimination, in 2015 Arnold finished his four-year Salem career with 663 saves—second all-time in the Tiger record book—178 steal, tops in program history.

Now back at Salem as a graduate assistant in its athletics department, Arnold spoke with TotalWaterpolo about his sports switch, the challenge of playing goal for Salem despite limited experience and his and others frustration and struggle with overcoming bias in America.

– You were a two-sport athlete in water polo and football at Bremen High School—sports which are not usually compatible.

I began playing football at a young age, nothing organized until eighth grade. I played all four years of high school. My freshman year, I injured my knee. I was able to finish the season, but had to have surgery.

In order to stay in shape, I picked up water polo. The first time I ever saw the words “water polo” was when I was getting set up for freshman football. There were cards we had to fill out all for our physicals, just so they knew which sports we were playing.

My first year of water polo wasn’t the best. I struggled with getting up and down the pool. Craig Capell, my coach freshman year, doesn’t remember me playing. There were times where we’d go back to stories of freshman year and he’d be like: “Oh, I didn’t know you played.”

– How well prepared were you to get in the water and master polo basics?

I wasn’t prepared at all. My father was a swimmer [but] I didn’t learn that until my junior year. I had a PE teacher [Sue O’Sullivan] my freshman year who was the girl’s coach. She helped me learn the egg beater and the different things that I would need to play.

It wasn’t until my sophomore year where I got my grounding in the sport and started to establish myself.

– Not a lot of athletes of color play water polo. Who else on your high school team was African-American?

– How else did your time on the gridiron help you in the water?

I don’t think there’s anything that transitioned from football into water polo—maybe not until I became a goalie, where throwing a football and throwing a water polo ball was something that was similar. And though I didn’t play quarterback. I was familiar with tossing the pigskin around.

My football teammates weren’t very understanding of the sport. Some of them came out to watch me play but it was hard for them to understand what was going on.

– In your college career at Salem you own a number of records: steals, assists and saves. Did you know where you were going to fit in best in the water?

In high school, I only played goalie for a couple quarters at the JV level. I was an offensive and defensive guard, so I didn’t start playing goalie until my freshman year [at Salem]. Coach [Rob] Bullion was recruiting [another] goalie, but he couldn’t come, so we were short. 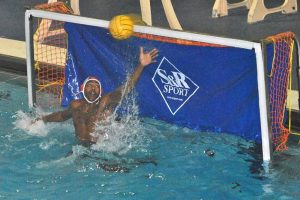 Arnold Makes the Save

– The atmosphere in Salem, West Virginia must be different than a metropolitan area in Illinois.

One of the culture shocks for me coming to Salem was the amount of activity—there’s not much around. There’s a bowling alley that’s 20 minutes away from the school. There’s a movie theater, that’s probably 25 minutes away, along with a [shopping] mall.

The next biggest attraction, probably was a mini golf course, 30 to 35 minutes away. I wasn’t able to travel 10 minutes down the road to get into some activity. It more planning for us to do things, but we were still able to do things as a team.

– The mindset of a good team is you stick together through thick and thin. Did you believe your teammates had your back in all circumstances?

One of the [examples that] really drove home this was in my sophomore year. We had gotten back from a really rough weekend. [My] teammate were talking about what they had done at their previous schools.

Our coach made a point to let everyone know that no matter where we were before they came to this program, that we are a family now,

We had a morning film session and he really drove home that point. He wore a Gannon t-shirts [where he had played polo] to show it didn’t matter where you were before you got to say them, but now that you’re at Salem, you’re a Tiger and you fight for your fellow Salem Tigers.

– I assume you were one of the least experienced players on your team when it came to water polo skills, but you also were manning the most important position—goalie. How supportive were your teammates?

I was one of the players on the team that had the least amount of experience. I didn’t pick up water polo until my freshman year in high school; some of my teammates had been playing since they were 10 years old.

I had a team captain named Boris Kovavcev. He helped me grow tremendously from my freshman to my junior year when I was in goal, just giving me different things that I can do and communicating where I should be or how I should be taking more command of the game when we’re on defense. 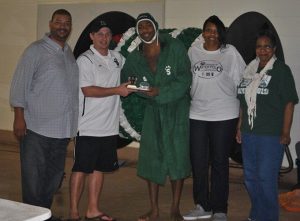 I became more vocal and more of a leader, because in my freshman year I [was] just now getting into it. I’m trying to concentrate on my position [and] on what I need to do.

[Boris] really helped me to expand as a leader the defensive side of the ball.

– Goalie is the toughest position on the field to play—and the most unforgiving. Did you ever feel like you wanted to quit, especially after a tough loss?

I don’t know if there was ever a time where I felt like I should give up.

I’ve always been a fighter. There were some teammates that helped drive across a point to some of my other teammates that this was my first time [in goal] and that it was a learning curve to me. Some of the players were accustomed to having [better] goalies behind them. I wasn’t a terrible goalie, but I [also] wasn’t on the buttons like they were used to—someone able to do certain things and cover [their mistakes].

– You took on the team’s toughest job—because your coach asked you to—even though you weren’t recruited as a goalie.

– Water polo is not a diverse sport. How was it to look at other teams and realize there were very few athletes of color in the water?

In high school, there were only the two to three teams had other players of color. But that changed during my collegiate time. There still were teams that didn’t have any African-Americans, but they did have people of color on their teams.

Mercyhurst, one of our rivals, had athletes of color from Chicago. I didn’t necessarily see a reflection of me, but I was able to look across the pool and see a reflection of all these different backgrounds. With water polo, there’s a large international pool [of players]. And so there might be someone from another country who was a person of color.

– While you were playing did you face discrimination because of your race?

In high school? Yes. Certainly teams [did] discriminate and were racist—[but] it’s hard to put a finger on that. It’s hard to tell someone’s being biased, especially at the high school level. Is it because of the color of my skin or because a ref makes a call —and they’re bad at what they’re doing?

I’ve had coaches tell me that they believe that it was because of my skin. I was getting remarks—basically microaggressions—that black people can’t swim. And that’s after I played a full water polo game and just swam up and down and dominated the game.

The thing that probably [is] the most racist thing that ever happened to me while I was playing water polo, unfortunately came from a member of my own team. I kind of just pushed through it and… when you face these things, there’s multiple things you can do. But as a young man who was unsure of yourself, you handle things a certain way.

The way I handled it was to internalize it.

– As you look at the current situation in our country, are your satisfied that there’s more awareness of racial bias or frustrated it’s taken so long?

Frustration that it’s taken so long for people to actually wake up. But, for most of my life, I’ve lived with the frustrations. It’s all about educating the person next to you about these things. And, I’m glad that we’re finally starting to realize the things that have been happening for a century.

One of the problems is, for most people, they need evidence that it’s happening and the evidence is constantly be shown all over social media, over the news… but it’s hard because as an African-American male, I’m aware these things are happening.

When I was seven years old, my father was a victim of police brutality. I know these things happen. My dad had multiple conversations with me and my brother on how to deal if we were arrested. So, it’s nothing new for me, but I have to constantly prove that these things are real and exist in our world.

– There’s two prominent water polo athletes of color—Ashley Johnson and Max Irving—who are both national team players; Johnson has been an Olympian, and Irving will likely go to the Tokyo Games. Does the color of your skin in a sport much impact or is it all about your performance and what you and your teammates are able to produce?

As far as growing the sport, it’s about representation. When you see somebody that looks like you out there [playing], it makes you believe that you can out and do it too. 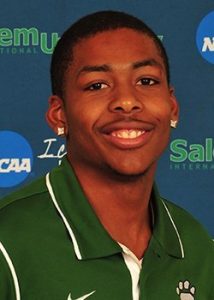 I don’t think there’s anything, that would prohibit somebody [from playing] except for their surroundings. It isn’t easy to find a pool that has water polo in it. Where I grew up there was no pool; in the neighboring towns, there was a recreational pool. But, there was nowhere for me to learn about water polo before high school.

– What are the things that will make for more equitable society in this country?

…[W]hen that change does come, it has to come from the inside.

There’s nothing that I can do as a citizen to stop police brutality. I can try, but [if] the police are not going to not holding themselves accountable to serve and protect, then we, as citizens cannot join the team.

– What might you now say to your younger self if you had the opportunity?

The main part that I would say to my younger self is: Don’t be afraid to speak out. So many things happen because people are afraid to afraid speak up about what is going wrong. They’re afraid that what they say will cause turmoil.

[Now] I would tell myself to be strong, to be confident, be loud—and not let anyone quiet your voice.