In what is a sad day for water polo, Ratko Rudic, by every metric the most accomplished coach in water polo history, today announced his retirement.

The official reason is the expiration of his contract leading Pro Recco, the most successful professional club in international water polo. The reality is that Covid-19, the virus responsible for thousands of deaths worldwide, including 30,000 in Italy, ended Rudic’s career short of one last goal: a LEN Champions League title.

The five-time Olympic gold medal winner—one as a player for Yugoslavia in 1968, and four as a coach with three different national teams—was denied the opportunity to coach the Biancocelesti to a ninth LEN Champions League title in front of their fans due to the coronavirus pandemic.

In a statement released by Pro Recco, the club where he effectively completed only one season of a two-year contract— Rudic lamented that he could not close his career on a winning note, losing a semifinal match in the 2019 Final Eight to Olympiacos in Hannover, Germany. 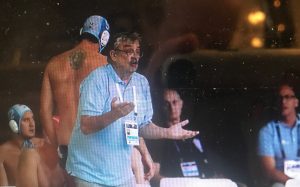 “We have made great strides in all segments, but I missed a game, the semifinals of the Champions League, and the season ended without the desired result. I still carry within me a bitter taste of that challenge in Hannover.”

In stops as a national team coach in Brazil, Italy, Serbia and his native Croatia, Rudic was renowned for his emphasis on fitness and mental toughness. However, it was during a four-year stint as the head coach for the United States’ men’s team that Rudic’s disciplinary approach was highlighted as he sought to end a two-decade slide for the Americans.

The results of that effort were not immediately apparent. In the 2004 Athens Games, Team USA did not advance to the medal round due to placement in a “Group of Death.” Both gold medalist Hungary as well as runner up Serbia and Montenegro were in the same group.

Rudic was gone from the program a year later, returning to Croatia, where he set in motion a spectacular result—Olympic gold in the 2012 London Games—to pair with back-to-back golds won at the 1984 Los Angeles Games and 1988 Seoul Games for Yugoslavia and success with Italy in the 1992 Barcelona Olympics.

Adam Wright was a member of that 2004 American squad. He was also on the team in 2008 when Team USA, now coached by Terry Schroeder—who as a player had twice been denied gold by Rudic in the 1984 and 1988 Games—made a thrilling run to the finals of the 2008 Beijing Olympics, where they were beaten by Hungary in the gold medal match.

Now the head men’s and women’s coach at UCLA, his alma mater, Wright was close to Rudic and credits him with his development as one of the top coaches in NCAA varsity polo. Following are his reminiscences of one of the greatest coaches water polo—or any sport—has ever known:

The very first time I met Ratko was in 1999 while he was coaching the Italian national team.

I remember the first time I walked on that pool deck in in Italy when we were training with the Italian national team that still had many players from their golden years and many top young talents.

But there was one figure that clearly held the attention of all inside the pool—Ratko Rudic. You could tell there was something beyond special about him even though this was my first glimpse into the Rudic world.

Who would know a year later he would become my coach. I will never forget how fortunate I was our team was and our country was to have had the opportunity to work with the greatest coach in the history of our sport. The mystic was beyond real and it was the little things that separated Rudic from all the others.

I am thankful that our relationship has continued to this day and in fact just this year I got to coach against him when UCLA and Stanford brought Pro Recco to the USA. 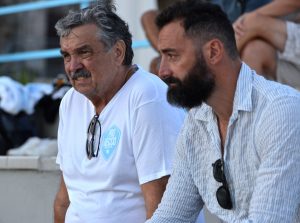 I am saddened the day has finally come for the greatest in our sport to step away. He has been a part of every Olympic Games since Mexico City.

The legacy has clearly been set in stone and his impact on our game will never be forgotten. The game of water polo would not be where it is today without Ratko Rudic.

Although things did not end the way any of us wanted for him this year, he has nothing to look back on. You cannot take away what Ratko Rudic has done—and what he has done is unmatched.

He will still have his footprint on the game as I know he loves this game more than anything so I believe he will somehow someway continue to help move our sport forward. His disciples are everywhere in every country across the world

We are the lucky ones who were touched by the greatest.