From the Vault: USSR Men over Hungary, 1980 Olympics

Covid-19 has derailed the plans of many who anticipated competing at the 2020 Tokyo Olympic Games. The huge event has been postponed until 2021, an outcome that has drawn comparisons with the boycott by over 60 nations of the 1980 games in Moscow, which led hundreds of athletes to prematurely end their Olympic careers or put them off for four more grueling years.

US President Jimmy Carter announced that Team USA would stay home in response to the December 1979 Soviet invasion of Afghanistan. With that the American water polo team’s plans for gold were put aside with lingering effects even after several years. As many athletes noted, the decision to boycott 1980 was almost entirely political. U.S. Vice President Walter Mondale lobbied members of the United States Olympic Committee to vote in favor of it – whose members did by an overwhelming 1,604-797 margin – calling it “a referendum on freedom.”

Those who who were slated to take part in the games often had differing opinions. Legendary U.S. Men’s Water Polo Coach Monte Nitzkowski, who felt that his 1980 team had an “excellent” chance at gold on Moscow, told the LA Times he didn’t think anything was accomplished by the boycott.

“It certainly didn’t get the Russians out of Afghanistan.”

Team members Joe Vargas and John Siman said the boycott took something from team members “that can never be replaced.” The late Eric Lindroth decided to hang up his suit to spend more time with his family rather than continue the weekly training grind.

American water polo athletes who planned on vying for success in Tokyo appear to be more sanguine about their dilemma. By all accounts they have supported the decision to postpone the event citing the very real safety issues that revolve around the deadly pandemic. Politics has barely entered the discussion in comparison to 1980. 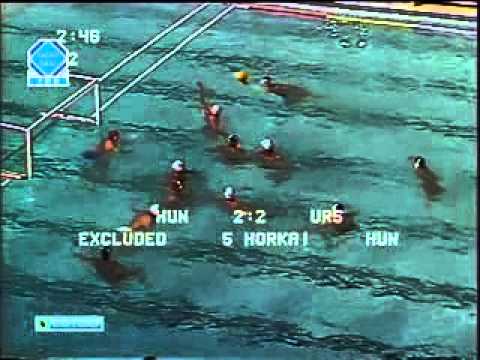 But while the Americans stayed home that summer the games proceeded nearly as planned, minus the Americans and West Germans, who were replaced by teams from Bulgaria and Sweden. The team from the USSR was good and expected to do well, aided by its home-pool advantage and, perhaps, by the slightly diluted field. They did not disappoint their home fans winning all eight of their matches, including two one-goal victories over Yugoslavia and Hungary, eventual silver and bronze medalists.

Their 5-4 medal-round opener versus Hungary is remarkably well preserved, including Russian commentary (dubbed much later, we think) and features legendary figures such as Hungary’s Tamás Faragó (that hair!), and one of our all time favorites, the USSR’s massive, mustachioed Georgi Mshvenieradze (try pronouncing that with your best Georgian accent).

The game has changed much since 1980, which you can observe in this game footage. Centers were largely ball distributors drawing constant ordinary fouls, three of which in a row earned the defender an automatic exclusion. That prompted defenses to engage in triangle switches (now similar to stair-stepping) after that ominous second consecutive ordinary foul. The shot clock was 35 seconds, including after exclusions. You can see it in the overall pace, which while very fluid was simply slower. Defenders were allowed to shot block with two arms.

It was a different time.