PRINCETON, NJ. In what has been a wide-open Northeastern men’s varsity water polo season, Princeton’s decisive 13-9 win last Saturday over St. Francis Brooklyn (13-11, 8-2 NWPC) not only gave the Tigers (21-5, 8-2 NWPC) their first-ever Northeast Water Polo Conference regular season title, but a stellar second-half performance by goalie Vojislav Mitrovic signaled that he and his teammates are primed for a deep post-season run.

“The first half was emotional because it’s Senior Day. I’ve never felt worse at halftime,” the 6-4 Mitrovic said. “Shutting them down in the second half, allowing them to score only once, was amazing.” 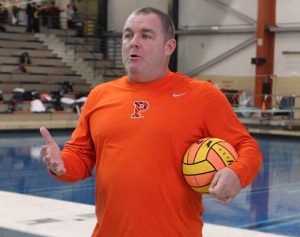 “The first half we were sluggish,” he said after the match. “Second half we played much better defense. When you have a bigger and wider pool conditioning plays into it—it’s hard to cover that much space.”

As they did three weeks ago in a 13-10 win, the Terriers took advantage of lackadaisical defense to jump out to a first quarter lead. St. Francis captain Nikita Prokhin struck twice in a 30 second span in the middle of the period to put the visitors up 3-1, and—after the second of Michael Swart’s two first period goal—Boris Posavec converted with the man advantage to restore the Terrier’s two-goal advantage. A power pay score by Princeton’s Chris Xi with 23 seconds left in the period cut the visitor’s advantage to one. St. Francis’s Jonas Veazey, matched up against Tiger hole set Sean Duncan, picked up his second exclusion prior to the Xi goal, which would hobble him and the Terriers’ interior defense the remainder of the game.

That weakness—and the absence of sharpshooter Botond Kadar due to injuries—remained hidden in the second period, where St. Francis expanded its lead to three goals. Alex Teplitsky surprised Mitrovic with a backhand shot two minutes in, and—after a two-meter power play strike from Duncan—Prokhin completed the hat-trick, beating Mitrovic to his right. A Veazey sweep-in on a rebound with St. Francis enjoying the man advantage and Will Lapkin’s power play goal—sandwiched around Matt Payne’s score with 2 minutes left—put St. Francis up 8-5 going into halftime.

The roof caved in on the visitors after intermission.

The Princeton defense, backed by a fired-up Mitrovic, virtually shut out their guests in an absolutely dominating second half. Swart earned his hat trick two minutes in when he slipped behind the St. Francis defense and beat Terrier goalie Finn Doerries. An exclusion on Xi at the five-and-a-half-minute mark gave the visitors a couple of cracks at the Tiger goal. But their defense was up to the task, as Mitrovic stood on his head to deny multiple Terrier shots.

“Playing as a team really helped us,” Mitrovic, who in 2015 back-stopped Princeton to NCAAs, said. “I stepped up, everyone stepped up.”

Duncan, able to set up shop in front of the Terrier cage, beat Doerries at the 4:43 mark from two-meters to cut the Tigers’ deficit to one. After Payne scored 40 seconds later to tie the match at eight, the Princeton goalie did his best work. A Tiger kick-out at 3:44 gave St. Francis the man advantage but Mitrovic was more than equal to the challenge, stopping two Terrier shots, including a point-blank attempt by Lapkin. Payne then broke the stalemate, converting a 5-meter penalty to put his team ahead for good. 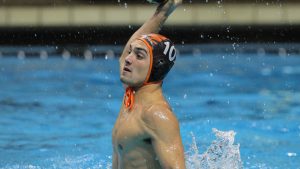 The fourth period was more of the same for the Tigers. They scored three more time—a total of seven unanswered goals—before the Terriers finally got back on the scoring sheet at 2:54, making it 12-9. A tip in by Swart with less than a minute remaining closed out the scoring and had immense meaning. The junior driver garnered a hat trick in the period—and six scores for the match—enabling Princeton to claim first in the conference based upon cumulative goals scored against St. Francis.

Following the win, which earned his team the top seed in the NWPC tournament, November 17 – 19 at Harvard’s Blodgett Pool, Nicolao grudgingly admitted his team’s prospects were promising.

“We need to find a way to play four quarters defensively,” he said. “If we can do that we’ll be pretty dangerous.”

Key to any Tigers’ post-season hopes is their star goalie, who said he’s ready to help lift his team to another NCAA title in his final season at Princeton.

“The championship is a miracle of collegiate water polo. It’s the time that all you’ve been doing for three months pays off,” Mitrovic said. “When the championship [round] comes, every day is one game at a time.”