Fan in the Stands: St. Francis vs. Bucknell

Editors Note: “Fan in the Stands” is an occasional feature about water polo from the spectator’s perspective.

PRINCETON, NJ. St Francis College Brooklyn versus Bucknell in men’s water polo is often a battle royale—no matter where it’s played. A rivalry that at one point was decidedly tilted in the Terriers’ favor—from 1997 to 2011 St. Francis won 24 straight matches—has leveled out since 2011, when Bison head coach John McBride (5-6 career against SFC) arrived in Lewisburg, PA.

That these two teams faced each other on consecutive weekends to open the 2017 men’s water polo season only enhanced the richness of this rivalry, which—like a fine wine—has gotten better with age.

Last Saturday at the Princeton Invitational, a 7-6 win gave new St. Francis Brooklyn head coach Bora Dimitrov his first-ever coaching victory. The Terriers came from a goal down in the fourth period to avenge a tough 12-11 loss to the Bison the previous weekend. 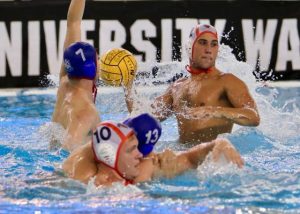 The contest featured sufficient controversy to stoke competitive fires on both sides for years to come, plays that almost overshadowed a gritty performance by Dimotrov’s team, which got individual goals from seven different players.

Much like he was all during his first season in the East, Bucknell star Rade Joksimovic was at the center of the action. With 18 second remaining in the first half and the Bison on the attack, the sophomore from Novi Sad, Serbia, rose up after an ordinary foul at five meters and threaded a skip-shot past St. Francis freshman goalie Finn Dorries to bring Bucknell within one at 4-3.

Or so everyone in the DeNunzio Pool stands thought. But referee Misha Vasilchikov waved off the goal, indicating that Joksimovic had traveled within the five meter mark when he shot, thereby preserving the Terriers two-goal advantage going into the intermission.

15 seconds into the third period, a five meter penalty was called on the Terriers’ Luka Budak. Joksimovic set up to take the penalty shot, flanked on his left by St. Francis’ Will Lapkin. The referees seemed most concerned with Dorries’ position in goal; but when the goalie blocked Joksimovic’s shot, referee Josh Kratz immediately whistled play dead. Then—to the bafflement of Terrier fans in the stand, including Lapkin’s mother Jen—a “do-over” was called on the play, with Lapkin being rolled from the game for interfering with Joksimovic, ostensibly by a kick.

To compound the chaotic moment, Dorries was ordered out of his cage and given an exclusion for disregarding Vasilchikov‘s instruction regarding positioning. St. Francis field player Bogdan Kostic was pressed into goalie duty; on his second attempt, Joksimovic converted the penalty, in essence replacing the goal he had been denied the previous period.

One long time water polo observer noted that he had never seen anything like this sequence.

Once play resumed, Bucknell pressed the attack, with the equalizer coming a minute later on a power play goal by Tommy Stupp. At the five-minute mark the Bison climbed into the lead when a four meter blast by Cooper Dolan—his second goal of the game—found the back of the Terrier net.

But in testament to the winning mindset that Dimitrov seeks to imbue his players with, St. Francis (2-5) rallied for their first win of the young season. 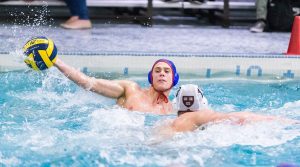 Over the final four minutes of the third period and then into the first minute of the fourth the Terriers had to dig deep to fight off four Bison man-up situations. Then, when given the benefit of the referee’s whistle, junior captain Nikita Prohkin converted a five-minute penalty shot at the 4:49 mark to tie the match at five. Less than a minute later, Kostic went cross cage for the lead. A goal by Jonas Veazey with under three minutes remaining restored the Terriers’ two-goal advantage and proved to be insurmountable, though the St. Francis faithful had to sweat out some anxious moments.

The Bison got one goal back when Marko Djordjevic hit on a skip shot with a minute and a half remaining, but—with three seconds left and the ball in their star’s hand—the Bison (1-6) were denied the equalizer. Joksimovic’s last gasp scoring attempt was stuffed by multiple Terrier defenders.