This Saturday in San Francisco, The Olympic Club will present the Peter J. Cutino Award to the top male and female collegiate water polo players in America. Considered the most prestigious award in the sport, it’s named for the late Peter J. Cutino, the former University of California Berkeley and The Olympic Club coach considered by many to be the greatest coach in U.S. water polo history.

Typically only three finalists are named, though in the case of ties more candidates are put forth to the voters, who are the head coaches from the nation’s Division I schools.

In the case of the men—whose season ended last December—four candidates were nominated, with two pairs of players from the most storied collegiate rivals in the sport: Blake Edwards and McQuin Baron of USC; and reining Cutino Award winner Garrett Danner and Ryder Roberts of UCLA. 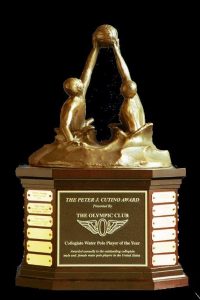 On the women’s side, Rachel Fattal of UCLA, Ashleigh Johnson of Princeton and Maggie Steffens of Stanford were nominated. All three were teammates on the U.S. team that struck gold at the 2016 Rio Olympics. In the 2017 NCAA Women’s Water Polo Tournament Championship last month, Steffens scored three goals, including the game winner with nine seconds left, to help the Cardinal win its third NCAA title in four years. All three titles came at the expense of Fattal’s UCLA squad.

In the weeks leading up to the Cutino Award presentation, Total Water Polo spoke to select coaches regarding what characteristics describe the individual deserving of being named the country’s best player. Given the timing, discussion focused specifically on the top female candidates.

As a coach of a competitive team, I watch a lot of games, many games beyond what my team plays. I try to assess who I felt raised their level and their teammates level the most throughout the year.

I’m pulled a bit by who won the national championship but to me it’s the MVP award. I would hope that other people who have a vote take that seriously and are students of the game. My concern is that other people who have the vote only have a cursory knowledge and only know who’s the star of the team that won the national championship.

That makes sense to me but the coach of the year and the player of the year shouldn’t always have to come from the team that won the championship.

Rachel and Maggie are surrounded by Olympians, and athletes of that caliber, and Ashley is not.  It’s easier to be the best when you have amazing athletes around you. Princeton has great athletes, but they are not UCLA, Stanford level.  I have seen Princeton play several times, and I think Ashley has to do more on her own to maintain her ability then the other two do.

Do you have a comment about how this award is perceived?

I think it’s great for the sport. In my mind it’s the most prestigious award—maybe in all of water polo. I say that because the people behind the award—the Olympic Club, number one—it’s a first-class event. The Olympic Club is a prestigious, old-school club. They do it right.

The other thing is that it’s named after arguably the greatest coach in water polo history in Pete Cutino. For me at least—and I know for many, many others—that adds an element of significance to it.

There were three finalists for the women—which is the limit for candidates. But, how can the voters leave Maddie Musselman off the ballot?

I think it’s great that there’s debate about this because you’re not the first person who has mentioned this to me. I think the debate is good.

The reason why it’s so great to hear this is that means that there are many qualified candidates—to take nothing away from Ashley and Rachel and Maggie—I think everyone knows the respect I have for them. 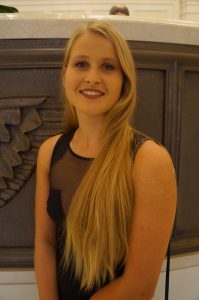 I think you can easily make the argument, not just for Maddie but for Brigitta Games, Stephania Haralabidis or Dora Antal.

That adds excitement and I think it adds value to the award itself when it can go in so many different directions.

The thing is people always look from the outside at goals scored. But they don’t take into consideration the way someone plays defense. The way they lead. How many assists they have. The steals.

If I compare this to the NBA, there’s a lot of talk about Russell Westbrook, James Harden and who’s the MVP of the league. In my mind, LeBron James is the MVP every year. And maybe the next guy is Kawhi Leonard.

Defensive stats aren’t sexy, leadership isn’t sexy. The thing that people always see is the goals. Or, in the NBA, points scored or triple-doubles.

What are the qualifications that you believe describe the best player in the country?

There’s a lot that goes into it. You’re picking the best, so it’s not just one or two things.

I think you have to be great defensively as well, and—this is America, we like winners—so you have had to led your team to some success. But that doesn’t mean you have to be a national champion.

What are the qualifications that you believe describe the best player in the country?

They have to have an X-factor. They have the stats, they also have the ultimate teammate philosophy and exude that when you play because if you don’t you’re not going to get the vote. You have to do more than just score goals or make stops for that matter. Goalkeepers are in the mix as well. I obviously have an eye on all these games and just notice the great work beyond scoring, assists and everything [else] that comes with being the ultimate candidate.

About having won a Cutino Award:

That was a long time ago. The game has changed so a lot. I’m glad I’m not playing the game now. It’s a lot more difficult than it was back then. A lot of physicality, the grabbing, the wrestling elements which I think in some respect are exciting but it’s a totally different game.

Beyond that I do think I have a decent eye for what it takes to be a good teammate and it’s easy to see when someone’s fulfilling that in the water or not. [A player] may be a hot shot but that doesn’t’ necessarily make you a champion with your teammates.

That’s what I look for—thinking about teammates. 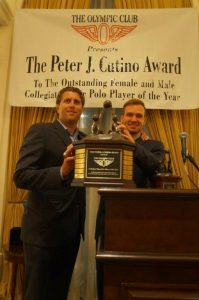 You have a player on your roster, Maggie Steffens, who is arguably the best player in the world.

She is a leader in every sense of the word, and makes everyone around her better. Her contributions are so far beyond what you see when she’s in the game playing. It’s happening on the bench during games, happening before the games, when we’re getting ready to play and every day in training. Even when we’re in the training room, the way she goes about staying healthy, getting stronger. Her desire to get better every day makes her an incredible role model.

She’s also doing everything she can to lift others who aspire to improve. She is such a servant to our team and our program that I think we’ll be feeling that impact for many years.

What you describe sounds like the characteristics for what would define the nation’s best player.


People who vote for awards are one small segment of any given enterprise. It’s the same with ours. If you were to ask anyone who’s been a teammate to Maggie what she has meant to them, the list of accolades would be huge—the list of her contributions would be limitless.

I think the praise they would have for her would go so far beyond any awards.

And she’s also absolutely not focused on that. She’s not at all driven by results but by each step along the way. She embraces that daily challenge and has the same enthusiasm at 6 o’clock in the morning in the weight room as she does with a minute left in a tie game.

Other than Olympic years, I would say USA women’s water polo across the board is the most talented and highest level of play anywhere in the world. You can get to the world championships and the Olympic games and it might be a higher level but the U.S. has had so much overwhelming success globally that you expect this is going to be great water polo, Then you bring in these all-world players from the Netherlands, Greece, Australia, Spain, Hungary and it’s a recipe for incredible water polo.

The standard is so high that there’s always going to be a ton of great players. Certainly when you get to a post-Olympic year and the way our sport is improving within the US but even world-wide. Every year it should be a higher standard of play. So I think there are so many great players and amazing athletes that it’s fun to see how and why it is that we’re so good at the Olympics and the World Championships.

I don’t know if the Cutino Award is a bigger deal now because of the quality of play. 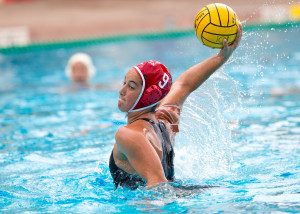 In terms of Maggie—and so many people are talking about. That’s neither here nor there. What we know, and what our players see is what she does every day to make them better. People on the world stage can say that she was an MVP and the highest vote getter in the media poll after 2012 and the highest score and the same thing in 2016. And two gold medals and the captain of this team. So she’s got a good resume.

But she is focused right now on us playing great tomorrow. And that’s really all she thinks about. It helps us all stay focused on what’s important now.

The Cutino Award—Pete Cutino is such an icon in our sport, and he embraced that you’re only as good as your last workout, your last game, and that hunger to just keep getting better.

In my opinion it has to be someone who makes people around them better, who is obviously a hard worker and not just relying on talent.

It’s not about the season itself, because I’ve seen throughout the years a [player] have a great year and then when the finals come around the player coasts. Scoring 5, 6, 7 goals against an opponent in a game that’s not as important.

If they’re not doing anything in the finals, to me you’re not a great player. I always value the player most how they play when it counts. And that’s to be determined. We need to see which of the players lead their team to the final and who’s going to be the toughest and best in the end.