GREENWICH, CT. For the first time in East Coast water polo history, a girls’ team from New York City participated in Northeast Zone (NEZ) qualifications for USA Water Polo’s Junior Olympics tournament. Eleven 14-U girls from the Brooklyn Heights St. Francis Water Polo Club made the trek to the Greenwich YMCA and joined 41 other teams from Connecticut, Maryland, New Jersey, New York and Pennsylvania to compete in the first phase of what is the largest age group water polo competition in the world.

The results were encouraging for a team that—due to busy schedules—assembled completely in the water on Sunday for the first time. The Greenwich Girls overpowered BHSF by 17-2 in the morning’s opening match. In the afternoon, the Brooklyn team trailed 5-3 after the first period before a nine-goal offensive onslaught in the second period doomed BHSF to an 18-4 loss.

“For me the best part of this experience was seeing the girls excitement after their first game,” Husak said. “Not only was it their first time all being in the pool together, but the first opportunity to play against an all-girls team.” 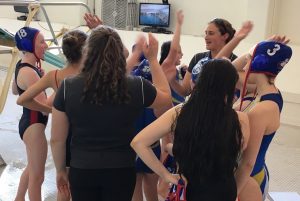 Following their match, BHSF Toasts Navy – and themselves

Parent volunteer Julie Finn was excited about a bright future for BHSF.

“Watching this team play together for its first time was an incredibly exhilarating experience,” Finn, whose daughter Molly has played for BHSF since 2016, said. ” The girls gave it their all in this history making moment!”

According to Greenwich Aquatics’ Kim Tierney Wang, this year’s competition contained the most teams in NEZ JO qualifiers since USA Water Polo revised their regional format a decade ago. The NEZ qualification is one of eight qualifying tournaments that will take place across America from May 12 through June 19.

JOs culminate at the end of July with a national tournament for boys and girls ages 10 – 18 in Irvine, CA centered around the William Woollett Jr. Aquatics Center in Irvine’s Heritage Park.

Tiereny Wang, Senior Manager of Water Polo Operations at Greenwich Aquatics, was pleased by the increase in attendance  of younger players, especially among the girls.

“I am especially excited to see so many younger teams,” she said. “Never have we had nine teams in the 14-U boys age-group and six younger girls teams.”

Despite losing both matches decisively, the BHSF squad still earned a berth in the national tournament. The Northeast Zone is  allotted four 14-U girls’ berths but only three squads competed.

Finn recognizes that there’s an ideal solution for the lack of girls’ teams; do more to promote polo.

“We need to keep pushing forward with full steam to get more girls in the Northeast playing and competing in this sensational sport,” she said.

Husak felt that her team’s effort yesterday demonstrates that better results are on the horizon.

“We lost to some very experienced teams, but the girls weren’t discouraged,” she said. “They were proud of themselves and that is what I hope to continue to teach them as we grow and become more successful.”