LOS ANGELES, CA. An old sports adage suggests that defense wins championships. Given its dominant defensive effort Sunday against Stanford in the Mountain Pacific Sports Federation title match, the UCLA women’s water polo team appears destined for greatness. In a suffocating performance at UCLA’s Spieker Aquatics Center, the Bruins forced 13 steals and held the Cardinal scoreless in the second half on their way to a 6-3 victory.

With the win, UCLA captures the MPSF’s automatic berth in the 2017 NCAA Women’s Water Polo Team, and will be the top seed in the 8-team field that plays May 12 – 14 in Indianapolis, IN. It will be the Bruins 15th NCAA appearance, where they have captured a record seven titles. 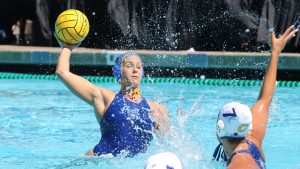 For Rachel Fattal, who led all scorers with three goals while padding her all-time UCLA steals record with two, returning to NCAAs after a red-shirt year  pursing Olympics dreams offers her and fellow fifth-year seniors Alys Williams, Kodi Hill and Alexa Tielmanat an opportunity to ease the  sting of consecutive NCAA Championship game losses (2014, 2015).

To accomplish this, it’s team-first and forever, Fattal said.

“Everyone on our team leads,” she said following the match. “Just because I have a hat trick, I’m not the star; our whole team is.”

While her logic is undeniable, Fattal has already proven her worth, both in a UCLA career where’s she’s third all-time in goals scored (215), and with Team USA.  She and Bruin freshman Maddie Musselman struck gold in the 2016 Rio Olympics.

“We’re an unselfish team, a disciplined team and no matter whose day it is that person is going to step up,” she added. “Today was my day and I did what I needed to do.”

Relaxing after the match, Bruins head coach Brandon Brooks savored the championship win, which builds of what has been a spectacular season so far in Westwood.

“We played really good team defense,” he said. “The players on Stanford—you’re not going to be able to cover them one-on-one—but we did a good job helping back, anticipating, getting some steals.”

Then, stating the obvious, he added: “We made it difficult to score.”

Difficult indeed. Stanford had six power plays but due to defensive pressure the Cardinal was only able to convert once.

After the match Stanford head coach John Tanner was left searching for answers as to how his Cardinal offense, anchored by two-time Olympic gold medalist Maggie Steffens, was unable to fight off the Bruins, even when they had the advantage.

“We struggled with our six on five [Saturday against USC] and just couldn’t get in the rhythm… we threw a lot of really bad passes,” he said.

Describing it as a “skills breakdown,” Tanner acknowledged how effective UCLA was. “We had a lot of pretty good looks that didn’t even get through to the goalie. They did a nice job positioning themselves.”

UCLA opened the scoring at 5:21 of the first period as Fattal rifled home a shot from three meters on the weakside past Cardinal goalie Gabby Stone. The visitors knotted the score at one with one minute remaining as senior Dani Jackovich separated from her defender in front of the UCLA cage and hammered a goal past goalie Donya Dehnad. Maddie Musselman answered right back on the Bruins’ next possession, taking advantage of an exclusion to Katie Dudley to score on the power play, much to the delight of a raucous fan base at Spieker.

After a lob by Stanford’s Madison Berggren tied the score at two early in the second period, a yellow card on Tanner appeared to fire the Cardinal up. Flowing an exclusion on Mussleman, Jordan Raney beat Dehnad from two meters at 4:47 and it appeared that Stanford had all the momentum.

Until UCLA snatched it away and denied Stanford another score.

Fattal—as she has all season—delivered. Just as an exclusion on the Cardinal’s Shannon Clearly expired, she beat Stone again, tying the game at three with 2:24 remaining in the second period.

Coming out of halftime the Bruins were committed to a helping defense that created turnovers, and their formula worked to perfection. After a Musselman steal—one of four on the day—halfway through the period, Fattal nailed a skip shot from four meters that handcuffed her National Team teammate, giving UCLA the lead for good. At 1:13 of the third Fattal and Tielmann played give and go, with Tielmann converting from in front of the Stanford cage for a 5-3 Bruin lead.

The fourth period was all Dehnad’s netminding and UCLA’s cloying defense. The Bruin goalie stuffed Steffens at the 6:56 mark and—following a Stanford timeout midway through the period— twice denied Dudley in front. When UCLA’s Williams struck at 3:58 off a perfectly placed pass by Hill, the Bruin fans could breathe a sigh of relief. Their ticket to Indianapolis was  punched.

Stanford, virtually assured of a berth in the NCAA tournament, now has two weeks to get ready for another tournament—the one that counts the most—where they’ll almost assuredly run into the big, bad Bruins.

Now in his eighth season at UCLA, Brooks knows that success at the nation’s leading institution for NCAA championships is measured in national titles—113 in all. He refutes the idea that success is only about championships.