The #2 Stanford Cardinal needed all the defensive prowess they could muster to stop the #3 Trojans of USC, taking a 6-5 decision in the semifinals of the Mountain Pacific Sports Federation’s (MPSF) Women’s Water Polo Tournament. Anchored by goalie Gabby Stone and a bend-but-don’t break approach towards the explosive SC offense, Cardinal defenders limited reigning Cutino award winner Stephania Haralabidis to a single goal late in the match while holding the Trojans to their lowest goal total since a 5-3 loss to UCLA in February 2015.

With the win, Stanford advances this afternoon to the MPSF Championship match against #1 and top-seeded UCLA. The Bruins eked out a 9-8 win over a determined Cal squad to advance to their first MPSF final since 2015.

“Exciting, tight battle,” Tanner said immediately after the match. “Both teams struggled to execute in that final opportunity. I was really proud of the way our team hung in there.”

As they did in a 12-8 win three weeks ago which snapped USC’s record 52-match win streak, Stanford broke out to an early 2-0 lead, this time on goals by Kat Klass and Jordan Raney. USC’s Ioanna Haralabidis answered with goal in front halfway through the first, then Maggie Steffens finished off a beautiful pass from Mackenzie Fisher to put the Cardinal up 3-1 at the end of the quarter.

After both teams failed to score in a tight second period, 40 seconds into the third the Trojans got a quick score from their talented senior center, Brigitta Garnes. Tanner admitted that this goal changed the complexion of the game.

“To come out in the third quarter and get that first goal right away after they had struggled to get anything done in the half—that lifted the pressure off of [USC],” he said.

And put it squarely on the backs of the Cardinal. But—as has happened all season—one of Stanford’s stalwart players stepped up. 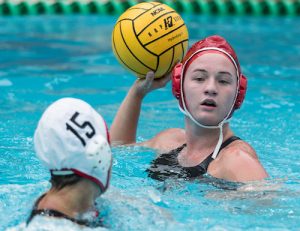 Unlike teammates Mackenzie and Steffens, Raney does not possess an Olympic gold medal or two. But on Saturday she came up big twice, none more so than when she connected on a penalty shot two minutes deep into the third period that put Stanford up again by two.

“We count on her to do a lot on defense and of course on the offensive end, and she had a great game,” Tanner said of of his junior 2M player. “She’s a big time competitor who has a bright future internationally.”

USC’s Garnes struck again less than a minute later, then—following a Steffens miss on a penalty shot—the Trojans had numerous chances to tie.  But they never got the equalizer.

“We had our opportunities, we created many of them,” said USC coach Jovan Vavic. “I’m pleased with the fight and the desire. The ball didn’t bounce our way in the beginning but we stayed with it.” 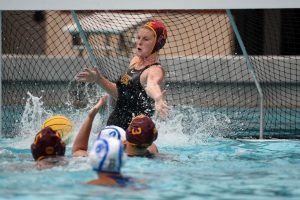 Stephania Haralabidis was in the middle of a number of those missed opportunities. The Trojans’ leading scorer simply couldn’t connect on offense and got exposed on defense, twice whistled for 5M penalties. The most damaging one came halfway through the fourth quarter, enabling Fischer to connect on a penalty shot past USC netminder Amanda Longan that put Stanford up 6-4. An atonement goal by Haralabidis a minute later again put pressure on Stanford but the Cardinal defense held fast.

USC’s Vavic saw a silver lining in only his teams’ third loss in the last 57 matches—though the Trojans won 52 straight of those before suffering 3 defeats in a span of five games.

“A way better game for us than the last one we played [against Stanford] and gave up 12 goals,” he said. “We fought all the way to the end.”

One impartial observer was impressed by the extremely high level of play between perhaps two of the world’s best squads. Referee Mark Koganov, who also was on the deck for men’s and women’s play at the 2016 Rio Olympics, pointed out that a numerous members of both teams play for their national teams, including Fischer, Steffens and Stone for Team USA. In his estimation, very little compares to U.S. women’s polo.

“No one in the world can even get close to the U.S. national team,” Koganov said. “This level of a game here at MPSF, you can compare it to best women’s leagues in Europe. It is really high class water polo.”

Stanford’s coach is unconcerned about the level of play in the conference; he’s happy to be in the final with a chance to grab a title.

“We’re really excited to be playing in the last game,” Tanner said. “We love being the last ones in there.”