Much to the delight of enthusiasts both knowledgeable and otherwise, the sport occasionally surfaces in pools and on TV screens in New York City. This past Saturday was one of those moment where —without much effort—one was able to spend the entire day watching polo live and televised, including a critical match between #1 University of Southern California and #2 Stanford, two of the world’s best women’s water polo teams.

The day starts at St. Francis College in Brooklyn Heights where all eight teams in the Metro Atlantic Conference (MAAC) are scheduled for six matches. It’s an opportune by-product of the MAAC’s push for economic efficiency—bringing teams and referees to a single site. 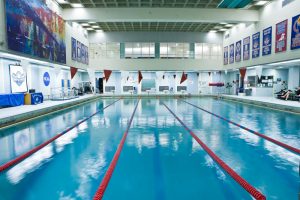 Of the eight contest in the Terriers’ six-lane, shallow deep pool, one in particular stands out: an early morning match-up between Marist and Iona. Both are favored to finish in the conference’s top four spots, which guarantees an invite to the 2017 MAAC Championships at month’s end, where the winner gets a berth in the NCAA Women’s Water Polo Tournament.

Adding to the intrigue of this match between bitter New York rivals: from 2004 until last summer Chris Vidale enjoyed a 12 year career at Iona as a player and as an assistant coach—until he jumped ship to take over the coaching reins at Marist. Two weeks ago, in the first meeting between the two schools since Vidale’s departure, Marist railed from a three goal, fourth quarter deficit to stun the Gaels 13-11 in overtime.

Today, the most important measure clearly favors the Red Foxes: they field 18 players—twice Iona’s number. As if to prove their superiority, Marist broke out to a 6-2 first period lead, threatening to turn the match into an early rout. That it didn’t reflected the patience of Iona coach Brian Kelly, once Vidale’s coach and mentor, who exhorted his thin roster to respond. Which the Gaels did, scoring five of the next six goals over the next period and a half, a comeback emphasized by Iona goalie Britten Vilander’s half-court buzzer-beating bomb which sliced the Red Fox lead to one, 7-6 at the half.

The energy expended to catch up, coupled with a second exclusion to star Hannah Schultz early in the third period, proves insurmountable for Iona. Marist (18-12, 10-2 MAAC) asserted itself in the final two periods, outscoring the Gaels (11-11, 7-5 MAAC) 10 to 6, resulting in a highly entertaining 17-12 win for Vidale and his team.

“The second quarter they got a good run on us but we weathered that storm, adjusted and took it from there,” the Marist coach said about his team, which clinched a playoff berth with the win.

“This is a summary of our entire season,” Iona Coach Kelly said immediately after the match. “We play good teams really well and then just run out of gas.”

“I’m happy with how we’re battling with teams, but we have to be smarter when it’s crunch time.”

Following a break for typical New York activities—coffee, errands, navigating the city from point A to point B—your correspondent heads back to St. Francis for another MAAC match-up, this one between Villanova and the surprising Keydets of Virginia Military Academy. The Wildcats under new head coach Rob Mida are experiencing a hangover effect from last year’s run to the MAAC Championships and—more significantly—the loss to graduation of goalie Julie Conrath, last season’s MAAC defensive player of the year.

While Villanova is fighting for its playoff life, VMI is enjoying its best season in the program’s brief (six seasons) history.

Before his team hits the pool for a 4pm tilt, VMI head coach Ryan Pryor spoke about his team’s remarkable transformation from a disastrous 8-19 campaign in 2016—which included only three MAAC wins—to a 20 win juggernaut that is a legitimate threat to three-time title holder Wagner’s grasp on the conference’s championship.

“We were very young last year,” said Ryan, now in his third season at VMI. “We returned almost everybody to this year’s roster and brought in a group of freshmen who are all contributing right now.” 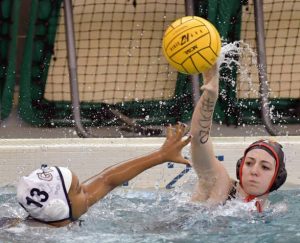 Speaking about his program’s heightened expectations, the Keydets’ coach added: “[B]ringing everybody back has really been a driving force. On top of that our senior leadership this year has really been great. Co-captains [Bailey] Huddelson, [Ceci] Lundy and [Natalie] Rivas have done a great job leading the team in and out of the water.”

Pryor was highly animated on the pool deck as his squad, led by Shelby Barkley, took a three-goal lead in the first period and were never headed, registering a 16-11 decision that clinched a playoff berth for the Keydets (20-6, 9-3 MAAC) while virtually ending the Wildcats’ (11-14, 5-8 MAAC) playoff hopes.

Barkley nets a hat trick that pushes her career total to 193, earning her the program’s all-time goal scoring mark.

Following the win, an emotional Keydets squad, which all season has recognized the tragic death last summer of teammate Sarah Dolitsky younger brother David, gather on the pool deck and celebrate what at season’s start would was an unlikely accomplishment: qualifying for the MAAC Championships.

Following a day of live polo in Brooklyn Heights it’s on to Manhattan for the biggest match-up so far in 2017: #1 University of Southern California—riding an unprecedented 52-match winning streak—against #2 Stanford in a Mountain Pacific Sports Federation (MPSF) regular season contest in USC’s Uytengsu Aquatics Center.

Of course, there’s no time to fly to Los Angeles, but the PAC 12 Sports network is broadcasting the match. The real challenge is which bar in this vast metropolis is the official watering hole for Trojan alumni. Luckily, the New York chapter of USC Alumni lists activities at Pennsylvania 6, which is a spacious, wood paneled establishment close to Penn Station—hence the name.

What doesn’t add up is the USC connection; manager Crissy Oakes explains that Trojan alums initiated the link, mostly as a destination to watch Trojan football and the occasional NCAA playoff game. The USC men’s basketball team advanced to the second round of the 2017 tournament before bowing out to Baylor.

Tonight the fare on the viewing menu is the nation’s top squads served with a heaping side of sizzle; not only is the Trojans’ record the longest in NCAA women’s water polo history, it was begun following a loss to the Cardinal in the 2015 NCAA tournament. Since then, USC has beaten Stanford five straight times, that last two by a single goal, including the 2016 NCAA championship game.

From the game’s opening sprint it’s clear that the Cardinal are primed for this match-up. They break out to a 2-0 lead behind Olympian and freshman Mackenzie Fischer and senior Jamie Neushul from which the Trojans never recover. Opening up a 6-2 lead midway through the second period, Stanford is relentless in denying USC’s Brigitta Games in front of the goal, at one point triple-teaming the beleaguered whole set.

A goal by the Trojan’s Brianna Daboub closes the gap to 7-6 early in the third period, but Jordan Raney of the Cardinal ignites a five goal outburst, as Stanford (17-1, 4-0 MPSF) and senior goalie Gabby Stone (11 saves) prevail 12-8 over USC (25-1, 3-1 MPSF). The win not only snaps the Trojans’ win streak, it evens the season series between the teams at one win apiece, setting up a likely showdown in the upcoming MPSF Championships, April 28-29. 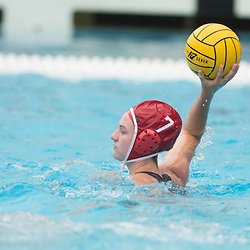 None of which mattered to anyone at Pennsylvania 6. As a massive screen broadcast alluring images of brilliant California sunshine, simmering blue water and the ferocious play of archrivals attacking each other with gusto, the empty bar—as recently as March 19th jammed with USC alums cheering on their men’s basketball team—was a reminder that despite a satisfying day of compelling action, water polo has a ways to travel to be accepted in the Big Apple.