Senior Day provides one last chance for athletes at the end of their college careers to be recognized in the final home contest of the season. Last Friday at Princeton’s DeNuzio Pool saw a bittersweet scene as four graduating members of the Tigers’ women’s water polo team, including Olympian Ashleigh Johnson, said farewell to a large contingent of by family, friends and fans.

Despite the goodbyes there was much to celebrate. With 131 wins—the most for any Princeton class—Collegiate Water Polo Association (CWPA) titles in 2013 and 2015 and berths in two NCAA tournaments, the class of 2017 is the most successful in program history. And there is more to be gained. The upcoming CWPA Championships offer the Tigers a chance to capture yet another Eastern title and with it a berth in the 2017 NCAA Women’s Water Polo Tournament.

Against hapless George Washington (13-16, 1-7 CWPA) seniors Hannah Lapkin (two goals), Morgan Hallock (one goal) and Sidney Saxe (three ejections drawn) rose to the occasion as Princeton (22-3, 7-1 CWPA) dominated in a 16-6 victory. But, as she has all season, Johnson—who last August backstopped the U.S. Women’s National Team to a second consecutive gold medal at the Rio Olympics—crowded the spotlight.

The Florida native kept the visiting Colonials off the board until Jacqueline Bywater beat her almost two minutes into the second period. By then, Johnson’s teammates—with Lindsey Kelleher contributing three of her game-high five goals—had forged an 8-0 advantage.

After turning aside seven Colonial shots in the first half, freshman Kasey Bersh took over in the Princeton net. But Johnson’s evening was not over. Late in the third period she donned number 2 and joined her Tiger teammates in the field. Midway through the fourth period Johnson scored on a powerful strike in front of the George Washington cage, further burnishing her spectacular college credentials, which include the most saves in Princeton history.

Speaking on the pool deck following the game, the fifth-year senior acknowledged how much things have changed for her since arriving at Princeton in 2012. 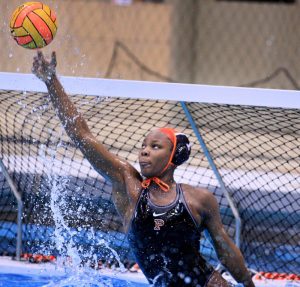 “It’s definitely different now than when I first started here,” Johnson explained. “Then I was constantly working to prove myself. Now I feel like everyone looks up to me in a lot of different ways water polo-wise.”

“Every team I’ve been a leader in how I’ve played but now I have to verbalize that and dictate it to my teammates… and to take a more active role,” she added.

One teammate absent Friday night was Johnson’s younger sister Chelsea, who Ashleigh has played with throughout her career, including two seasons at Princeton.

“She’s been playing as long as I have and we’ve always played together,” Johnson said about her sister, away in Washington, D.C. on a school field trip. “Being able to play with her at Princeton has been a defining part of my time here. It’s been something that I’ve cherished—and I cherish it even more now that it’s coming to an end.”

“I’ll think more about it once the season’s over and realize she’s not coming back,” he said, understandably wistful given the departure of arguably his best-ever player. “You take that Olympic gap year and Ashleigh’s been a part of this program for five years.”

“I didn’t realize how hard the transition was going to be coming back,” he said. “Just playing a year at that level, and then having to play a whole different style of play in college. It’s been a long and stressful year for Ashleigh.”

Friday night’s game was the last home match for Princeton but the Tigers have three big games looming April 28 and 29 in Bloomington, Indiana at the CWPA Championships. Johnson’s coach is confident that his goal and team will come up big against rivals #7 Michigan and #18 Hartwick.

“Ashleigh is the type of player that can take you to some really high levels,” Nicolao said. “We’ve not seen her best game this year. If it happens [at the CWPA Championships] watch out.”

Johnson, perhaps given her experience playing Olympic polo, believes that success is about more than wins and losses.

“The biggest thing for our team is to focus on what makes us successful,” she said. “It’s not always winning. It’s not always scoring goals or making blocks. It’s about how we play together and how we feel after the game.”

“As long as we feel close as a team, we see those open passes and taking those open shots—taking opportunities and taking risks—that’s what will lead us to success as we define it.” 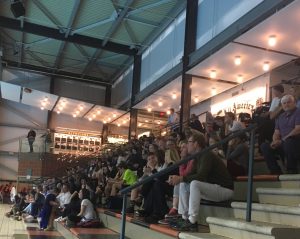 In the stands, one fan in particular was absolutely delighted to celebrate Johnson and her teammates.

Six year-old James Dolenti was at his very first live water polo match but—according to his mother, Hope Caldwell, a compliance officer for Princeton—he watched Johnson religiously on TV during the Rio Olympics. James cheered non-stop for the Tigers, counting out the home team’s goals as they pulled away from the Colonials. His joy was contagious, drawing nearby fans to join his enthusiasm.

Asked about his experience, James replied: “I’m here for the whole game, man.”