Last Monday night at Villanova, Macht and LaSalle experienced another opening night — and a tough start for women’s water polo at the Philadelphia-based school. Playing the host Wildcats in the Pavilion Pool the Explorers dropped a 16-3 decision in their inaugural women’s polo match.

“It’s exciting for a new team to have its first game ever,” said Macht immediately after the match. “Part of the experience will be that the girls grow from this and not get too discouraged.” 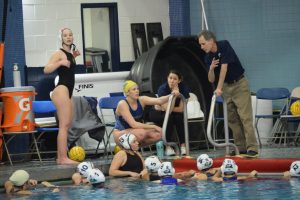 The La Salle coach has recent history to guide him. Last September Explorers men’s water polo began play as a member of the Western Division of the newly formed Mid-Atlantic Water Polo Conference. That program — fast tracked to get in the water in less than a year — posted a 3-12 record.

“The girls love it and they’re working hard,” he said about his current squad. “They know they’re going to make a big jump in improvement.”

Raquel Jimenez of Florida was the first Explorer to find the back of the net while Jenny Fermaintt of Illinois netted two goals. That LaSalle’s roster is geographically diverse, stretching from Oregon to Hawaii to Florida to Connecticut, is a silver lining resulting from starting a program so quickly.

“If you cast your net wide enough there’s going to be a girl from Hawaii [Alyssa Pelanca]— who doesn’t even visit the school — that flies across the country for a new life experience. “

Despite the lopsided score, Kacie Cios’s parents — who traveled from Perkasie, PA — were thrilled to see their daughter play in her first varsity match.

“They tried as hard as they could,” Julie Cios said. Her husband Raymond chimed in: “LaSalle has all freshmen and they’re learning. In a couple of years they’ll be a team to reckon with.”

Derrick DeFusco, a sophomore member of the LaSalle men’s water polo team, was excited to be in the stands for his classmates’ first-ever game.

“It’s different building a team for a sport that’s big on the West Coast,” DeFusco, who hails from Nevada, said. “It’s good that it’s growing in the East; hopefully more schools get water polo.”

On the other side of the pool, the experience for Villanova’s Rob Mida — who Macht mentored when both coached water polo at Wissahickon High School — was bittersweet. Mida, in his first year leading the Wildcats, easily collected his first ever home win as head coach at the expense of a friend.

Given how hard he’s worked, the  2006 Villanova graduate, who played for the school’s club program, has no regrets.  Mida worked his ways up the ranks to get the Wildcats’ top job — first as an unpaid assistant for two years, then was an assistant coach for two more before taking over from Jason Grubb last August.

“There’s only so many job openings,” Mida said. “I’m really happy that I get paid to do what I do love.” 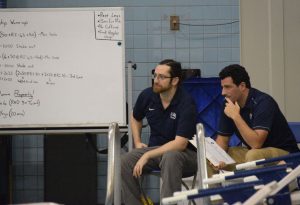 Villanova (2-2) is not known for strong polo programs; the men went from varsity to club status in 1999 and the women – perhaps like a number of sports at the university — are  overshadowed by men’s basketball, currently fielding the country’s second-ranked program after winning last year’s NCAA title in dramatic fashion.

LaSalle and Villanova are now rivals in the Mid-Atlantic Athletic Conference, with the Wildcats picked to finish fourth — and take the final spot in the MAAC playoffs for a second consecutive year — in a coaches’ preseason poll. The Explorers were predictably chosen last, far behind co-favorites Wagner (three straight titles) and Marist (runner up the past three years).

Like his LaSalle counterpart, Mida is refreshingly realistic about his team’s prospects.

“We graduated a lot [of players] so the other MAAC programs — VMI, Siena, St. Francis — they’re trying to get that fourth spot while they’re reaching up for us we’re also going after Iona, Marist and Wagner who are the top three in our division.” he said. “Last year we got a win off of Marist and the year before we beat Wagner. I’m hoping we get one of those this year.”

Mida was excited to have a local rival that ideally will help grow women’s water polo in the region.

“U Penn has a women’s club teams that’s pretty strong. It’d be nice to see them add a program,” he said. “I’d love to see this grow into a rivalry and inspire other teams to compete.”