BERKELEY, CA. On Thursday the sun-drenched stands at the University of California Berkeley’s Spieker Aquatics Center were awash with the crimson garb of a large contingent of Harvard fans, urging their men’s water polo team to a heart-stopping 16-15 OT win over UC-Davis and with it a first-ever spot in the NCAA Men’s Final Four. Today at 3 p.m. PST, a red hue of a different sort — officially known as “cardinal” — will be highly visible at Spieker, belonging to University of Southern California’s faithful, as the top-ranked Trojans (23-1), will face the fourth-seeded Crimson (27-6) in the day’s first semi-final.

The winner of the Harvard / USC match will play the winner of a 5 p.m. PST match between second seed UCLA (25-2) and third seeded host California (21-4) on Sunday for the 2016 NCAA championship.

My guys love to play water polo, they love to play together and we’re not going to just roll over and not have fun playing this game,” he said following the decision over the Aggies — his team’s second-straight overtime win in this NCAAs. “We’re going to take it all in and enjoy being one of the last four teams playing in the country.”

Colton (43 goals) and Harrison (84) have paced his team all season, but since arriving in Cambridge seven years ago, Minnis has preached “family ball.” The Crimson will need a complete team effort to slow down Nick Bell, Lachlan Edwards, Matteo Morelli and the high octane USC offense. The Trojans scored 396 goals in 24 games, and their defense is backstopped by Peter J. Cutino award candidate goalie McQuin Baron.

For the moment, Harvard and it’s fans are savoring a season which has seen the program achieve a number of impressive firsts, including most wins in a season, first conference championship (Northeast Water Polo Conference), first NCAA win (last Saturday against Bucknell) and now a first-ever trip to the Final Four.

On Thursday Noah Harrison, a fifth-year senior, achieved a milestone of a personal sort; his three tallies put him at 286 for his career and made him the Crimson’s all-time scorer. 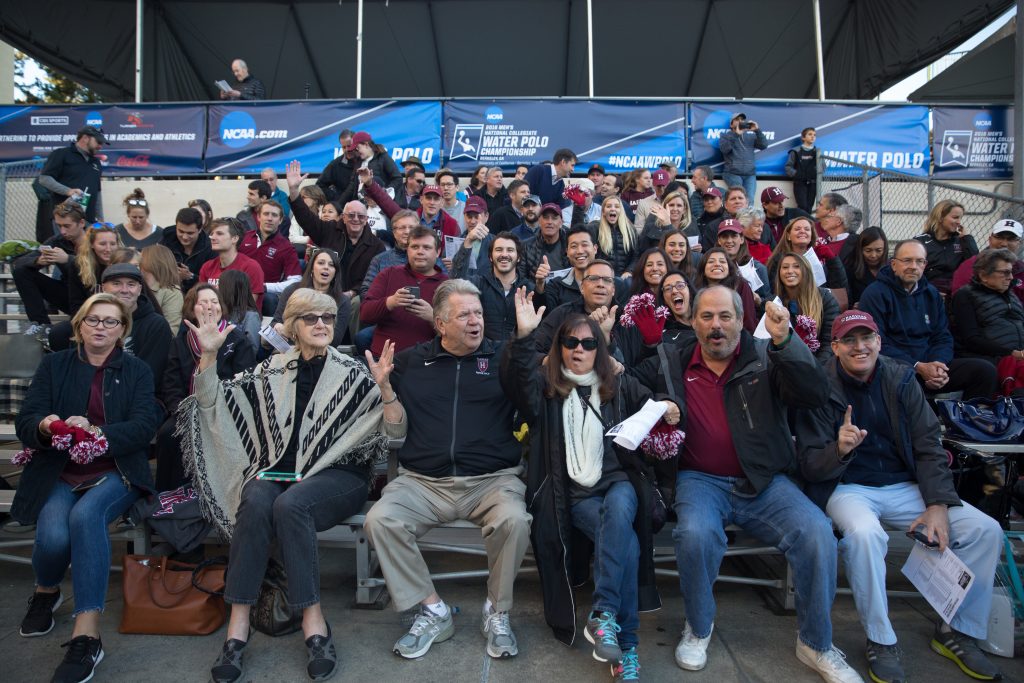 In the mayhem on the pool deck following the match, Harrison expressed awe at the turn of events that has made Harvard one of the few Eastern teams ever to win two games at an NCAA tournament.

“What this team has accomplished is insane,” he said. “To get to this point and execute and reach this level — the highest any Harvard team has ever gotten — it’s indescribable.”

In the stands was Ben Zepfel, who previously held the Harvard goal record with 284. A member of Minnis’s first recruiting class, he was not at all fazed by the program’s success. The year before he arrived the Crimson had a 7 – 17 record.

“That was the goal from the outset,” said Zepfel. “That’s why all the guys in my class decided to go to Harvard. Ted pitched us this dream to build up the program.”

The native Californian who came back home after graduating in 2014, spoke for the hundreds of fans on hand:

“Everyone’s incredibly excited about this and they can’t believe the program has come so far.”

Jessi Wood, assistant coach for Harvard from 2010 – 2014, was brought by Minnis from the West Coast, where she had been his assistant at Castilleja School in Palo Alto. Thursday’s match was a reunion for her with many of the players and families that first came to Harvard during the Minnis regime.

“I’m very, very excited for all the guys on the team and for the coaching staff, said Wood, who now lives in Martinez, CA with her husband. “The seniors were the last class I was lucky enough to coach at Harvard; to see them be so successful, it’s what we always talked about and I know it’s what they dreamt of.”

Peter Richards, from the class of 1992 and now an investment manager in Los Angeles, was nattily attired with a simple crimson baseball cap with an elegant “H” on it. But his excitement was boundless.

“It’s a huge day and a huge win for the program,” he said. “It’s validation for all the hard work that the program has put in.”

The squad he played for in 1988 achieved a top 20 national ranking but Richards said: “Nothing as consistent and disciplined as this team. They’re strong all around.”

Leave it to Harvard’s unflappable coach to put all that has occurred — but also the challenge ahead — into context.

“One thing we’ve been saying since we won the championship back at Princeton, is this team’s legacy has not been written yet,” Minnis said. “I’m going to let them enjoy the end of this story.”

No matter what happens on Saturday, Harvard alums of all eras will relish just how impressive this season has become.

“These guys are winners, they never quit and I’m really proud of them,” said Mike Graff, a 1973 graduate and captain of Harvard’s club team. “You work hard, you have a goal and you help each other: you can achieve great things.”