This past weekend the Harvard men’s water polo team made it’s annual trek to New York City for conference play, it’s first since the Collegiate Water Polo Association recently split in two. Fordham — which switched to the CWPA’s Mid-Atlantic Conference — is no longer on Harvard’s travel itinerary, leaving only Iona in New Rochelle and St. Francis in Brooklyn as the City’s lone representatives in the new Northeast Water Polo Conference (NWPC). Instead, the Crimson on this trip faced Ivy League foe Princeton, which joined Massachusetts Institute of Technology in NWPC membership.

Following a 16-10 victory Saturday morning in New Rochelle against Iona, the Harvard team rode down New York City’s FDR Drive to their personal pool of horrors at St. Francis Brooklyn. Situated two stories below street level, the Terriers almost claustrophobic home pool — and the team that plays there — have often proven an insurmountable obstacle for the Crimson, who over the past decade have won only once in seven trips to Brooklyn Heights.

The home team went up by four goals in the second period, much to the delight of a vocal St. Francis crowd. With the Terriers on the power play, Nikita Prohkin beat Ridgley from four meters out. Harvard’s Austin Sechrest made it 4-2 with a tip-in past Klauzer with less than three minutes remaining in the period, but  Luka Budak then took over the game. The St. Francis freshman rifled a long shot past the Harvard goalie at the one minute mark, then beat Ridgley again with 21 tics remaining on the power play, a three-meter blast that gave the Terriers a 6-2 lead at intermission. 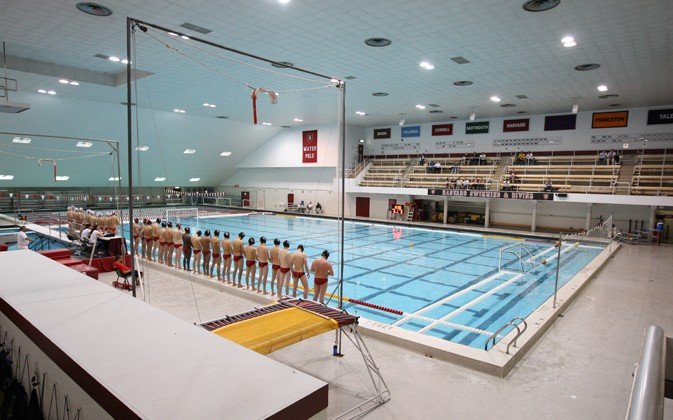 The Crimson tried desperately to catch the Terriers in the third period but the home team refused to relinquish its advantage, as Klauzer — in only his third-ever conference match and first against Harvard — and his defense were brilliant. The visitors picked up third period goals from Nick Bunn (6:02 power play), Grayson Judge (4:38 PP) and Nathan Ondracek (:58), but the home team also netted three scores. Boris Posavec connected from in front at the 5:25 mark, then Kadar completed his hat trick, with goals at the 2:57 and 1:28 marks to give St. Francis a 9-5 lead entering the final period.

Harvard pressed St. Francis for much of the final quarter but could get no closer then three goals. The Cromson’s Viktor Wrobel scored with four minutes left , but Kostic netted his second of the game at 1:13, icing the match for the Terriers and rendering meaningless Bunn’s second goal with less than a minute left.

Following the match Harvard players dejectedly boarded the bus for the trek to Princeton, their next, more hospitable destination —the Crimson’s win over the NWPC-leading Tigers ultimately making the long bus ride back to Boston much more tolerable.