Mehmet Oz — Harvard class of 1982 who played goalie for Crimson men’s water polo in 1980 and ‘81 — is best known as the star of The Dr. Oz Show, a syndicated television program focused on issues related to medicine and personal health.

Dr. Oz, who touts an active lifestyle on his blog, spoke recently with our Michael Randazzo about his continued passion for water polo, the sport’s pronounced health benefits, the concussion risk that links polo and football, the US National Men’s and Women’s Water Polo teams and Michael Jordan, the former Chicago Bulls basketball star.

Michael Randazzo: When did you start playing water polo?

Mehmet Oz: As a youngster in Turkey, where I spent a quarter of my childhood. My friends would throw the ball around and we’d play in the water. It wasn’t too formal but it gave me ball skills and a general understanding of the game.

When I got to Harvard, I realized they had an intercollegiate water polo team. Several of my good friends who were in the dormitories with me —I played football all through high school and was all-state, so that’s where I thought my career was going to be — were having a blast playing water polo. I’d fool around with them, then midway through college I joined the team as a goalie. I wasn’t as good a swimmer as most of the other guys, because Harvard’s swim team is pretty strong and some of my teammates [swam].

I learned about winning and losing, dealing with pressure and building camaraderie with teammates. I’m still close with some of them, these many years later. 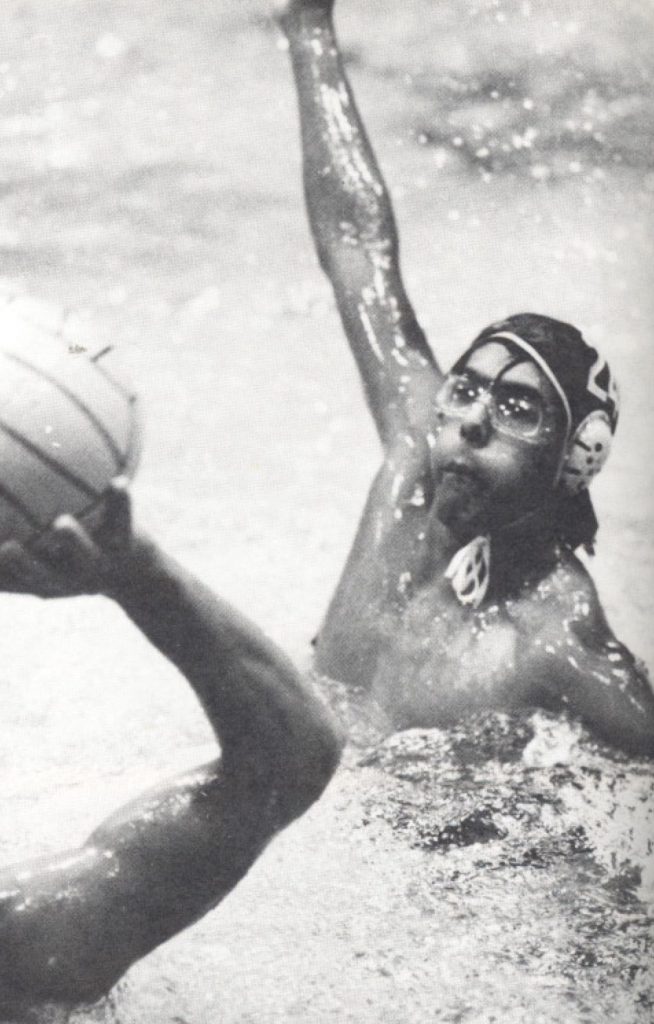 Randazzo: The bonds among water polo players are strong. I was just at an alumni game at St. Francis Brooklyn where players who graduated 10 to 20 years ago still get in the water.

Dr. Oz: Ironic that you mention St. Francis. Whenever I go to Harvard for alumni events I swing by to see the water polo team. I took my family to a game recently — my daughter is a student up there — and it just happened to be the St. Francis vs. Harvard game. [St. Francis] has a very good team and played well that day.

Randazzo: Did any of your children end up following in your footsteps and play water polo?

Dr. Oz: I play with Oliver, who’s my youngest child and a better swimmer than me. Where we live, just outside of Manhattan, they don’t have a water polo team. He plays football, basketball and baseball so there’s not a lot of free time, except when we fool around. We do have a water polo ball and I actually have the head gear.

Randazzo: As a physician focused on wellness and fitness, what about polo makes it such a beneficial workout?

Dr. Oz: What a remarkable cardiovascular experience it is. That’s probably the single best thing about the sport. Without realizing it you can get your heart rate going about as fast as possible.

The whole concept of playing in water with a ball and a goal is brilliant. You may not go out and play water polo because you don’t have the skill set or because it’s too exhausting but the game itself is just perfect. It’s every fun thing you’d ever want to do.

I love the fact that it’s a complete body workout. You obviously have to move your arms and legs to be able to get up and down the pool. But it’s also a sport that forces you to stop doing one type of activity and transition to a different one. Getting out of the water to shoot or block, tackling each other. There’s a lot of mental gymnastics required as well.

I can’t do the same thing every time and win. I’ve got to continually be changing what part of my body I’m using, which way I’m moving, and coordinate it all together, including the mind game behind polo. As a physician I think it’s the perfect sport.

Randazzo: Water polo and football both involve a great deal of physical contact. What risks are common to these particular sports?

Dr. Oz: There are more similarities than people might imagine. There’s a lot of contact in water polo, primarily beneath the water, [and] because of the nature of the sport you’re allowed to foul. You just can’t foul over and over again… if [they] foul you enough times someone gets ejected.

When I played football at Harvard I was blessed not to have any critical injuries. I fractured my wrist but I was able to keep playing. I wasn’t saddled with knee surgeries and I didn’t have any major concussions.

But I do want to touch on this concussion issue. I was of the belief that the major risk in football was concussions. Water polo, at least at my alma mater, has a very similar concussion rate as football.

If you think about it you’ve got some strong people kicking hard as they change directions and there’s very little to protect your head from one of those kicks hitting you. You’re not allowed to kick people in the head in football. You can hit the head in other ways, and it’s the unexpected hit that usually causes the concussion.

There are several players lost in past years to concussions from the water polo and the football teams. If you look at numbers generally — I could be corrected — you’re going to have concussions in sports of that nature, period. Because you’re hitting each other — not on purpose in water polo but it still happens inadvertently.

As I educate myself more and more about concussions I’m reminded that we also have to be as resilient as possible. That’s why I give my kids Omega-3 fats. I take them myself. I have a belief — it’s based on some data but it’s hard to be conclusive — that Omega-3 fats, which are fish oils, they’re the flexible fats that allow fish to swim in cold water. Those fats are primarily found in your brain because there’s more fat than anything else in our brains. The membranes of those brain cells, if they have enough of the right fats in them, might be more resilient.

[Omega-3 fats] have been used in high dosages for miners who have been trapped underground for long periods of time without enough oxygen. Some sports teams give their athletes Omega-3 to help reduce the effects of an injury.

In addition to good nutrition, rest after an injury is important so that’s one of the reasons that all sports teams are now aggressive in getting kids out of sports for as long as it takes for their brain to recover fully.

If we do these things right, we won’t have to ban all contact sports, which is the ultimate battle ground. It’s a lot to ask a child to play sports that don’t allow any risk of physical contact. My third daughter Zoe was captain of her basketball team in high school and had a pretty bad concussion just being boxed out. It happened in a situation where you didn’t expect it.

I want to make sure to take a two-tiered approach. Prevention as much as possible by avoiding or changing sports so that they can be safer, but also make sure we do things preventatively so that we can recover more quickly.

Randazzo: As an alumni you keep track of Harvard’s men’s and women’s team. What’s your thought about the job head coach Ted Minnis has done with the Crimson?

Dr. Oz: I do follow the team. I get the weekly newsletter. Ted’s done a great job — both the men’s and women’s teams have done well. And they have a long tradition of [success], which I’m especially proud of.

One of the things I love about watching them play, besides the fact that I think they’re good sportsmen who play hard and do what needs to be done, is afterwards they go back and study to make the world better in other ways.

[Also] both Harvard polo men’s and women’s get to play against big schools. Polo is played by a limited number of people in the water at one time. It’s not gang warfare. Even if you’re playing a much bigger school. And they go [to California] and play some of the West Coast schools; we faced UCLA when I was playing there [29-5 loss in 1980] which is a whole different experience. At the time UCLA was the top-ranked team in the country. But it was great to be in the pool with them and be competitive for part of the time. [Harvard is] big enough and good enough that we can be proud of this. All the Ivy teams have been great at different times and they represent the league well against other big conferences.

Randazzo: In an Olympic year water polo gets substantial attention from the American public. What are your thoughts about the US men’s and women’s national water polo teams?

Dr. Oz: Everyone’s proud of the US national teams’ efforts in the past. A lot of us are optimistic that [both teams] will do well in Rio.

It’s great for women’s sports to do so well on behalf of the United States. Our soccer team for years now has been doing great for the same reason.

The men’s team is playing in a very competitive bracket. They’re playing Croatia first, which is another great team. We’ve got Tony Azevedo, who’s been to five Olympics now, it’s remarkable. He’s a Stanford grad — there are a lot of Stanford grads on the team — so these are bright, thoughtful athletes who’ve decided to dedicate a part of their lives to playing a sport that they love. And they represent the country well.

They’re playing against some teams who grew up nurturing [their players] in water polo at a very early age. But I’ll keep my fingers crossed. I’m optimistic they’ll get past the first round.

Randazzo: You obviously are passionate about sports. Are there any athletes that you admire?

Dr. Oz: Michael Jordan. He was very much a part of my life growing up. I liked that he was cool under pressure. I got to meet him through Oprah at the United Center in Chicago.

When I was growing up I saw athletes at many levels who were able to lead teams and that’s what I’ve always thought of them — not just someone who can do things best but who shines both by example and [by] the desire to lead his team and make them all better.

Sports are a wonderful training ground for you to be a leader and to learn to do anything you want in life.