An Adoring Texan Sendoff for Reborn US Men’s Water Polo

During the malaise of post-Olympics 2012 few could have imagined that an overhauled US men’s water polo team featuring players averaging 25 years of age would be talking (quietly) about their gold-medal aspirations. Even fewer would have predicted its departure for Rio would have been preceded by a rapturous reception by nearly a thousand water polo-starved Texans.

On Saturday Team USA put on a show for the Lone Star state, which had never hosted the men’s senior team: a friendly versus proud Montenegro before jetting off to Rio. The two squads trained jointly at the University of Houston for the few days before the sold-out match. But over time neighborliness gave way to frayed sensitivities as a near brawl prematurely ended training days before the match.

Any expectations of brutality were soon dispelled as the game began. Two teams aiming for medals have no stomach for injuries that would divert them from that goal. The Americans started quickly, lost the early lead. then regained it late and preserved it after a defensive melee in front of the cage to preserve a 10-9 victory over one of the world’s best.

Appropriately, young and old held the spotlight to complete the spectacle. Connecticut native, June high school graduate, Thomas Dunstan scored a nervy goal from the left-hander spot he may occupy for the next 15 years to tie the game at nine with just over a minute remaining. Less than 60 seconds later grizzled icon Tony Azevedo displayed none of Dunstan’s caution, brazenly and successfully lofting a signature lob to bring the Americans to a 10-9 lead, which held up at the buzzer. 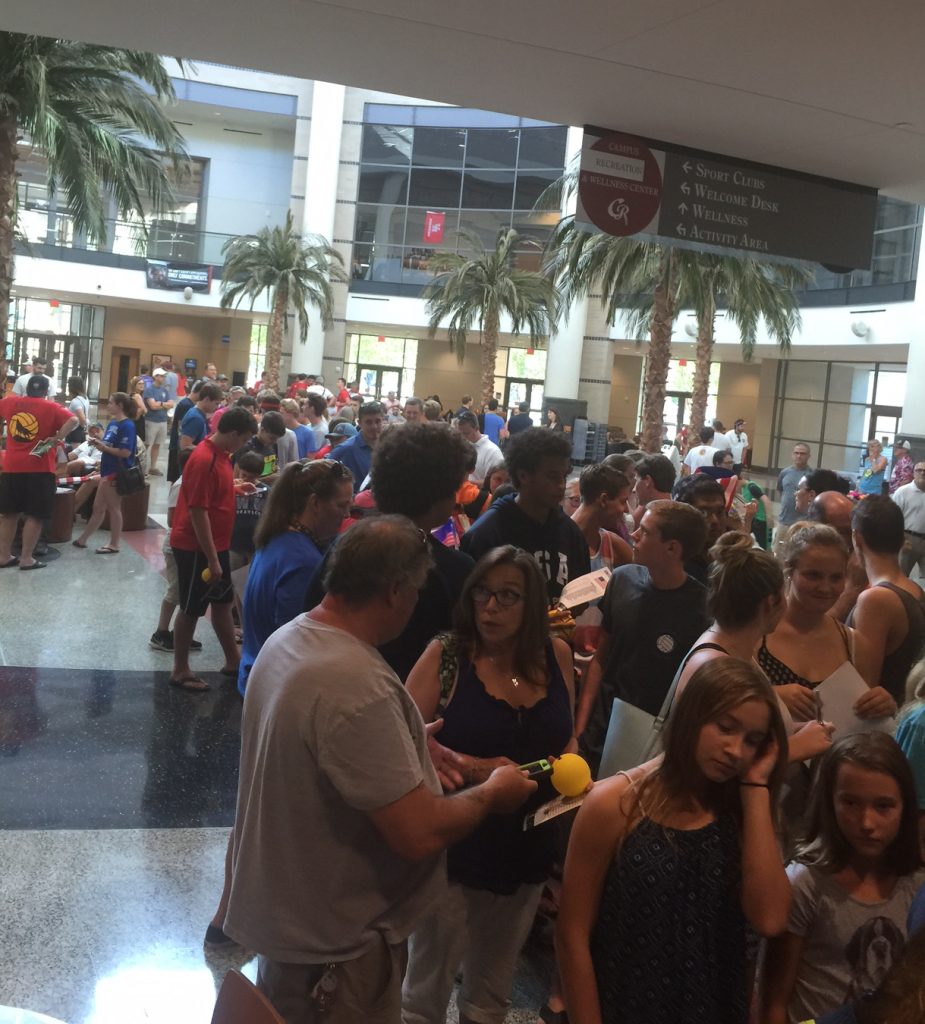 A crowd waits in line to have autographs signed by the USA Mens National Water Polo team in Houston, TX.

Dunstan and Azevedo well symbolize a team reborn, one unrecognizable from the shambolic disappointment of the 2012 London Olympics. It is a team of incomparable youth supplemented by hungry veterans like Azevedo. It is inexperienced: only four members have made an Olympic roster. Yet this group of 13, only recently finalized, has already forged a new appealing identity armed with teenage potential, increased bulk, and fresh coaching leadership widely credited as among the best in the world. The wayward months following the 2012 Games feel like a generation ago.

Eighth place in London was a blow, more so than fans may realize. It ended months of disunity within the program according to several with intimate knowledge of it. Some within the leadership of USA Water Polo were convinced the team was inadequately prepared and that head coach Terry Schroeder wasn’t up to the job, a highly unpopular position after the iconic Schroeder led the team to a surprise silver medal in Beijing four years earlier. He balked at the perceived interference and mistrust.

The feud remained silent while fans were emboldened by the team’s exhibition wins during the summer over Croatia and Hungary. But when the London games began, three unspectacular wins to open were soon followed by four desultory losses. Serbia and Hungary earned 11-6 victories. Croatia crushed the freefalling Americans 8-2 in a wholly uncompetitive game. Schroeder hinted at resigning before a loss to Spain. Australia earned their best finish ever winning a lethargic final match against the US. The Americans finished eighth, false hopes put to rest, a crashing disappointment.

News soon emerged that Schroeder and his staff were not to be retained. After a seeming moratorium on news from USA Water Polo, the organization announced the hiring of USC’s Jovan Vavic as interim head coach. In January he took a squad permanently absent a cohort of veteran (aging?) players, traveled north and lost twice to Canada. There was talk among fans that the program would never recover.

When Dejan Udovovic was hired to replace Vavic later in 2013 he pledged the team would be competitive within three years. He would find the talent, he said. The team would be young, bigger than before, hungrier. Those who did not want to work to become Olympians would be welcome to do something else. It all seemed fanciful. Where would he find the talent? 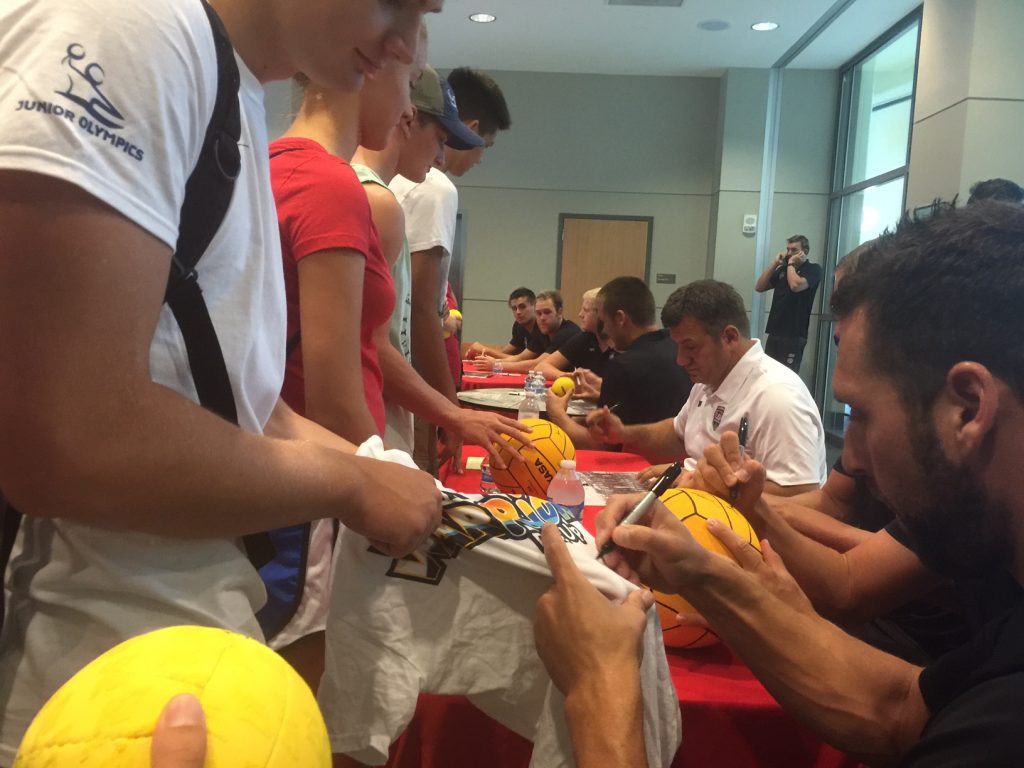 On July 7 from the deck of the USS Midway the 2016 Olympic men’s roster was announced. Dunstan and another high schooler, Ben Hallock, made the cut marking a dramatic break with any vestiges of the past. Udovivic was on the record from the start saying that if players displayed similar skills he’d default to the younger ones. He did. Some veterans with close ties to the team were let loose. It was hard on everyone according to insiders, and a surprise to many fans.

Udovicic made good on his pledge: the team is younger, bigger, technically more talented. So say European observers, who have seen the prolific changes to the program and eye the young talent from afar. They see the kid from Connecticut who made it, the guys from Florida and Ohio who got chances to. They know that the USA is huge – nearly 320 million people and growing. In the right hands that massive and expanding pool of talent is dangerous.

Perhaps not yet, though. Serbia fields a team considered to be one of the best of all time, especially with its prodigious offensive talent. Udovivic’s former squad is strongly favored to gain the top podium spot, something Serbia has not done since 1988 when it was part of an intact Yugoslavia. Few if any believe the Serbians will be derailed from the top medal stand. Then there’s Croatia, Montenegro, Italy, Hungary…

UK bookmakers favor the Balkan teams as well and post odds of +2200 that Team USA will win, making the Americans eighth most likely to do so. A person close to the team called that “a good bet.”

The team’s eyes are on gold in Rio, nothing less – a position unthinkable just two years ago.