The USA men’s team won a 6th consecutive Pan American Games gold medal after beating Brazil in the final of the 2015 edition in Toronto 11-9 on Wednesday. Following the semifinal win over rivals Canada, and the qualification for the 2016 Olympic Games in Rio de Janeiro, the US men could conclude their successful week in Canada by clinching yet another Pan Ams gold. The difference in the match-up with Brazil was already made in the first half by the Dejan Udovicic-coached side.

In the second period Brazil got back to 2-2 from being 2-0 down but the following 3 goals were scored by USA as they grabbed a lead than would be maintained until the end despite Brazil hanging on in trailing 2 goals. In the final quarter it was Josh Samuels who scored from extra man but saw Bernardo Gomes quick to respond on the other end for the 11-9 score. And with still 5.37 to go, the Brazilians looked to have plenty of time in their attempts of forcing a comeback. However sloppy play and an excelling USA goalie Merill Moses prevented Brazil from scoring in the remainder as USA held on to win and claiming their 6th straight gold medal.

Canada took the bronze medal by dominating Argentina in the second half to win 16-8. Mexico finished 5th thanks to a 11-14 victory over Venezuela while Cuba took over in the second half of their match-up with Ecuador to triumph 13-6 and finish in 7th place. The Pan Ams top 3 will now shift their focus to Kazan, Russia where on July 26 the water polo tournament of the 2015 World Championships will get underway. Canada and Brazil will meet already in the preliminary round as both were drawn in group A. 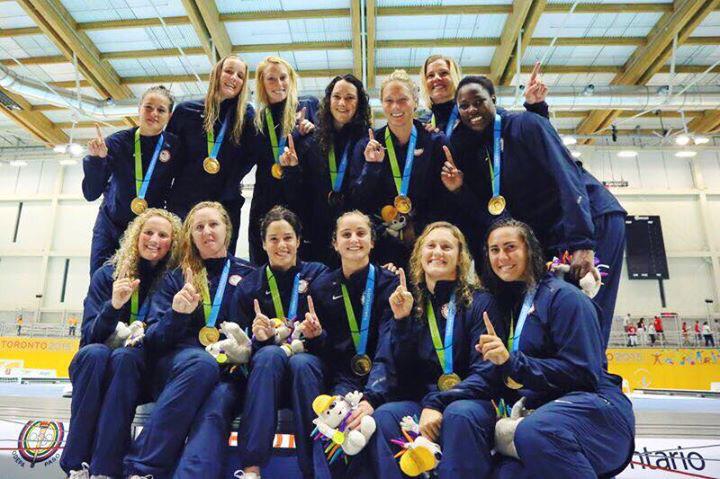 In dominant fashion the USA women’s national team claimed a 4th straight Pan American Games gold medal in Toronto on Tuesday. In the final even arch rivals Canada could not come close to stopping the reigning Olympic champions who walked in the second period and did not looked back on their way to a 13-4 victory. Maggie Steffens and Courtney Mathewson led Team USA on offence scoring 4 goals each. Monika Eggens netted 2 of Canada’s 4 team goals. Brazil claimed the bronze medal thanks to a 9-6 win over Cuba. It marks the 4th bronze medal for the Brazilian women since the inaugural women’s water polo tournament at the 1999 Pan Ams. Puerto Rico finished 5th holding off Mexico 12-11 while Venezuela took 7th place topping Argentina on penalties: 8-9.