The US men’s water polo team has officially earned a spot in the 2016 Rio Olympic Games. 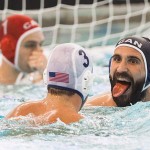 Canada’s George Torakis sticks his tongue out at Alex Obert of the USA, centre, during the men’s water polo semi-final match at the Pan Am Games in Markham, Ont. on Monday July 13, 2015. Mark Blinch/The Canadian Press

As was broadly expected Brazil defeated South American rivals Argentina 15-9 in a Pan American Games men’s water polo semifinal on Monday in Markham, Ontario. That win combined with the USA’s nervy defeat of Canada earlier in the day triggered social media celebrations and finalized travel plans for the American team and its fans.

The men’s team is going to the OLYMPICS! Congrats boys! Well deserved #RoadToRio the Olympic Dream, gives me the chills everytime 🇺🇸 @USAWP

Team USA still must face Brazil in the Pan Ams gold medal match. Under normal circumstances Team USA would have to win that game in order to earn the single Olympic spot reserved for the Pan Ams champs. Brazil automatically qualifies for the Olympics as the host country. Thus, a second-place finish behind Brazil at Pan Ams is sufficient for the US to earn a place in the Olympic tournament.

The USA Water Polo Men’s National Team has qualified for the 2016 Olympic Games. @Bonnie_D_Ford on the clincher http://t.co/kRzrnBzKTt

More on the win over Canada from our partner, Waterpolo World’s Tim Hartog:

The match-up in Toronto was expectedly close even still in the fourth quarter when John Conway got Canada back to 6-5 with 4.37 to go. In the next minutes however USA looked to decide the outcome in their favour. Tony Azevedo (penalty shot) and Alex Bowen scored consecutive goals and even after Kevin Graham hit one to pull the score back to 8-6, the defending champions were quick to respond as Luca Cupido netted the 9-6 goal. And with just 1.38 remaining that advantage proved enough, despite the Canadians scoring twice more and coming utterly close. In the final seconds shots by USA’s captain Tony Azevedo (blocked) and Justin Boyd for Canada (saved) could not fall as Team USA held on for the close win and not much later saw their presence in Rio next year being confirmed…

The USA men fell to Brazil in an epic shootout at the World League Super Final in Bergamo, Italy earlier this summer.