Cal Berkeley men’s coach Kirk Everest arrived in Austin, Texas for the state’s high school water polo championships last Thursday. On Saturday he took a spot in the front row parked next to the parents of Timothy Simenc, one of his key 2015 recruits and a Texas preps star.

The evening’s highlight was to be Simenc and his St. Mark’s of Dallas teammates defending their state crown, though Everest demurred, saying he was just there to “check it all out.” What the Californian was unlikely to anticipate was his presence at a moment in Texas water polo history.

For the first time in the competition’s 40-plus year run a girls team from the Dallas area, Southlake Carroll, won the title beating Clear Springs, 11-8. St. Mark’s followed with an edgy 6-5 victory over a very game group from The Woodlands to repeat as boys’ champions. Two North Texas teams are now state champs – a first.

Until 2008 when the Lions earned their first crown, Houston-area teams won 20 consecutive boys’ titles and 24 of the last 27. The region’s girls were even more dominant winning 25 straight titles since 1990. 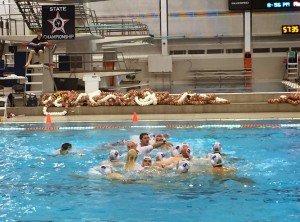 The teams from Dallas have shown steady improvement over the past five years as we noted a year ago. It would be provocative and entertaining to assert that North Texas was now poised to dominate the Texas prep scene – and they may. More likely and better for the sport is that power will be more evenly distributed between the two major regions with each sending better quality athletes and teams to the tournament.

And watch out for the West.

Nearly dead and long dormant, the region from which San Antonio formerly sent a decade’s worth of champions is re-emerging. Round Rock High School, just north of Austin, did something no team from the region has done in decades and perhaps ever: beaten or tied a team from Houston. The Dragons boys earned a 5-5 draw against Westside to place 11th in the tournament, the best result ever for an Austin-area team.

No threat yet to any of the three other Regions, all of which boast decades of meaningful experience. But another sign of increasing participation, quality, and variety.

Coach Everest showed up for a title tournament and got a bit of Lone Star State history as a bonus.